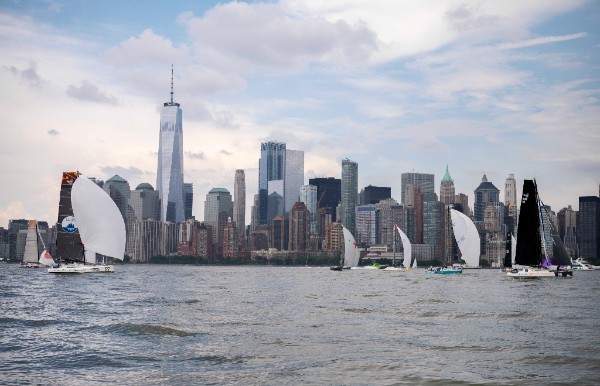 NEW YORK, N.Y. (June 3, 2018) – Following a light downwind start to the second leg of the 2018 Atlantic Cup, the conditions have deteriorated making for a brutal first 24-hours for the teams. The crews are currently battling 30 knots of breeze coming from the northeast in what's been described as a horrendous sea state.

The Class40 design is such that it launches off the top of waves, accelerating free from liquid drag before landing, belly first and pounding into the waves ahead. With the current weather conditions, many in the fleet have reported damage.

#37 First Light have reported significant damage to their solent and are heading for calmer waters to assess the damage.

#111 Power of One reported that the lashing holding the solent in place broke forcing them to climb the mast and make the required repair.

#128 Toothface has reported issues with their water ballast system leaving them unable to use it.

#81 Esprit Scout has reported similar issues of those seen by Power of One and are waiting for the conditions to subside prior to climbing their rig and re-lashing their solent.

With the low moving northeast over the fleet and the fleet turning north around Point Alpha, it's conceivable that the teams will stay within the northeast quadrant providing yet more challenging upwind sailing. However, there is enough disagreement within the weather models to make this next 24-hours very uncertain.

Michael Hennessy, #54 Dragon, is currently leading the fleet and provided this update, “It's been a tough morning, conditions are sporty, winds from the east peaking at 35 knots. The winds have dropped slightly to the mid-20s and clocked slightly to the south. We're taking a hitch back north again, trying to hold off our pursuers.

Liz Shaw O'Toole, #81 Esprit Scout: “You know morale is high onboard, but unfortunately we’ve had some set backs on the boat so we’re limping along through sporty conditions, but certainly nothing we’ve not seen before… We’re in 27 knots (of wind) right now, no big thing. We’ve had some excitement crashing through waves and as such we’re just unfortunately not able to push forward as we’d like to. If you look at the tracker in the wee hours of this morning while trying to keep up with the leading pack you’ll see us take a dive downwind as the lashing at the top of our solent failed. We were actually sailing quite happily with one reef in the main and solent and everything was going really well trying to keep pace with the front guys and then the lashing gave way. The solent normally flies all the time, you just furl it around the forestay instead of taking it down, but unfortunately with the lashing breaking we had to go forward and wrangle it, undo all of the other lashing and unzip it and get it back on the boat. It was a bit of a battle but nothing to terrible. The sail is intact, but unfortunately we cannot use it again until we can get up the rig and re-lash it.”

Teams will  face a building breeze this evening with wind speeds of 12-18 knots from the east gusting 20-24. The fleet will be racing upwind in a nasty sea state with short, choppy waves until they reach the Nantucket shoals and the only mark of the course. Once teams reach Point Alpha conditions will improve and current routing is anticipating a late Monday arrival.

Leg 2 takes competitors 360 nautical miles from New York to Portland, Maine. There is one mark of the course, Point Alpha, which is south of the Nantucket shoals. Overall in the standings French/Italian entry, #145-Eärendil is currently in first place with 22 points, followed by Amhas and Talanta. Both offshore legs of the Atlantic Cup are worth double points. The Atlantic Cup is scored on a high points system leaving 22 points up for grabs in this leg.

*Result pending protest to be heard in Portland, Maine.