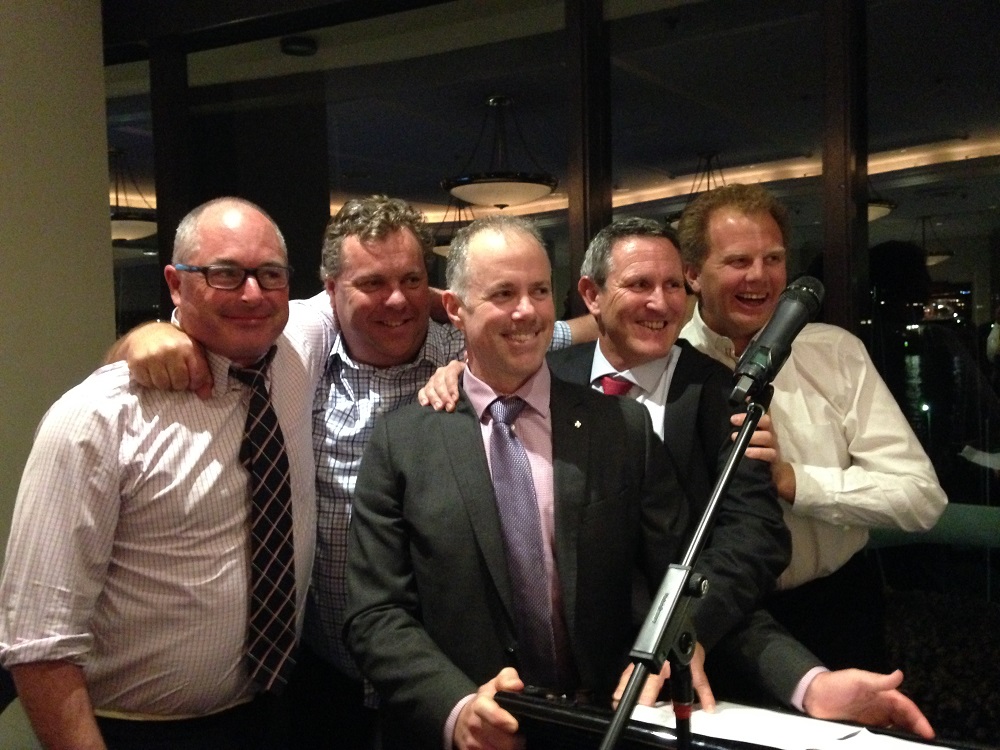 The Cruising Yacht Club of Australia’s (CYCA) SOLAS (Safety of Life at Sea) Trusts raised just under $30,000 at a dinner held at the Royal Sydney Yacht Squadron (RSYS) on Friday evening.

Guest speaker for the night was Commander Marc Pavillard RAN, who was accompanied on the night by his wife Sarah.

Commander Pavillard was an instrumental figure in the rescue of sailors in the 1998 Sydney Hobart, saving many lives as the winch coordinator in the Royal Australian Navy helicopter.  In particular, the lives of the Sword of Orion crew, who sadly lost a British crew member, Glynn Charles, when his safety harness failed.

Charles was among six who tragically lost their lives in the race that year, resulting in the CYCA SOLAS Trusts being established and is governed by a board of Trustees.

Having Commander Pavillard as guest speaker reminded us of how fragile life can be, particularly as some of the Sword of Orion crew also attended the night. “We try to get a table together every year,” said crew member Adam Brown, who was joined by Andrew Parkes, Sam Hunt and Nigel Russell on the eve of their 20 year reunion of that fateful race.

Martin James, a past commodore of the CYCA and fellow competitor in the race with his Team Jaguar Infinity, also attended with crew.

And while it was sobering to hear Pavillard recount some of what occurred, as vision of the race and rescues was shown, he also told of some funny moments.

“On December 27, 1998, I was in Sydney when I got the call that changed everything…,” he said. “Before I knew it, I was kissing the family goodbye and heading to Nowra. By midnight, I was flying (a helicopter) at maximum speed to Merimbula. We re-fuelled at 2.30am and then launched into the unknown…

“Within minutes, we were swallowed by the storm – the turbulence was terrible. We knew several yachts were in trouble. It was distressing – I felt full fear in the pit of my stomach. Just flying with other aircraft around – it was chaos.

He’s done it all, but, the Commander said, “This was by far the most harrowing – being part of the Sword of Orion guys’ rescues.”

David Kellett, who MC’d the evening, thanked Commander and Sarah Pavillard for attending.

SOLAS Trusts events are branching out and Kellett announced the following venues and dates for upcoming fundraisers:

2 November – Royal Yacht Club of Tasmania will host a lunch with guest speaker, Australian Wendy Tuck, the first female skipper to win a round the world yacht race (she won the Clipper Race this year). Details: https://www.ryct.org.au/

“Over $2 million has been donated by those participating in the sport with the vast majority coming from the CYCA and its members,” David Kellett said. “So far around $1.4 million has been distributed to search and rescue organisations and to needy families. The Trusts have made donations in every state and territory across Australia, making a difference to sailors and entire communities across our country.

“The Trusts have a 100% flow through to the beneficiary from donations making them unique, with all administration and management costs absorbed by the CYCA.”

Thanks to the many generous organisations who donated goods, and to those who just as generously put their hands in their pockets to help raise funds.

A stark reminder of all SOLAS stands for has been brought home to roost, with Australian Rescue Authorities leading a mission to rescue badly injured Indian solo sailor, Abhilash Tomy, whose yacht was dismasted deep in the South Indian Ocean after some of the fleet was hit by a vicious storm midway across the South Indian Ocean during the Golden Globe Race two days ago.