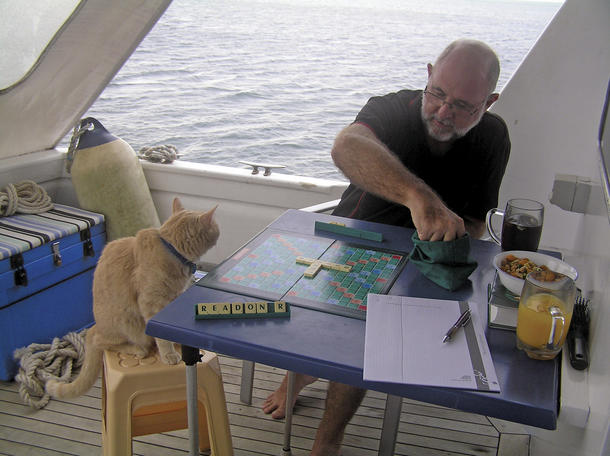 We have always had a cat in our household, so when we became boat dwellers we were happy to try having one on board. Meggs, a slightly cantankerous, desexed male cat was seven years old when we moved from our house to our new boat so we were a little unsure how it would work out.

There were teething problems. He was impossible to constrain to just our boat at a marina, his urge to roam was very strong. Luckily we had good neighbours and we distributed squirty bottles of water to those who did not want him exploring their boat.

It took Meggs a short while to get his sea legs and we nearly lost him overboard several time in the early days. There were a couple of ‘spit-ups’ on the carpet when we initially set off cruising. Happily for everyone, he quickly acclimatised to life at sea and actually seemed to enjoy it.

That first year we travelled a lot of miles, from Cairns to Broome and back to Darwin and he coped very well. He then spent five years as a resident marina cat in Darwin. He became well-known and, if not loved, at least respected. Occasional trips out of the marina on weekends and holidays kept him in touch with his sea legs.

In 2010 we planned to retire and cruise overseas for an indefinite period and the question arose about Meggs. Should we take him with us, knowing that the Australian Quarantine rules for animals returning to Australia are very strict and that he would not tolerate months in a cage?

Meggs was thirteen years old by this time so we decided to keep him with us and not return to Australia while Meggs was still alive. We added cat food to the stores list and we all left Darwin in September 2010 to cruise through South East Asia.

Meggs seemed very comfortable and happy on board as we cruised through Indonesia, Malaysia and the Philippines. He showed no interest in going ashore unless we were at a walk-on marina and then he quickly settled into a routine that did not upset the marina staff.

The locals who visited us on board loved to look at him and were in awe of his size. One small boy in Indonesia called him a lion! He spent most evenings on the foredeck surveying his surroundings. He found hidey holes down below to retreat to in rough weather.

When we initially entered Indonesia the Quarantine officer asked us if we had an animal on board, but was not interested in seeing him or asking further questions about vaccinations or his health. Since then, while travelling through Indonesia, Malaysia and the Philippines, we have never been asked by officials about having a pet on board. Friends cruising with their small dog in Peninsula Malaysia and Thailand have had the same experience.

Most marinas in Asia are very tolerant of animals on board. When entering a new marina we were never asked if we had a pet on board and if they later realised we did, there were no problems about it. Often the marina staff are intrigued about our sea-going cat and keen to pet him.

We always put a collar on him with an attached tag giving his name and our boat name, so people realise he is a pet, not a stray. We are vigilant about keeping the marina docks clean and will clean up after other animals if necessary, to avoid a blanket ‘no animals’ rule.

We have found that there is good veterinarian care available in Malaysia, Thailand and the larger cities of the Philippines if needed. We have even had local vets do boat calls to us. We have added annual rabies injections to the usual vaccinations just in case.

We are able stock up on pet food and other supplies, even kitty litter, in large towns but have learned that it is cheaper to feed Meggs fresh fish, chicken and a bit of whatever we eat. He actually preferred this to commercial cat food.

When needing to be away from the boat, to do some land travel or to return home for a holiday, we have always managed to find a like-minded yachtie or boatyard worker who will cat-sit for us. We have reciprocated by dog-sitting, transporting other people’s cats and feeding animals left on their own boats at a marina temporarily.

Sadly Meggs died during a passage in the Philippines at the age of 15. We were then back to just two humans on board. We continued on alone for six months but we really missed having a cat.

While in Sabah, Borneo we decided to drop into a local market one Sunday. By that afternoon we were the proud parents of six week old Max.

Having a new kitten on board was hard work and we were all driven up the wall at one stage. But Max quickly learned what he could and could not do. He adapted to his new environment, a pecking order was established and he started our retraining to be competent feline staff.

Max is now four years old and very much part of the crew. We have found that having a cat on board guarantees a constant source of unconditional friendship and companionship. Meggs and Max have both been great listeners when we complain about the lousy weather, the spouse, the dodgy toilet, the dwindling wine stock.

A cat is also a great conversation starter in a new marina: “sorry, my cat has been on your boat, but here is a spray bottle of water if you don’t want him on board. By the way, my name’s Sue and we’re from ….”

For us and many other cruisers we have met with animals on board, the pluses far outweigh the negatives of travelling with our feline companion. ≈