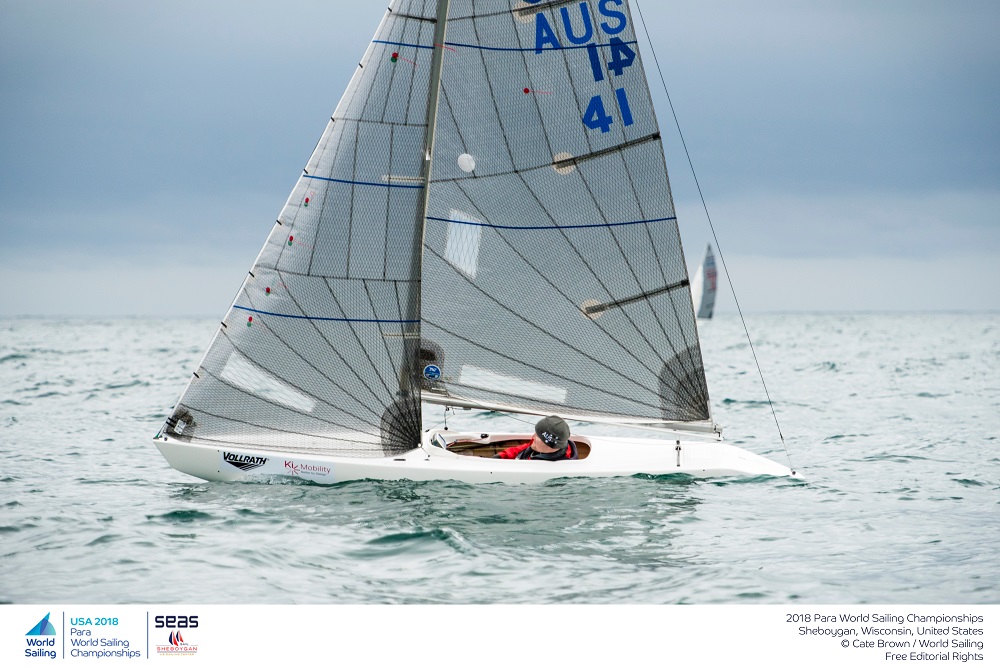 Australian, British and Brazilian competitors clinched Gold at the Para World Sailing Championships as the regatta drew to a close in Sheboygan, Wisconsin, USA.

Saturday's final day played out in variable breeze that ranged from 3-5 knots early on and ended with up to 10 knots.

After winning the final RS Venture Connect qualification race, Spain's Enrique Vives and Gabriel Barroso de Maria joined Alexandra Rickham and Hannah Stodel (GBR), John McRoberts and Scott Lutes (CAN) as well as Street and Currell on the start line for the Final.

The format of the race was simple; first past the line would claim gold.

In a fickle breeze which varied from 3-5 knots and quite often dropped below that, the four teams got off to a clean start. A fight for position unravelled but Street and Currell hit the first mark and were forced to do a 360-degree penalty turn, dropping to the back of the pack.

The wind was inconsistent across the track and a game of snakes and ladders unravelled. Street and Currell clawed themselves back into contention and they found some breeze to propel themselves to the front of the fleet to give them the victory.

“We had a lot of catching up to do after we hit the mark but we kept cool and sailed fast,” commented Currell. “We knew there was plenty of time left in the race and we kept a level head.

Spain's Enrique Vives and Gabriel Barroso de Maria narrowly beat John McRoberts and Scott Lutes (CAN) across the line to secure silver and the Canadians completed the podium.

Peterer crossed the start early, allowing Marques, Wickham and del Reino to fight each other hard off the line.

Marques was able to grab the lead and she extended to cross the line and claim gold. “For me, the most difficult thing this week was sailing in the light wind,” said Marques. “In Brazil, I trained in stronger winds. The competitors were all very strong and I'm just so happy.”

Wickham and del Reino fought hard for the silver medal, however it was the former who crossed in second to clinch it as the Spaniard settled for Bronze.

The top ten in the Men's Hansa 303 sailed a semi-final to decide which four would advance to the Final. Wademar Wozniak (POL), Jens Kroker (GER), Piotr Cichocki (POL) and Christopher Symonds (AUS), the four standout competitors this week, finished in the top four and progressed to the final.

In a tense battle, there was no let up as each racer demonstrated winning attributes. Kroker took the lead early on but his three rivals remained close by. Wozniak pulled level on the downwind but on the second upwind, the pack reshuffled.

Symonds took the lead before Wozniak was forced to do a penalty turn after a cross with Kroker. This allowed Wozniak to sneak through in second.

The Australian won the deciding race convincingly in the end but at the finish, the remaining three were split by less than 20cm. Wozniak did enough to pick up silver and 2017 World Champion Cichocki completed the podium.

Two points separated Damien Seguin (FRA), Matt Bugg (AUS) and Dee Smith (USA) ahead of the first ever 2.4 Norlin OD Medal Race, meaning that whoever finished ahead of the three would claim the title.

The trio was tight at the start, keeping each other within reach, but Bugg jumped ahead and held position to finish the Medal Race in third to seal Gold.

“It was a really tough, short race and really close. I managed to get ahead of both of them midway through the race and I  held on to my lead to take the championship,” Bugg said.

“Five or six years ago, I thought that winning a World Championship was a possibility, and it's taken this long for me to get the job done. It means the world to me and something I've worked for a very long time.”

It looked as if Smith would take silver and Seguin bronze midway through the race, but the French racer managed to climb up to steal silver. Smith completed the podium.

Seguin had trailed Smith in the race, but pulled ahead to finish in fourth.

The next Para World Sailing Championships will be held in Puerto Sherry, Spain in June 2019.