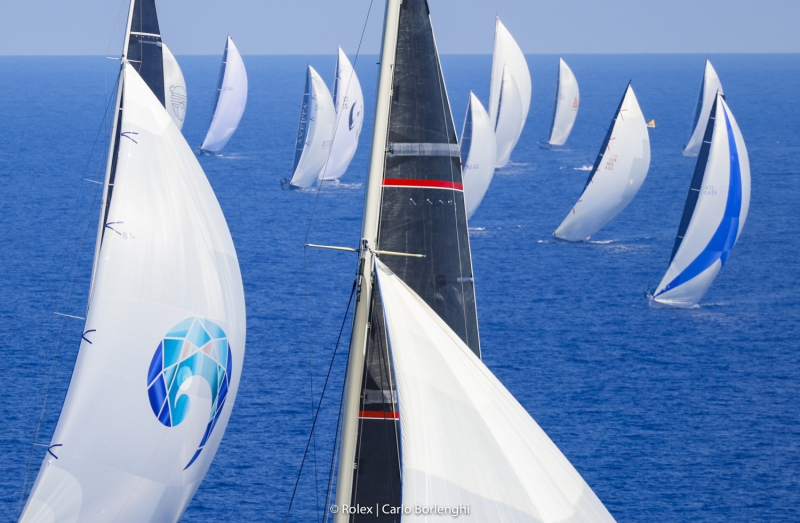 The second day of racing at the 31st Maxi Yacht Rolex Cup in Porto Cervo, Italy, brought light wind of eight to ten knots from the northeast.

The conditions were similar to yesterday’s but somewhat lighter, requiring a special effort from tacticians today in order to get the best from the shifting breeze. After two days of coastal races, the leaders of the provisional standings in their respective divisions remain unchanged, with very little movement in the positions behind them either.

The Race Committee drew up a shorter coastal route than yesterday, based on the lighter conditions, then made the decision to shorten the course, with a finish line off Capo Ferro, to make the most of today’s available breeze. In total the fastest boats covered around 20 nautical miles while the Mini Maxis had 15 miles.

After the start off Porto Cervo, all divisions headed for an offset mark positioned three nautical miles from the line. The Maxi yachts then embarked on a broad reach to the Secca di Tre Monti, and a tactical upwind leg to round Monaci island before a final reach to the finish. For the Mini Maxi 2, 3, 4 classes the return route was through the Bisce Pass after rounding the Secca di Tre Monti.

Winners of the day were Velsheda ahead of Topaz and Shamanna in the Supermaxi division, and Highland Fling XI ahead of Magic Carpet 3 and Y3K in the Maxi division. Bellamente had the better of Cannonball, who placed second today, but nevertheless maintains the leadership in the overall standings by one point. Third place of the day for Northstar of London.

Lorina 1895 took victory in the Mini Maxi 2 class, with Capricorn in second in today’s race but maintaining the lead in the general classification, again by a single point. In third place, both today and in the provisional overall rankings, is Aragon. Lyra racked up her second bullet in the Mini Maxi 3 division to remain at the top of the scoreboard ahead of Lupa of the Sea and Blue Oyster.

Terry Hutchinson, tactician on the Maxi72 Bella Mente and winner of the day in the Mini Maxi 1 class, said, “Today was another challenging day, as difficult as yesterday but actually both days we sailed very similar first beats and we were able to get to the top mark in the lead in both of them and today we were able to capitalise on it.

But the beat up from the Secca di Tre Monti there in the middle of Bomb Alley around Monaci, that was hard and we were running into the back of the class in front of us and it was light and puffy and shifty and Adrian Stead did a really good job of encouraging us, on the long starboard that we did, into a really nice lane there and that was really the difference maker, and we built a nice lead.

“Cannonball sailed a great race and got around Vesper, and did nice work. We have a lot of racing in front of us, we still have four races to go so a lot can happen.”