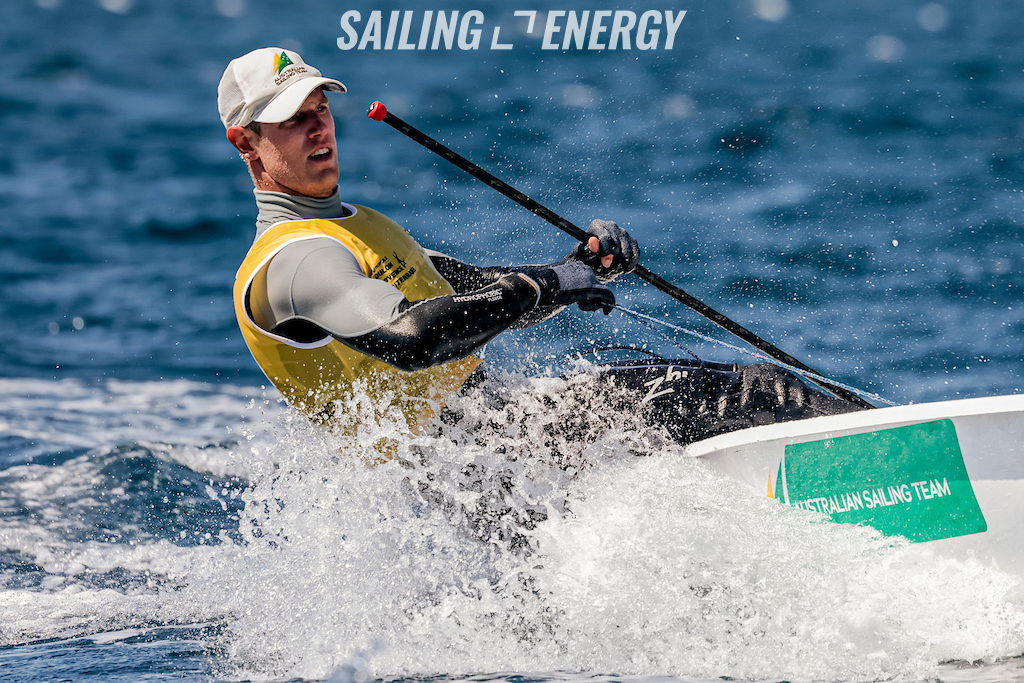 Olympic champion Matt Wearn (WA) continued his winning streak at the French Olympic Week Hyères, finishing first in both his fleet races on the second day of the regatta.

Once again, the Côte d’Azur put on great sailing conditions with 7-12 knots of winds for the morning fleets and 8-15 knots for most afternoon courses, with a full day of racing completed across all classes.

“We had a great day of sailing, a really good afternoon with the breeze coming in quite nicely,” Alexander said. “I had a good day myself with a five and a four in pretty tough racing. It was quite tricky with flat water and shifty conditions.

“Wearny was out there charging and we are all putting in some really good progress towards our worlds in Mexico (May 21-28). We are just taking a lot of lessons forward, especially after not a lot of racing. It’s all good things and there is plenty more to come.”

While the ILCA 7 fleets were one of the last ones out on the racecourses, the ILCA 6 (former Laser Radial) were part of the morning racing session. Zoe Thompson (WA) remains the best placed Australian in 10th, after she backed up a disappointing black flag in the first race with a ninth in the next race. Tokyo Olympian Mara Stransky (QLD) is ranked 17th, while Casey Imeneo (VIC) moves into 29th after finishing the day with a strong third place. Elyse Ainsworth (WA) sits in 30th after four races.

The Nacra 17 were also part of the morning session and managed to complete four races after only finishing one on Monday. Rio Olympic medallists Jason Waterhouse (NSW) and Lisa Darmanin (NSW), kept their results in the top 10, including a second place in race three to remain in fourth place overall. Jake Liddell (NSW) and Lucy Copeland (NSW) are ranked 14th.

The 49erFX fleet also made up for missed racing and completed four races with Laura Harding (VIC) and Annie Wilmot (NSW) scoring two top 10 results, posting a 3, 13, 14, 7 series. This sees them sitting in 13th place after six races.

“It was a pretty big day today to get back on track with the race schedule but it was nice to get lots of races done in less hectic conditions than yesterday,” said Harding. “We had a building breeze throughout the day so it was good to get a range of conditions over the course of the four races.

“We had some ups and downs but it was good to post a few good scores going into the last day of qualifying tomorrow.”

The day did not go as well for the 49erFX crew of London Olympian Olivia Price (NSW) and Evie Haseldine (NSW), who were not able to complete their last race after breaking their trap line. This saw them drop to 24th despite a fifth place in the penultimate race of the day.

In the 49er, Queenslanders Tom Needham and Joel Turner continue as the top ranked Australian boat in 21st (10, 13, 9), with Jack Ferguson and Max Paul following in 24th after a strong third place in their second race. Olympic gold medallist in the Laser Tom Burton (NSW) and Simon Hoffmann (NSW) scored a second in one of their fleet races (20, 2, 16) and sit in 27th. Jim Colley and Shaun O’Connor follow in 28th.

470 sailors Chris Charlwood (WA) and Amelia Catt (TAS) had another strong day scoring an eleventh and fifth place which moved them up to eighth place. Tokyo Olympian Nia Jerwood (WA) and Conor Nicholas (WA) were happy with their two top ten results in the mixed conditions, which sees them ranked 19th after four races.

“It was one of those days where you weren’t sure what was going to happen. One minute it’s hot, next minute it’s cold, first windy, then light, but that’s when the best racing comes out,” Nicholas said describing the day.

“We sailed solidly and put two top ten results in the bag,” Jerwood added. “We are just in qualifying at the moment and it will get harder if you do get to gold fleet but we are just taking it one race at a time.”

Queenslander Breiana Whitehead is ranked 13th in the Kite after eight races and is enjoying the learning opportunity of racing at an Olympic class event.

“I’ve had a good time in Hyeres so far. We’ve had some mixed conditions, but the racing over the last two days has been pretty windy. I had a few kite changes and a few crashes and few good scores, so I’m learning a lot.”

Racing continues at the French Olympic Week Hyères on Wednesday, 27 April 2022 from 11 a.m. local time. For the events split into fleets, it is the last day of qualifying, before two days of final series. See the race schedule here: https://sof.ffvoile.fr/official-notice-board/