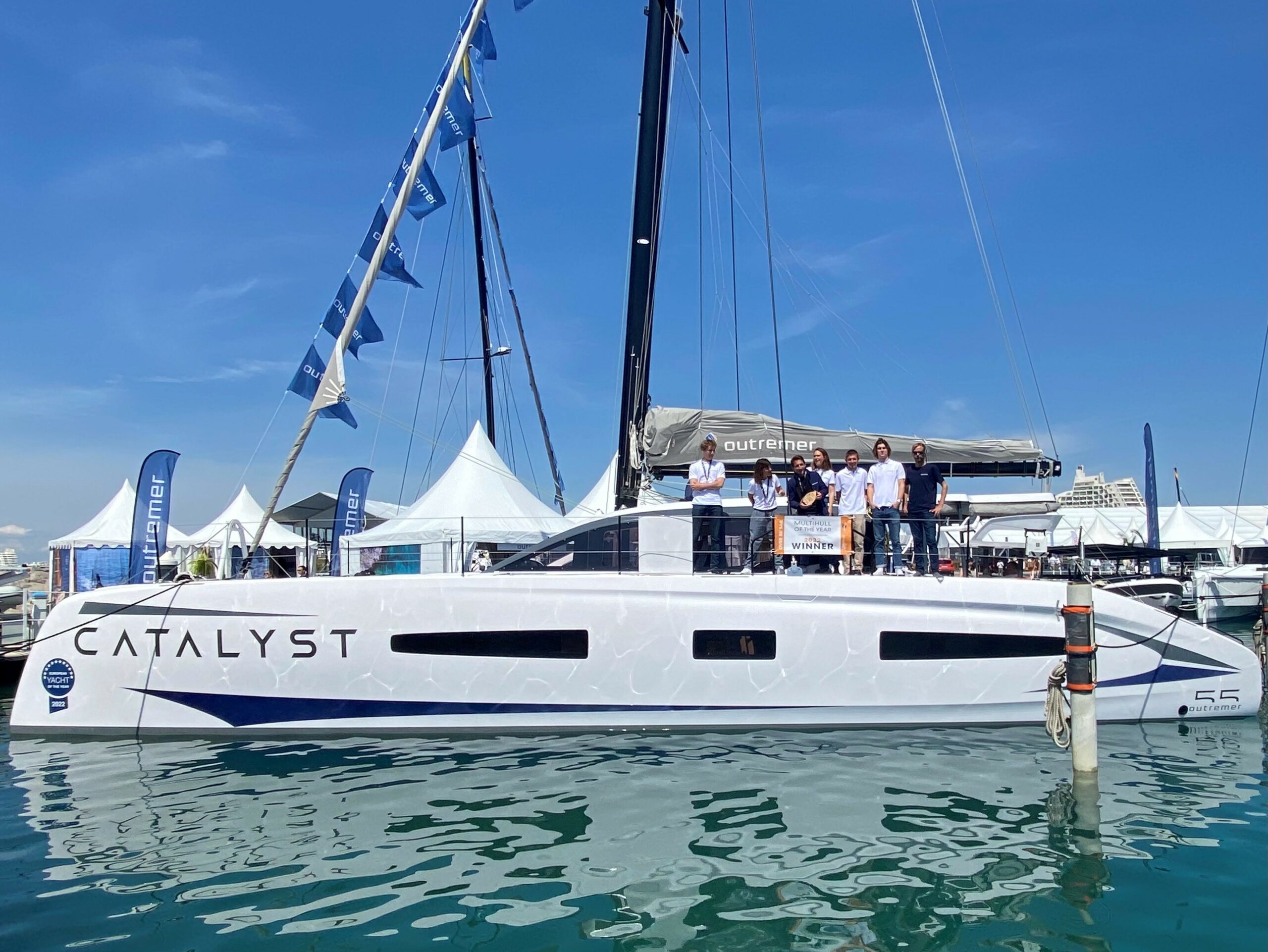 Catalyst, an Outremer 55, awarded Multihull of the Year at the International Multihull Show 2022. Pic - Marie Lapierre

The blue water catamaran brand welcomed new prospects into the close-knit Outremer community as it experienced a surge in demand at the International Multihull Show in France from Wednesday to Sunday, 20-24 April.

Select press also enjoyed a tour of the Outremer Shipyard, located next to the boat show at the heart of La Grande-Motte, including a sneak preview of the much-anticipated flax fibre 5X We, Explore project with Roland Jourdain.

Benefiting from the increasing trend toward performance-based catamarans without compromise on comfort and interior design, Outremer showcased its flagship models to a steady stream of press, boat-owners and prospective boat-owners at the show, with more than 800 visits to the stand over the five days of the show. This included the bestselling Outremer 45, Outremer 51, and the European Yacht of the Year 2022 winner, the Outremer 55, which was also awarded Multihull of the Year 2022 during the show.

Located just a few meters from the heart of La Grande-Motte, the Outremer Shipyard revealed some of its manufacturing secrets, including the Outremer workshop, and the new 55’ construction building.

“When you build a sailboat with Outremer, we work with you as a team to deliver a boat without compromise that will ensure the safety of your family for years to come. More than that, we accompany our clients every step of the way to help them prepare for their blue water cruising journey  – this is what lies at the heart of the Outremer Shipyard,” said Outremer Executive Director Stéphane Grimault.

The tour also included a preview of the flax fibre 5X, which is in the final phases of the build for Roland Jourdain’s specially designed sustainable project We, Explore. The French yachtsman, who will be taking this innovative catamaran to race in the next Route du Rhum, was there to explain the ethos and drive of this collaborative project.

“Outremer and myself share the same vision: to develop a truly sustainable boat. We have been working hard together to build a boat that is made from as much flax fibre as possible, and as little of the fiberglass as possible. This is just the beginning of our journey towards a sustainable future,” explained Roland at the preview.

The official launch of the We, Explore will take place on 5May at Outremer’s shipyard in La Grande-Motte.

Since 1984, Outremer has been building safe, seaworthy and comfortable catamarans, specially designed for long-distance cruising with complete peace of mind. Performance and reliability are an integral part of the Outremer ethos. These qualities are reflected in the aesthetics and features of our catamarans.

With over 350 crews sailing around the world, and millions of nautical miles sailed, Outremer has created a unique community of enthusiasts. Their experience is a source of innovation and continuous improvement, making Outremer a key player in ocean cruising worldwide.

The vocation of the Grand Large Yachting group is to enable those wishing to travel to make their dream of long-distance cruising come true by providing them with all the elements they need to do so with complete peace of mind and respect for the planet.

Founded in 2003, Grand Large Yachting, with its shipyards Allures, Garcia, Gunboat, Outremer and RM, is the international leader in ocean cruising. It offers sailboats for all types of voyages, with one or two hulls, in aluminum, composite, carbon or wood.

Recognized for the quality of its reliable sailboats, the group is known for – and specialises in – accompanying its sailors throughout their voyage, from the idea to the return.