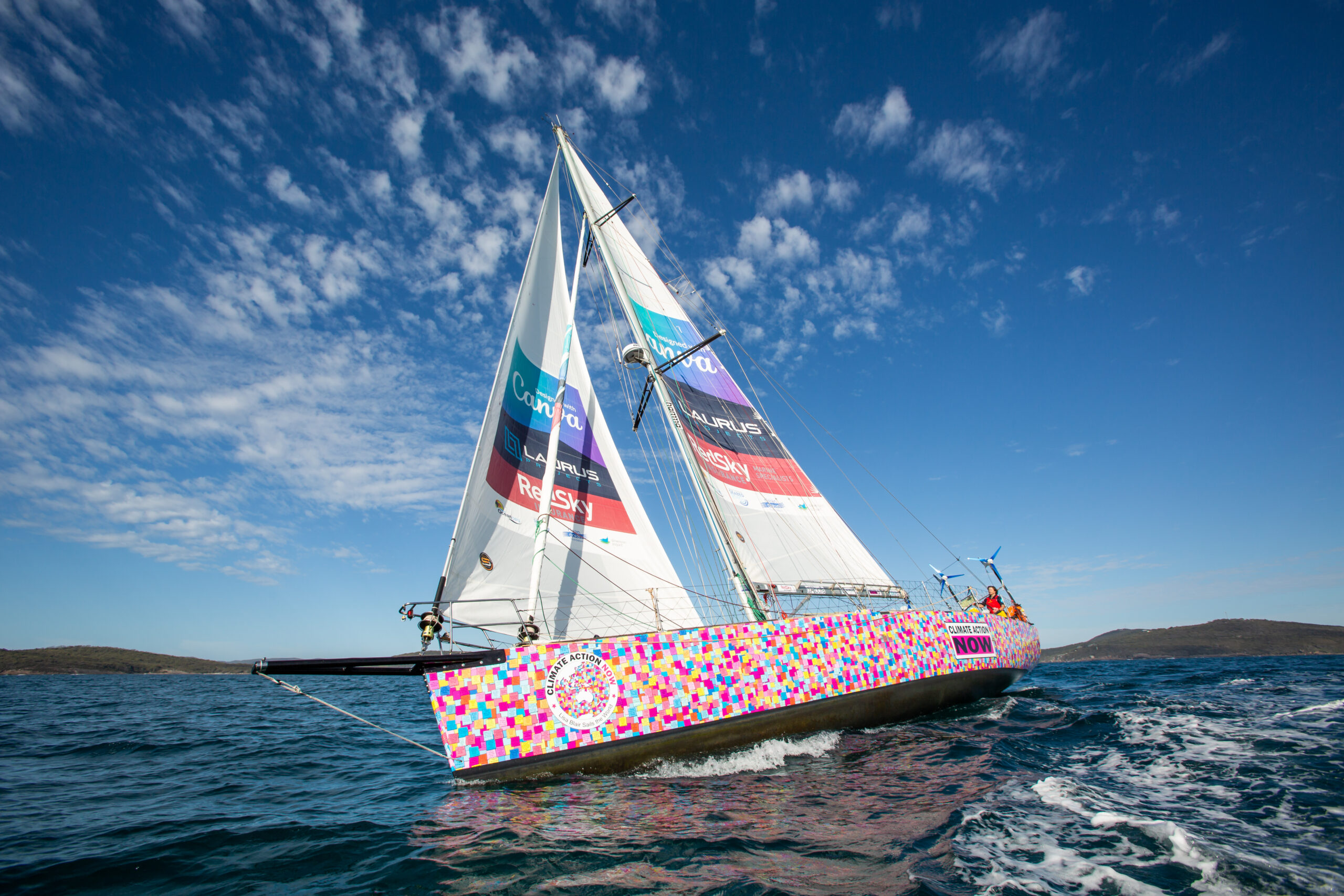 In her latest blog post, Lisa Blair spends more than an hour ‘upside down’ attempting to fix a biodiesel engine.

Well, after completing the blog yesterday and saying I was off to bed…..that didn’t really happen.

Just as I was going through the motions of brushing my teeth and getting ready, I also checked on the batteries and noticed that I would need to run the Volvo Penta Engine to charge for a bit. The only issue with this is that my day tank (the tank that the engine pulls Bio-diesel fuel from) is empty, so I needed to transfer some of the fuel from one of the side holding tanks to the day tank.

If you remember, in the beginning of this trip my fuel transfer pump died, and I needed to re-plum the system with an old spare manual bilge pump. Well, the last time I topped up my day tank I noticed that a fair amount of fuel was starting to leak out of the manual pump while completing the transfer. I could see that there was a screw that holds these two flat disks together that pinch the rubber of the pump and it was working loose. It wasn’t a major fix, but I needed to strip the pump apart and rebuild it before I could top up my day tank.

So, I ended up lying almost upside down under the navigation station for over an hour trying to pull the pump apart and fix it. I was able to get it done, but it was super awkward. We are still in gale conditions here, six metre swell and rounding up into the wind every 20 minutes. I was spending most of the hour trying not to bash my head on the bottom of the navigation station while working on teeny-tiny screws.

Once that was done, I was finally able to pump the bio diesel supplied by Biodiesel Industries Australia with support from Refuelling Solutions across and start the engine. Because I am using biodiesel, we installed a second heat exchange on the engine so that it can heat up the fuel before it enters the fuel filters. Biodiesel is basically recycled cooking oil that has been refined, but it can thicken in colder climates causing it to block the fine fuel filter and restrict the fuel flow to the engine, causing it to stop.

So, once it is going, the heat exchanger uses the hot water off the engine to run it past the fuel and heats it up preventing this, but I need to get it going and up to temperatures first. It’s always a little process which requires me to take off the top of the engine housing in the middle of the boat. In these seas that is always a chore.

With full access to the engine I start the motor, then, where the fine fuel filter is, there is a hand mini fuel pump used for bleeding the air out of the engine, I use this to force the fuel through the filter. Every time the engine hunts for revs I just give it a few pushes and it works fine again. It normally takes about 10 minutes of this process to heat up enough to warm the fuel and not require me. So finally, nearly two hours after I was going to bed, I had the engine going out of gear to charge up the Victron Lithium system that Safiery designed and I was able to crawl into bed at 1am.

I was wired now from working on the engine so it took me a while to start to fall asleep. Nearly 1.5 hours after crawling into bed and just about asleep, I heard the engine hunt for revs. This is when the volume of the purr of the engine changes and normally tells you that there is no fuel, or you have clogged filters etc. As I lay in bed only wanting to sleep the engine choked to a stop. I needed to get up and start the whole turning on process again.

Another thing with Biodiesel is that it tends to hold more water than normal diesel, so you can’t store it for as long. You can get growth in your tanks, but six months would be fine. However, I am in the Southern Ocean. The difference of temperatures is naturally causing condensation, and the bio diesel seems to be absorbing more water, causing my racor, or water separator filters to fill up quite fast.

With the engine stopped I realised that the filters were likely full of water again and needed changing out. It was not something I wanted to do at 2am so I tried to get the engine gong a few more times. After an hour I decided to worry about it tomorrow and went back to bed.  I had generated enough charge in the Victron Lithium Batteries to see me through until tomorrow without any problems.

So now it was 3am and unfortunately, I needed to wake up an hour later and do the first micro plastic sample change before sneaking in another 1.5 hours between sample changes. At 6am the first signs of morning were shining through, and it was time to go on deck and put a gybe in. The winds were meant to be blowing in from the west but had shifted more to the southwest earlier than expected.

I had been sailing a rather steep course to the NE all night trying to get up to 47 30S and above the worse of the swells that were coming through from this current system. I have now crossed over the 47 30S latitude and so it was time to gybe and start going east again.

I ended up putting on my Musto salopettes, mid-layer jacket, Dubarry boots and even Gloves.  It didn’t look pretty outside, and I figured I was going to get wet. With my lack of sleep, I wasn’t really in the mood for a salty dunking in icy waters, so I was going out armed.

The winds were still coming in at mostly 35 knots gusting up to 40 knots now, so I also knew that it was going to be a little hectic gybing in these conditions with the six-metre swell and the winds combined. I was right, between the swell and the winds it was a little bit of an all-on gybe, but I managed to safely get the boat through and we were now holding a course of 090 T.

Before I scrambled on deck however I had actually pre-made my porridge. I have a little secret to share with you all which I am hoping you love as much as I do. Just before leaving Brisbane to sail Climate Action now to Albany, I met a lady Joanne who makes these heat retention ovens called Easy Ovens. They are fabric cooking pot ovens that do most of the cooking for you allowing you to save on fuel.

For something like a curry, you put all your ingredients in and boil for 10 minutes and then pop your pot in the Easy Oven. It will keep cooking your meal for you so you can be free to do something else or save on fuel. Joanne does a lot of disaster relief work in remote locations with these because they really save that much fuel.

When I learnt of them, I could instantly see a use on board yachts or for camping and hiking and scenarios where the fuel is a limited resource.  Joanne was kind enough to make me a single pot version for one and I have been using it for most of the trip to re-hydrate my freeze-dried meals in it or to make my beloved porridge in it. So before going on deck I had quickly thrown together the ingredients of my porridge into the mini pot, brought it to a boil, locked the lid on and popped it in my Easy Oven.

Now 30 minutes later and I was able to come down off the deck and right away, open the easy oven and enjoy breakfast.  It only takes about 10 minutes for it to finish cooking the rest of the porridge, but it will keep it hot for over an hour, even in these temperatures.

I really wanted to test this out before sharing it with you all and I am so in love and use it so often that we will be selling these via my website. If you are interested, and you make one-pot dishes at sea, or on land, then watch this space.  You can purchase an Easy Oven featuring the Antarctica 2022 project badge (coming very soon) and you can learn more about how they work and the work that Joanne is doing in relief efforts from Easy Ovens Website here.

So, given that I had only managed about two hours sleep and I now had a full belly, I was aiming to go back to bed to try for some more sleep. While I remained in bed for nearly five hours, sleep was an elusive thing. Between the auto pilot alarms when the squalls hit and me having woken up too much with the gybe and breakfast that I eventually just gave up and got up.

The conditions remained mostly around 35 knots, but I was starting to see 42 knots in the gusts. Now, after the gybe, we were on a bad angle with the swell. We were rounding up more than before, so there was little I could do in those conditions except stay protected in the navigation station until nightfall.

Thankfully the rest of the day was non-eventful and after making a large pot of noodles I crashed into bed at 8pm for a few hours to tide me over before waking up to write this blog for you all.  So now I am very much, ready to go back to bed.

There are no degree sponsors tonight, but there is still amble time to get involved if you can support. You can find more information here.  We are still struggling to raise the final amount to cover the project costs so if you can help in any way that would be greatly appreciated.

Instead tonight I would like to thank some of the volunteers who have been working hard in the background to get you all these updates.

– Siim Ots for building me the tracker system and overlaying my previous boat and Fedors boat, for you to follow – http://tracker.ee
– Linda Blair (aka Mum) who is putting my blogs up every day for you all to read.
– Shelley Wright for making herself a point of contact for media.
– Jenny Rickerby and Karyn Gojnich for posting and organising any degrees sold while I am at sea.
– Caitlin Harris for helping with keeping the email updates going out and many other computer jobs.
– Jo Hansen for assisting in the gaps as needed.

Thank you all for putting your hand up to support me while I am at sea. I really appreciate it.