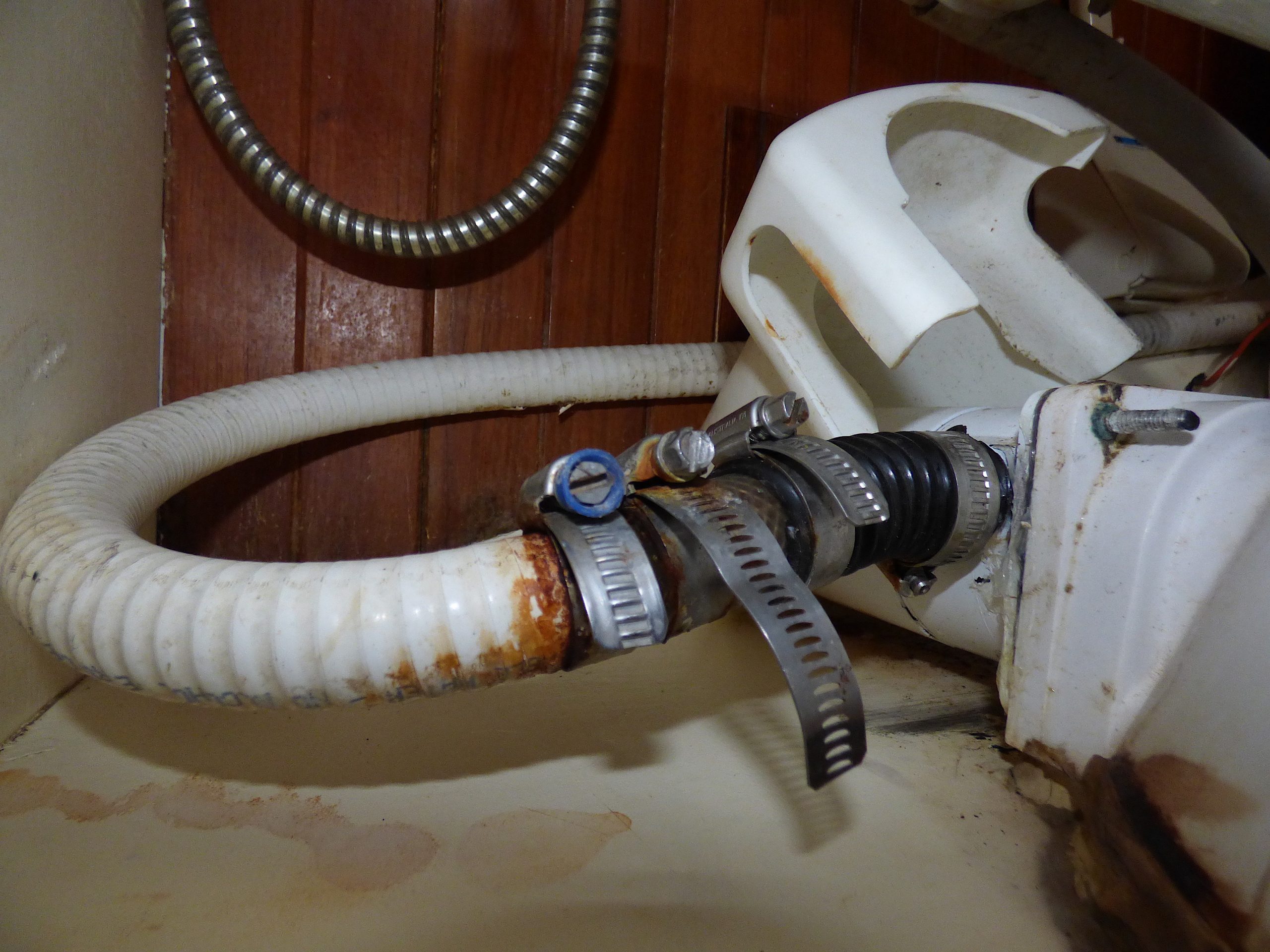 The Purple Heart is well-known as a US military decoration, awarded to the unfortunates who are wounded in the pursuit of duty. Having been around for quite a while I believe maybe it is time this distinction was extended to the cruising fraternity who have suffered in the pursuit of their duty.

Rather than taking a bullet, a piece of shrapnel or any of the thousand other ways to damage weak human flesh, cruisers are more frequently damaged in the pocket or the pride. If the ‘Purple Heart of Cruising’ medal was ever struck and awarded, I and many others would have a chestful; along with correspondingly low self esteem.

There are many ways to earn this distinction, it is limited only by one’s capacity for personal folly, lack of preperation and financial meanness. Here are a few of the more popular examples.

May as well start with a big one. This will represent one of the most exciting days of your life; should your life continue after the event.

It involves a big, tall, aluminium or maybe timber thingy falling overboard, if you are lucky; or on the deck if you are not. It is definitely not mentioned in brochures and best avoided.

There can, of course, be many reasons for this major event, some of which may well be out of our control such as a cyclone hitting a marina where your boat is stowed, secured and prepared absolutely by the book, only to have the mast head struck by some enormous flying debris type object that brings the lot down.

No Purple Heart is awarded for this; you have done no wrong, committed no folly and so are not entitled to the decoration or the loss of esteem.

Far more likely to bring down your mast will be age and the affliction of deep pockets with short arms. Standing rigging, as we all know, is only good for about ten years maximum; often less depending on location, use and type. But, when it comes time to shell out the $10k or so to replace it, there are many reasons, all sound and logical, for not doing so.

“Looks perfect, no rust at all, just like new” is an old favourite reason and may be true; but, if you have swaged fittings rather than the mechanical type, which can be disassembled for inspection within, you really have no clue as to the internal condition and this is exactly where it will fail. The wire pulls out of the swage under load, mast immediately breaks at the, now, unsupported point and we are left running around like drunken lumberjacks in a tree-felling circus.

So, if your rigging wire is more than ten years old, you are certainly in the running for this edition of the Purple Heart with Mast clusters.

One of my favourites, I never seem to tire of losing dinghies and there are a few creative ways of doing so.

Booze makes it easier and I imagine many people have woken up after a night out to find the dinghy is not obediently bobbing on its painter astern of the boat. Painter is the clue here, it needs to be secured to the boat when you get out.

Sometimes you get lucky, I was trolling a lure once, northbound up the NSW coast happily reading or such when the fishing reel started screaming, which is always a motivating sound. Leaping into action I saw the catch about 100 metres back: it was our own dinghy, which had come adrift and, thanks to Boofhead the patron saint of utter imbeciles, had run into the fishing line and hooked up. No idea why it came loose but the inflatable dinghy was luckily retreived undamaged by the hooks and  returned to custody.

Of course there are many more ways to earn the Purple Heart with Dinghy clusters and not all of them require you to actually lose it, even temporarily.

Capsizing also qualifies. Like to ride the small waves over sand bars in the dinghy? I did and thought eight horsepower would be a significant advantage; it was too but I should have quit while ahead instead of trying additional manoeuvres until the inevitable wipeout.

Yet another way to earn this decoration is to see your dinghy in a blow hovering  astern like some levitating demon in a horror movie, painter horizontal with the water at boat cleat level.

You just know it is going to turn over on the way down and it usually does; same concept as bread always falling buttered side down. The odds are better in roulette.

The propellor or ‘screw’, a very descriptive term not only for how it operates but also what it can do to you. If this little beauty gets stuck on something all manner of mayhem can result.

Many things are capable of hindering this desirable rotation but the common favourite must be rope, this rope often has a name, it is called a painter and it will be attached to our dinghy and our boat.

Usually happens when anchoring but is popular in any circumstance where reverse gear is required. If you do not wear this decoration, we shall call it the Propellor Clusters since Screw Clusters sounds a bit raunchy for this publication, then you have not done much cruising and have this experience and decoration to look forward to. Because it will happen.

Of course there are many hazards to rotation, some people put a spur or line cutter on the drive shaft just forward of the propellor and this whirring blade will deal mercilessly with unwanted lines including your own without discrimination.

My personal favourite is a rice sack. We had the pleasure of collecting said sack during an attempt to cross the traffic separation scheme in the Singapore Straits. Tankers, freighters, container ships and the like everywhere, bearing down from either direction at 15 knots; suddenly the Kenny Rogers song springs to mind: “You picked a fine time to leave me, propellor”.

The Purple Propellor is not a particularly prestigious award in the category, quite common and frequently requires two or more people to share the responsibility: “ I told you to pull the damn dinghy in!” So the acclaim is diluted as a consequence. The Purple Propellor Single Handed is being considered for unassisted achievement.

Ever heard the old cliché: there are two types of skipper: those who have already run aground and those who will?

True words, at least in my acquaintance, but this decoration has a number of varieties: the Purple Mud is common and my personal favourite, usually occurs in sneaky inland waterways, rivers and such where keelboats should fear to tread; tread being the operative word.

The Purple Reef is somewhat more serious and is the friend of the boatyard, foe of the insurance company; not many people wear this decoration to the yacht club.

Worst of the lot must be the Purple Cliff but to my knowledge is confined to Italian mariners.

These confusing items probably account for more long term suffering than any other category.

Countless are the hordes of sailors who struggle to keep a battery charged and life aboard habitable; an initially enthusiastic partner can quickly morph into a character asassin. Without power, without light, without refrigeration and so without hope. Heard it all before and will hear it all again.

This one is called the Purple Heart with Acid clusters and can lead to delusions and hallucinations. The good news is that with the increasingly mainstream availability of LiFePO4 battery technology this decoration will eventually fade away, but will take a long while yet due to the serious deep pockets/short arms condition mentioned previously. So plenty of time to collect your Purple Acid merit badge.

Yes, sails are strong everyone knows that, but sometimes the wind or other things are stronger. That means as the wind increases we make the sails smaller or at least we should.

Ever been sailing in the same direction as another boat? I have, ever reduce sail in those circumstances? I thought not. Times like these the wind might be stronger than the sail, not our fault of course and there is a certain panache to display the Purple Dacron; indeed many people have been known to stammer with delight when introduced to a Gallant resplendant with the Purple Kevlar or (swoon) even the Purple Carbon!

Light air sails are useful items allowing us to keep moving when the wind is not strong enough for regular sails. Big, light and oh so colourful they make a delightful spectacle; until we become the spectacle trying to get the thing either out of the water, free of the mast, free of somebody elses rigging or just picking up all the little fragments, which is all that remains of our proud and strong spinnaker that clearly does not like sharp things.

The Purple Heart with Nylon clusters represents an essential component of professional and amateur sail training. Make sure you wear it to your local sailmaker.

The objective of anchoring is indeed to be in the same place until you decide of your own volition to go eslewhere. It does not always work out like this.

Sometimes boats drag anchor and head off without permission; AWOL as it were, to continue the military theme. Sadly, we have no recourse to punish our wayward vessel for the transgression unless you consider a marina as a prison; sure some are, but vessel behaviour is unlikely to be reformed by such discipline.

What we need is probably a bigger anchor; so how big is enough? Easy answer: never was one too big, only too small. Of course there is much more to it than this, as any Purple Heart with Anchor cluster wearer, they are legion, will tell you and in some instances may even be right.

The antipode of this is when you do remain in the same place, but you are the only one. This becomes a bit of a lottery: wind, wave and current all conspire to determine if that dragging boat is going to hit you or not. A glancing blow, a massive direct hit or will it pick up your chain and drag you like a poodle on a leash? All and more is possible, all has already occurred and will certainly occur again.

So the opportunities to earn Purple Hearts of Cruising are nearly endless, all it takes is negligence, tight fistedness and good old fasioned stupidity to have a chest full of medals like the rest of us. ≈