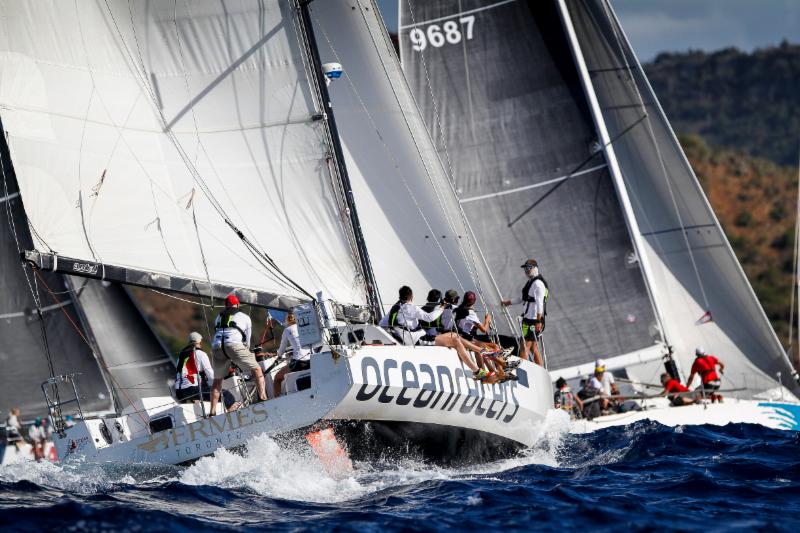 The American turbo-charged Volvo 70 Warrior, sailed by Stephen Murray Jr. is expected to be the front runner and their current estimated elapsed time is inside the record set last year of 3 days, 20 hours, 32 mins, 41 secs. “Sailors superstition prevents me from predicting elapsed time, but we are optimistic we can shave off quite a bit of time from last year,” commented Warrior's Stephen Murray Jr.

“Our goals are a repeat of last year's grand slam; winning CSA, IRC and a new course record, and we would also love to be the first recipient of the new Warrior Trophy for best IRC performance. We are so excited to have great competition from some very hot boats. This year, we will have our work cut out for us to beat Varuna and Teasing Machine; two proven winners in grand prix racing. As always, we hope to get recognition to the mission of Warrior Sailing, helping veterans through the sport of sailing. A strong showing against this stiff competition will hopefully spread the word about Warrior Sailing.”

Jens Kellinghusen's German Ker 56 Varuna will revel in the reaching conditions and should prove very adept at the VMG running conditions predicted for later in the race. Three Spanish Volvo Ocean Race sailors will strengthen the solid German team; Guillermo Altadill has competed in six round the world races, Chuny Bermúdez won the last edition of the Volvo Ocean Race, and Jaime Arbones is a veteran of ocean racing. “It will be critical to sail fast for the first 50 or so hours,” commented Guillermo Altadill.

“The further north we get in the good pressure will reduce the impact of the lighter winds predicted near to Bermuda. Once we start to get into the high pressure it is likely that we will sail west to get a hot angle into Bermuda.”

Arnt Bruhns sailing Iskareen has completed a solo 1,400 mile qualification for the Route du Rhum, just days before the start of the Antigua Bermuda Race: “I have been sailing around the Caribbean islands for the last eight days,” commented Arnt Bruhns. For the Antigua Bermuda Race we will be four on board which will be the same crew for the Atlantic Anniversary Regatta Race from Bermuda to Hamburg this summer.”

Like Iskareen, Hanns Ostmeier's Swan 45 High Yield will be competing in the Bermuda to Hamburg Transatlantic Race: “We have a crew of six, ranging in age from 30 to 70 years of age who are all from Hamburg. The race to Bermuda is an ideal way to get to the start of the Transatlantic Race this summer, and six is an ideal number. We will have a larger crew for the Atlantic Anniversary Regatta,” commented Hanns Ostmeier.

Eric de Turckheim's French Nivelt-Muratet 54 Teasing Machine is highly optimised for IRC but will not be as fast in the reaching conditions as Warrior and Varuna (which both have a canting keel). However, the highly experienced French team, including Volvo Ocean Race winner Laurent Pages have shown impressive tactical and boat handling skills whilst winning the RORC Transatlantic Race.

The lighter downwind conditions towards the end of the race may give the French team their chance to win on corrected time: “We may find that if the breeze does go light towards the end of the race, we might catch up the faster boats, but that may also be the same for us from the boats behind us,” commented Laurent Pages. “Right now, before the race, we are focusing on our boat preparation and we will look more at our strategy once the race has started.”

The international fleet for the Antigua Bermuda Race includes Jeremi Jablonski's American Hanse 43 Avanti which is back and looking forward to the race. Avanti was runner-up last year in both CSA and IRC. Canadian entries include Morgan Watson's Pogo 12.50 Hermes, Juan Grunwaldt's Bavaria 56 is from Uruguay, and Louis Goor's Oyster 575 Irene III from Ireland.

Meg Reilly; co-skipper on Pogo 12.50 Hermes with Morgen Watson are both from Canada and will be joined by two crew from America and Portugal. “Current polars have us taking around 5.5 days to get to Bermuda. It is a true ocean race, and there aren't many of them! The team Ocean Racers is very excited to be concluding the Caribbean regatta season and kicking off our offshore racing season with the Antigua Bermuda Race! It's a much more enjoyable course than the other famed ocean races to Bermuda; avoiding the Gulf Stream and cruising along in reaching conditions. We should be able to run our big kite for at least the first half of the race which will make life comfortable and fast on board. The big challenge will be the last 300 miles or so where the wind will lighten and we will struggle to make the same amount of miles we will in the first few days.”