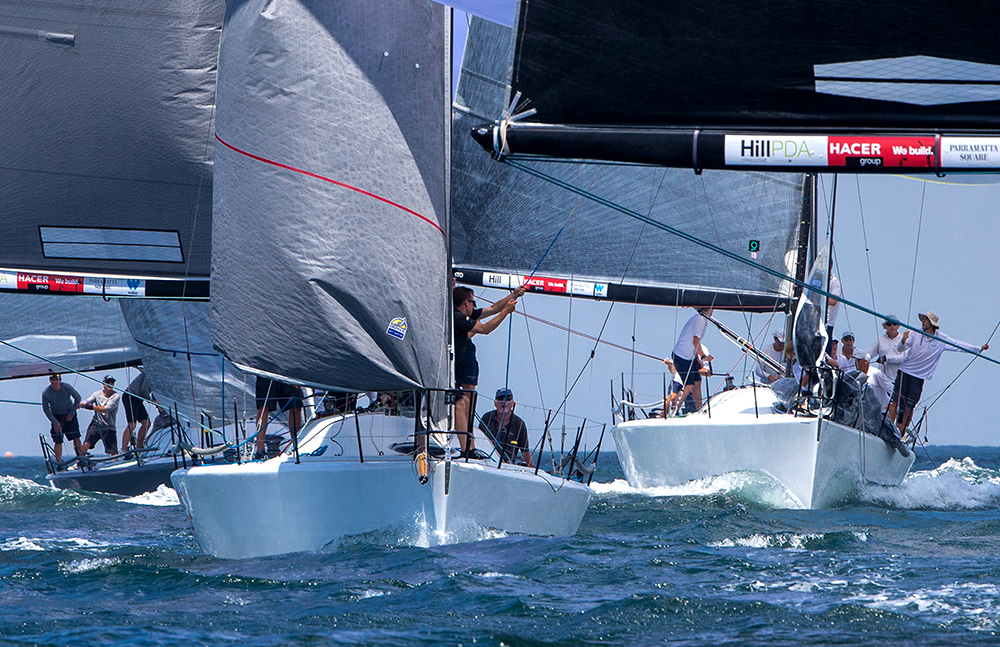 Martin Hill’s Estate Master narrowly beat the runner up on the final day of the Farr 40 NSW State Title 2017 that wrapped up on Sydney Harbour in strong sou’east winds.

The days when Estate Master and what used to be Transfusion locked horns resumed at the two-day title. The pair were even on 10 points going into race six then Belgiorno-Nettis’ Angophora got mixed up with Gordon Ketelbey’s Zen at a top mark rounding.

Hill and his tactician David Chapman kept clear of the fleet and sailed into second in the 18-22 knot breeze while Belgiorno-Nettis lost touch with Estate Master and finished fifth, putting the state championship title out of the team’s reach despite Angophora’s follow up bullet in race seven.

Back at Middle Harbour Yacht Club as 30 knot gusts whistled through the marina, a delighted Hill, who won overall by two points, said, “It’s very very tight out there. Estate Master has been at all the regattas and you can see that in the consistency, plus the boat’s really quick upwind. It looks easy at the end of the day, but I tell you what, it’s hard. Four races was enough.

“We had a good mix of conditions for this series, light yesterday then over 20 knots in that last race. When you think you have an advantage in this fleet, don’t rest on that thought too long. Farr 40 racing is all about the fundamentals; good starts, hiking hard, very good trim. It’s a game of inches, we were able to save rather than lose inches.”

At the trophy presentation Hill gave special thanks to his core team of amateur crew. “I’d like to thank the professionals but it’s a team of 10 and it’s the amateurs who give us an all-round performance. It’s fantastic the effort they all put in and I’m looking forward to the Sydney Harbour Regatta and the nationals in March.”

“It’s so great to be back with some new young guys on the boat, like Finn,” said Belgiorno-Nettis. “Considering it was our first time back we didn’t make too many mistakes. Congratulations to Marty and his team; they worked really hard.”

The two frontrunners put a large points hole between them and the rest of the field. Third overall was Jeff Carter’s Corinthian team on Edake.