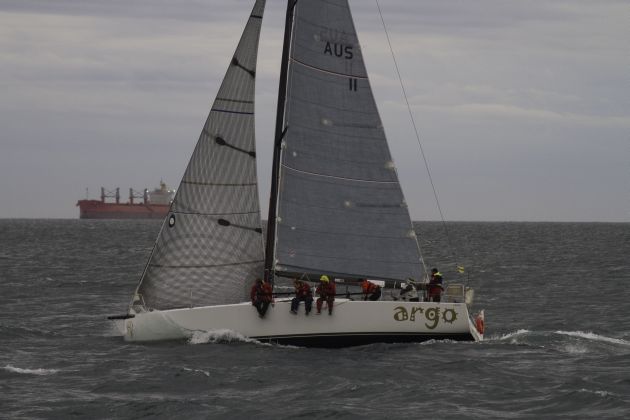 Argo heads out to sea on her way to an overall win in the IRC division. Fresh south easterly winds reaching 40 knots tested all crews and resulted in a lost rig for Anthony Kirke’s Enterprise. Photo credit – Bernie Kaaks

Anthony Kirke’s Enterprise, a Farr40 which has been enjoying a stellar season to date, snapped a stay while sailing off Garden Island and lost her rig, a disappointing premature end to her race and perhaps destroying her aspirations for the Siska Trophy – the Offshore championship.

In an exciting start, the Carkeek47 Indian arrived on the course quite late, and paid the price when she elected to start at the port end on port tack. She was put about by Giddy Up, leaving her in irons for several moments, and after recovering, had to perform a very hard bear away to duck under the stern of the double hander, Selkie. It was an unfortunate beginning for a boat which usually sets the standard on the start line and one which may well have influenced the outcome, for she was second by a margin of only 3 minutes and 10 seconds.

An indication of the speed of this year’s race may be a comparison with last year, which was particularly slow. By the time the crew of the last boat to finish had tied up and cracked their first coldie in the Port Geographe bar, the first boat in last year’s race had not yet reached the Bunbury turning mark.

Argo sailed in close company with Giddy Up all the way from start to finish and the rivalry between these two similar sized boats probably helped them get the best from their crews. In the overall IRC result, Argo claimed victory over Craig Carter’s Indian, with Giddy Up just three minutes further back in third place.

The arbitrary YAH handicap for division 1 was won by Brian Todd’s Marten49 Sue Sea, while the Division 2 YAH trophy went to Bryan Thurston and Hamish Maddern’s Sydney36, This Way Up.