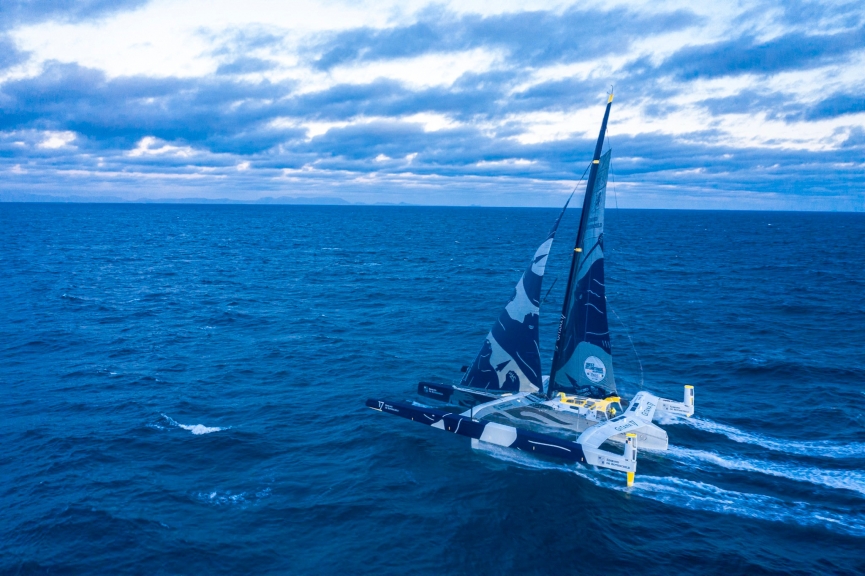 And that makes two! At 19:16 UTC, this Wednesday 20 November, the Maxi Edmond de Rothschild was first around Robben Island, the second course mark in the Brest Atlantiques. In this way, Franck Cammas and Charles Caudrelier consolidate their lead after 15 days 9 hours and 16 minutes of racing.

At the 19:00 UTC position report, the duo on Gitana Team had a 165.6-mile lead over Macif and 189.9 miles over Actual Leader, respectively second and third. Gitana 17 took 6 days and 7 hours to cover the 3,300 miles of what proved to be a testing passage across the South Atlantic between Rio de Janeiro and Cape Town.

A dark night on Robben Island

The second and last official course mark of the Brest Atlantiques is Robben Island, in South Africa. This island, located around 7km to the North of Cape Town and dominated by Table Mountain, is an illustrious passage point. Indeed historically, Robben Island is known for having been the place where Nelson Mandela was imprisoned for over seventeen years.

However, in contrast to Rio de Janeiro, which the Maxi Edmond de Rothschild passed on 14 November at 12:16 UTC, it was under the cover of darkness that Charles Caudrelier and Franck Cammas left the island in their wake. Despite this, Yann Riou, media man on the Maxi Edmond de Rothschild managed to fly his drone for a few minutes before sunset whilst the giant was powered up en route to Cape Town making over 40 knots! The result was some rare and fabulous images, which once again illustrate the reporter’s great talent.

A testing passage across the South Atlantic

Over the 3,300 miles separating Rio de Janeiro and Cape Town, the Brest Atlantiques fleet has not been spared by the weather conditions. Leading the way, the Maxi Edmond de Rothschild is no exception to this rule, quite the contrary in fact. Indeed, like her rivals, the latest Gitana had to hunker down during the first days of this passage across the South Atlantic as she rounded to the North of a powerful low pressure system.

For over 48 hours, normal daily life aboard the giants was shaken about somewhat given how difficult the seas were with the men and of course with the machines! In the second part of the crossing, the maxi-trimaran with five arrows had to dive a long way South, beyond the forty-degree latitudes to round the abnormally low Saint Helena High. This detour was accompanied by a series of gybes along the ice exclusion zone put in place by Race Management, whilst behind them their pursuers were able to set a much more direct course towards Cape Town.

However, in these demanding conditions, Franck Cammas and Charles Caudrelier posted a performance that was very much true to form, getting the very best out of their steed by setting a steady pace which their rivals could but follow. These same adversaries have been somewhat unfortunate in this second section of the course, as is the case for Sodebo Ultim, which collided with a UFO (Unidentified Floating Object) two days ago. Thomas Coville and Jean-Luc Nélias are lamenting the loss of their starboard rudder as well as part of the float following this incident. They’ll be carrying out a pit stop in Cape Town tomorrow morning to carry out further investigations. Team Macif has also just announced a pit stop over the coming hours…

For the men on the Maxi Edmond de Rothschild, there’s no question of hanging around in these latitudes. Indeed, the weather forecasts are obliging them to hit the road for home as quickly as possible, before the Saint Helena High climbs back up to her usual position, namely not far off the island that it is named after.

Message from onboard by Yann Riou:

Since the start of the night, we’ve stopped weaving our way along the ice zone and we’ve set a course for Cape Town, which means northwards. It’s also the first time that we’ve been closing on Brest, with the exception of a few marginal tacks just to be entirely accurate. We’re leaving the forties, which weren’t especially ‘roaring’ this time. To be honest, the setting was quite similar to what you get offshore of Lorient during the same period… with the exception of a few albatross! These famous albatrosses! Talking of which… before we got to Gough Island, Franck said to me:

“We’ll soon start seeing albatross.” Two hours later, at dusk, I spotted one! Now there’s a guy who’s familiar with this neck of the woods… I rush to get my camera. Too late, too late, too dark.

Since then, I’ve been keeping watch. I’m lying in wait for the animal, camera in hand, ready to snap him. I have spotted one or two. But too late, too late, too dark. This morning, we’re officially out of the forties. Busy removing fleece layers, I glance out on deck. This time, he’s not too far away. However, my camera was charging down below, inside the central hull, where it’s too dark. By the time I’d tracked it down, naturally it was too late. I ended up removing my second fleece layer. We’re entering the ridge of high pressure. This evening we’re rounding Robben Island, passing in front of Cape Town and then heading homewards!