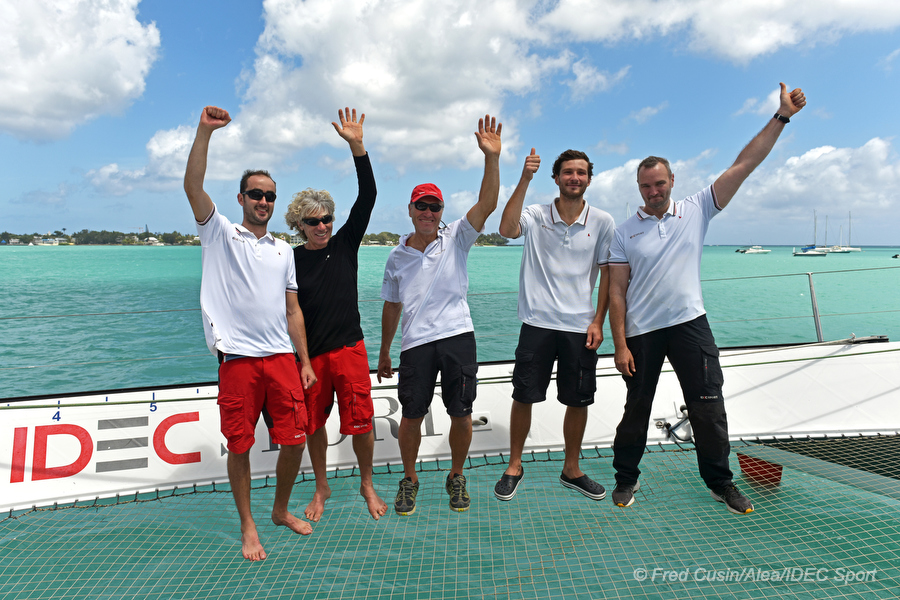 After the Mauritius Route record between Port Louis (Brittany in NW France) and Mauritius that was smashed on 8th November with a time of 18 hours, 14 minutes and 45 seconds, today, Francis Joyon and his crew are tackling the second Act of the IDEC SPORT ASIAN TOUR, which will see them sail from Mauritius to Ho Chi Minh City in Vietnam.

The maxi-trimaran crossed the start line for this new record at 5 hrs, 49mn, 59sc UTC on Thursday 21st November with the aim of setting the first crewed reference time for this route.

Four thousand miles of sailing lie ahead of the bows of the giant IDEC SPORT, as she heads towards Vietnam and its capital Ho Chi Minh City. This will involve crossing the Indian Ocean before passing through the Sunda Strait between Java and Sumatra, passing Indonesia, Malaysia, and entering the China Sea, the Mekong Delta and finishing off Ho Chi Minh City.

Francis Joyon: “This is the second part of our programme, but it is very different starting with the race course. We’ll be heading upwind in the trade winds, but after that we are likely to find ourselves in light airs once into the Sunda Strait. We’ll be passing through an area where sailing boats rarely go.

“I’m pleased that I’ll have a crew with me, as we’re going to have to keep a close watch to get around all the little fishing boats, tree trunks and other dangers that lie in wait. Averaging things out, it should take us sixteen and a half days of sailing to get to Ho Chi Minh City. It’s a great pleasure for me to set off on this adventure towards places our Western racing boats rarely go. It is with a short-handed crew, but they work well together. We are really starting a great adventure through Terra Incognita.”

A short-handed crew of five

There will be a crew of just five people including Francis Joyon. He will be joined by Bertrand Delesne (Boat Captain), Antoine Blouet, Corentin Joyon and his faithful friend, Christophe Houdet. This worked out well when they won the Jules Verne Trophy.

Francis Joyon: “The crew has been chosen because of their complementary skills, the fact that they get on well together and enjoy themselves. There will be five of us aboard for the first two records and then six for the Clipper Route record attempt.”