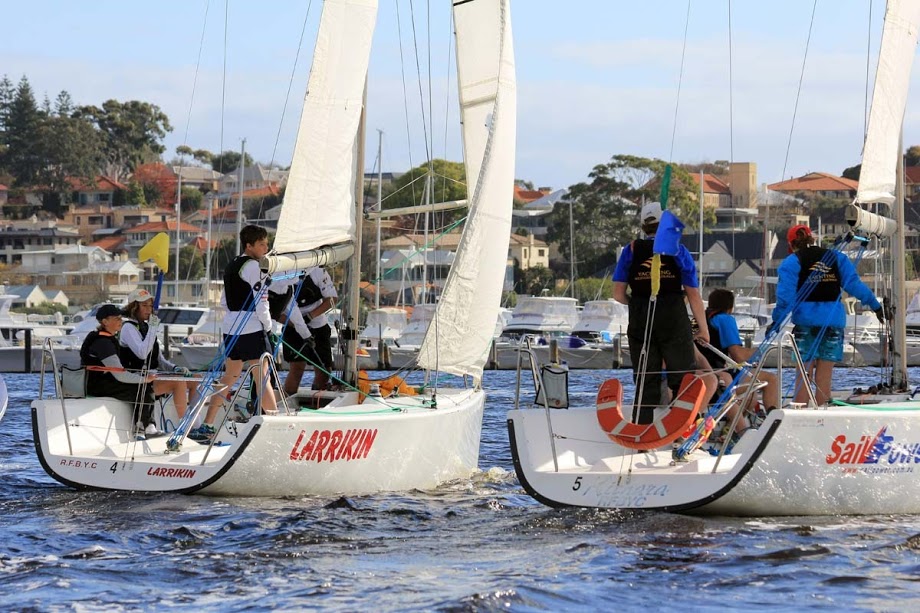 Thirty-three sailors from the RFBYC Sailing Institute Winter Squads made up six teams to compete in BW8 keelboats over the weekend of 2 and 3 September. In moderate winds on Saturday three flights were held. Jet Racing, helmed by Aaron de Longville (15) were unbeaten on Day One with three wins. They were followed by Marcello Torre (15) and Nick Syme (20), both with two. At 20, Nick is one of the older sailors in the Match Racing Squad and he was out to help some of the younger ones. His team made up of 12-15 year olds Jamie Bougher, Joshua O’Dea, Toby Webster, Jameel Willson-Imamdin, Alistair Watters and Zachary Sprunt, the young sailors rotating turns on the boat.

This was the first unassisted match racing regatta for all teams and a challenging first day for the sailors. They soon realised how diligent they must be in gathering information and communicating within their team, without forgetting to keep an eye on their opponent.

Day Two delivered moderate wind and flat water in Freshwater Bay. The race management team set up right in front of the Clubhouse, great viewing for parents and supporters ashore.

A group briefing was held by the coaches who provided feedback from the first day and some valuable advice prior to racing. The RFBYC Sailing Institute sailors are very lucky to have support from a large pool of talented coaches. For the regatta they had Ben Durham; four America’s Cup campaigns and currently competing on the RC44 and TP52 Super Series circuits, Mark Lovelady; many years as an international match racing helm and successful sailor in several keelboat classes and Sam Gilmour; current WMRT Tour card holder and highly successful on the match racing circuit. The coaches followed each match and advised teams between flights, ensuring the sailors were gaining the most from the regatta experience. When not racing, sailors joined their coaches to closely watch their peers racing and listen to the umpire calls.

A full round robin was completed. Jet Racing, skippered by Aaron de Longville with Ben Hutcherson, Nathan Stacey, Caylim Vause and Hugh Kilpatrick led with 4 wins, only beaten by Luke Dobrich’s (15) Harwired Racing team. Second place was split on a count back by Will Drew (14) beating Marcello Torre in their match.

The finals were first to three wins. For 5th and 6th place, Grant Box took the helm with his team Cullen Binet, Thomas Ostergaard, Bailey Ireland and Ben Lane. They sailed against Luke Dobrich and crew, Tom Hodge, Andrew Buchan, Murray Buchan and Kai Colman who won the first three races to keep 5th position. Box’s team certainly made them work hard for it though, coming out in front in most pre-start situations.

It was a tough round for 3rd and 4th between Nick Syme and Marcello Torre. Marcello’s team had been training together throughout the winter and it showed, with his crew of Liam Pabbruwe, Oliver Pabbruwe, Raffael Torre and Bruce McKinnon sailing well to take three wins.

Two young teams lined up to contest the top two places.  Aaron de Longville (15) and Will Drew (14) on the helm. Will’s team had the youngest combined age in the event with his crew Jonathon Everett (14), Brock Pitcher (14), Rohin Kehal (16) and Grayson Downs (14). Two wins to Aaron’s Jet Racing but Will’s Intrepid Racing didn’t give up. They fought back with a win in the third match to stretch out the finals.

With Jet Racing leading 2-1, many close moves and lead changes took place and in a deciding move a luffing incident sent Intrepid Racing into a broach with Jet Racing sailing away to claim the win.

Head coach of the RFBYC Sailing Institute, Ben Durham commented after the event “The level of the sailors was really good for their age and the amount of experience they’ve had. With more time we will see some real talent coming out of this group.  They controlled the boats well and improved a lot with their match racing over the weekend. It’s such a steep learning curve. I was impressed to see that pretty much all of the sailors wanted to keep racing, they had learnt so much they were excited and just wanted to keep going”.

The two day match racing event was well run by a team of volunteers who had been involved in the WMRT Match Cup Australia earlier in the year at RFBYC. The team, led by Race Officer John Taylor were very pleased to see that their efforts for the sport have encouraged the next generation of young match racing talent. RFBYC Sailing Institute sailors are inspired by their older peers with many local Perth sailors currently competing internationally both on the WMRT circuit and in international match racing competition.