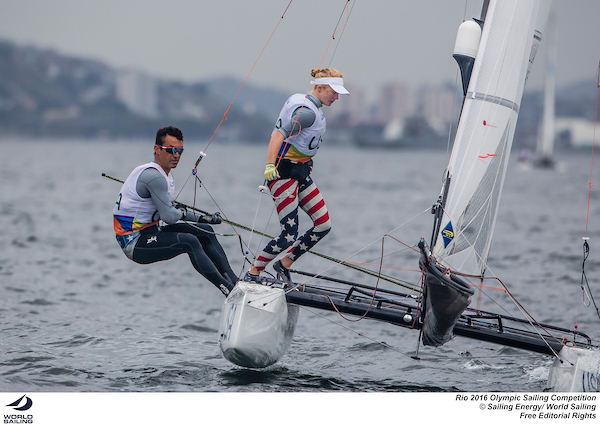 Malcolm Page, chief of Olympic Sailing for the USA, has called for an enquiry into the safety of the new foiling Nacra 17s after a member of his squad, Bora Gulari, lost parts of three fingers in a training accident.

According to an Associated Press report, Page, the Australian who won two Olympic gold medals in the 470 at Beijing and London, said he’s asked the Italian sailing team if he can see a video of the accident, which occurred on Wednesday in high wind off La Grande-Motte, France, while Gulari and crew Helena Scutt of Richland, Washington, were training for the world championships next week. Scutt wasn’t injured.

Gulari told The Associated Press on Thursday that the capsize happened so fast and was so violent that he wasn’t sure if the tips of three fingers were severed because his hand was caught in a line that controls the boom or if they were cut by one of the foils.

A report on an Italian web site said Gulari’s fingers were cut by a foil. Gulari, 41, said he doesn’t want to see the video but wants someone to watch it and tell him what happened “so I can be smarter next time”.

Gulari underwent surgery within an hour of being brought ashore and returned to Detroit on Friday. He said he hopes to get back to sailing as soon as possible and that the accident won’t deter him from competing for a spot on the 2020 US Olympic team.