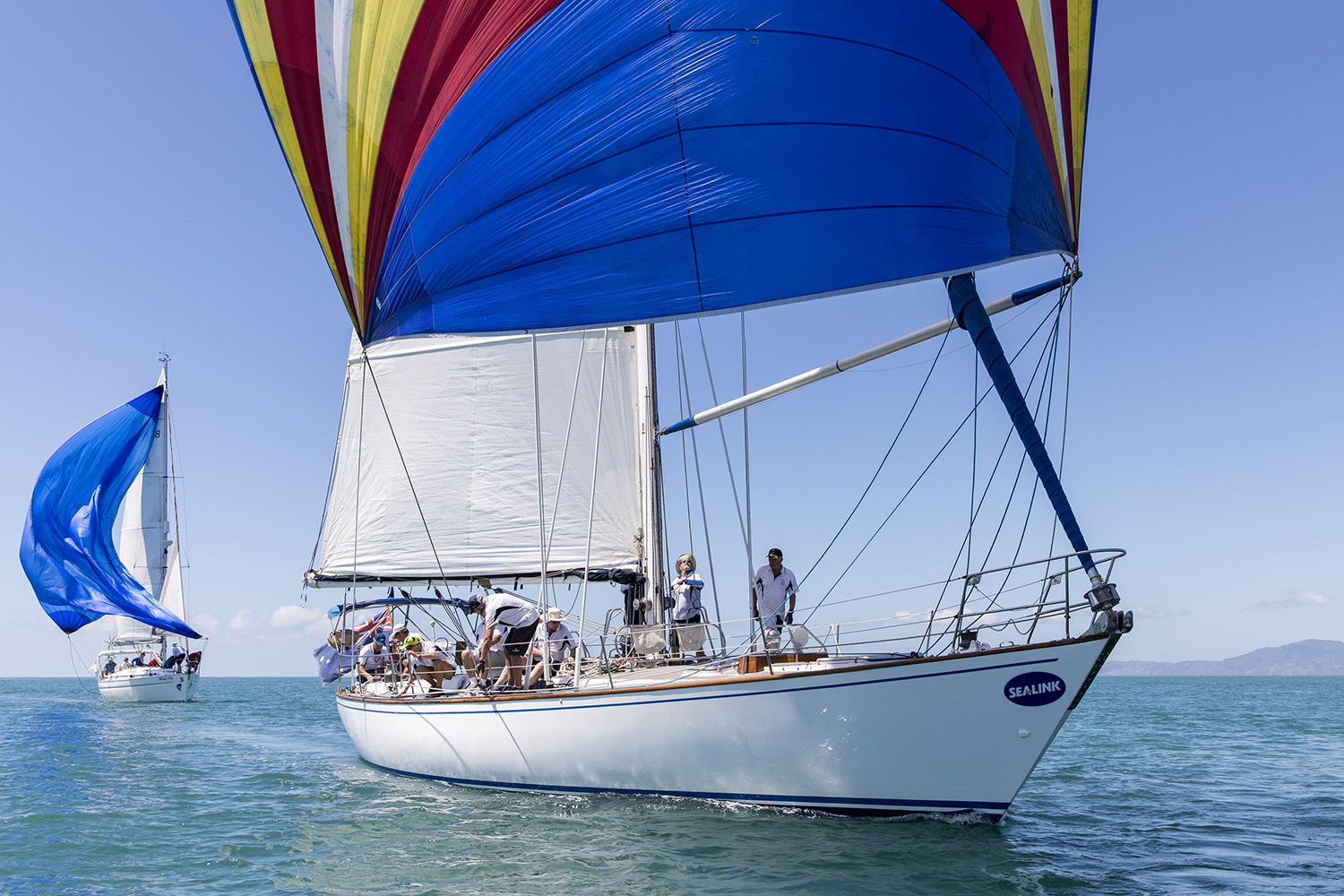 A slow start to the day as Denis Thompson and his on water officials patiently waited for a light breeze to filter through, which it eventually did and Day 3 racing SeaLink Magnetic Island Race Week finally got underway one hour late at 12pm.

It was painfully slow going up the first beat in the Townsville Yacht Club hosted regatta, and in complete contrast to the first two days when the fleet experienced 13 -22 knot winds. Not only that, but the weak easterly changed to a northerly, the breeze fading in and out and becoming patchy and elusive. For some it was diamonds and for others, diamonds turned to stones.

In PHS Division 1, David Currie’s Ponyo and Robert Green’s MBD41, Reignition, started best. Never A Dull Moment, Col and Denise Wilson (NSW), were called back to restart after crossing early, but it was not long before they had overhauled their Lyons 49 sistership, Wine Dark Sea (Peter Lowndes, NSW), leaving them in their wake.

As usual, Adrian Walters’ Little Nico was quick off the start, while astern of the Shaw 11 Metre, the two Farr 40’s, Ponyo and Guilty Pleasures VI (Hughie Lewis/Gary Cripps, Tas) match raced up the beat, but somewhere on the first run, Ponyo left her sistership in her wake.

The light air was perfect for the two Farr 40s’s, Little Nico and for Peter Sorensen and crew on the Thompson 7, Spank.

David Currie spoke of their day: “On the run, Little Nico headed inshore. We knew from experience not to do that. We got a puff and got in front of Nico and Guilty Pleasures with our bigger Code Zero. We gybed and got the first bit of the northerly – those behind us didn’t get it,” he said.

“Near the mark off Townsville, it got lighter and lighter. Nico came down with breeze and caught back the near leg we had taken from them. We saw the multis spearing and boats hitting marks and each other in the next to nothing breeze. We were lucky to get through – it was a very testing day,” the Victorian ended.

Col and Denis Wilson were doing their best to rack up another win to celebrate their tactician and Olympian, Nev Wittey’s 60th birthday today. Wittey, though, was left ashore after falling victim to the dreaded lurgy that has been around these past four weeks. In the end they finished fifth overall. Little Nico leads the division after three races from Wine Dark Sea and sistership Never a Dull Moment.

Division 2 got away surprisingly cleanly considering the bulk of boats piled up at the pin end. Doug Ryan’s Beneteau 44.7, Shazam, and Peter Byford’s Jeanneau 469 L’ Esprit, were away best, just squeezing Vanilla 2, David Perkins’ Dufour 560 out at the pin. Despite this, Vanilla 2 continues to lead the pointscore by two points to Vanilla 1!

Those in Division 3 also got off the line cleanly, then came the Multihull Division. All was well until they were caught in some patchy light air going down the run the first time, with Graeme Etherton and crew on The Boat first to have trouble flying their kite. Etherton was forced to drop down on the course and behind them, Dennis Coleman’s Mistress also struggled.

By the gybe mark, Mistress had overhauled The Boat, while Adrian Lawrie’s Scamper was far enough ahead of the two and did not suffer. However, the gybe mark also provided plenty of overtaking lanes and many took advantage. Ian Johnson’s Salacia won Race 3 to take the series lead from The Boat which is now on equal points with second placed Mistress.

In the Non-Spinnaker Division, the crew of Poppy were exhilarated. “We got the gun,” said South Australian owner Michael Phillips after crossing the line first in their division and winning overall to take the series lead by three points from Nicholas Cable’s Lady Virginia.

“The day went very well for us, thank you! We picked the right side of the start line towards the middle, so got away well. We lost concentration a lot further down the track and coming up to the last mark was most frustrating – the breeze changed and we were almost becalmed, but kept moving slowly. It was hard steering.

“Fortunately, the breeze came back, so we had a nice work back to the finish,” the Adelaide yachtsman said.

David Keyes-Tilley also got the gun today with his beautiful Sky 51 design cruiser/racer Oasis coming home first in PHS Division 3. She finished third overall and is third overall in the pointscore. The Sandringham YC yachtsman said: “We sailed smart today and scored our third from three line honours victory.”

While Keyes-Tilley and most of his crew have raced at SeaLink Magnetic Island Race Week before, it is the first time he’s brought the 37 year-old yacht he has owned for 11 years to this event.

“We are absolutely happy with our performance. As you can see, she is a heavy boat  – 23 tonnes, so she’s better in a big breeze.”

As to whether they are enjoying themselves, crew member and 1984 Olympic crew in the Soling, Dean Gordon, said tongue firmly in cheek: “Hating it. Lousy place. It’s dirty work but someone has to be here. I can’t wait to get back to Melbourne to see if the weather’s more than 7 degrees.”

Keyes-Tilley, a dentist, said they were having a ball. “After this, I will do some cruising around the Whitsundays with my family before going back to work.”

It was a day of drivers having to give it their full attention while crews sat to leeward and had moments enough to take in the beautiful scenery which Magnetic Island has an abundance of.

Racing resumes tomorrow from 11am. More light weather is expected.