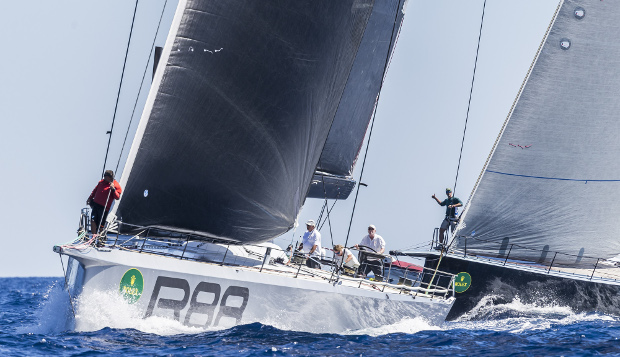 Tricky conditions and dual breezes made life difficult on day two of the Maxi Yacht Rolex Cup in Porto Cervo. This annual event for the world’s largest racing yachts is organised jointly by the Yacht Club Costa Smeralda, this year celebrating its 50th anniversary, and the International Maxi Association, the body sanctioned by World Sailing to represent the Maxi classes.

Today the seven fleets were split, the Maxi 72s and Wallys sailing windward-leewards. After a short delay both were sent off up the course into a light north northeasterly. In the Maxi 72s, Dieter Schön’s Momo reached the top mark first ahead of Bella Mente, but half way down the run, the wind turned through 180°. The race committee swiftly abandoned both races. With the wind failing to materialise subsequently, racing was cancelled for the day for both classes.

Fortunately the news was much better for the Super Maxi, Maxi and Mini Maxi classes. They were sent off on a 25.5 mile anti-clockwise lap of La Maddalena, with the ubiquitous final run down ‘Bomb Alley’. The large boats finished off Porto Cervo, while the three Mini Maxi classes had their course shortened at Isola delle Bisce, the southern end of Bomb Alley. North of La Maddalena crews were experiencing as much as 18-19 knots of wind. “We weren’t expecting to see more than 12 knots,” admitted Nat Ives, tactician on Sir Peter Odgen’s Jethou – today’s big winner, claiming Mini Maxi Racing under IRC corrected time by 16 minutes from Peter Dubens’ Spectre.

On board the all-black Jethou for this event is an all-star cast of former Land Rover BAR crew including Paul ‘CJ’ Campbell-James, Matt Cornwell and Nick Hutton. “It would appear that cat sailors are not bad on monohulls,” quipped Ogden. “As CJ said ‘it is nice to have something to do on board!’”

Ogden is a great fan of the Maxi Yacht Rolex Cup, having come here for years. “Porto Cervo is great. I like the coastal racing, the scenery, the unpredictability of the wind. Today we could have had no wind. And we can all use the YCCS clubhouse – it is a very nice atmosphere.”

Of today’s result, Ogden was delighted: “We had a very good day, against all the odds. We had a fantastic sail up on the outside [of Caprera and La Maddalena], but the last bit was messy.”

The same southeasterly breeze causing the Maxi 72 and Wally abandonments, extended north towards Bomb Alley. While the course for the Mini Maxi classes was shortened before this, the larger classes had to struggle through it. This caused some disgruntlement especially in the Super Maxi class where the new 32.5m Malcolm McKeon-designed Ribelle claimed the Super Maxi class mainly by avoiding a hole which Nilaya and WinWin were stuck in ahead of her.

As WinWin’s tactician Campbell Field described it: “We had a beautiful race until the northwesterly collided with the southeasterly sea breeze which turned the race inside out.”

Like Jethou in the Mini Maxi Racing class, the fastest boats also won under IRC corrected time in the Maxi class. Here George David’s Rambler 88 sped around the course followed by Sir Irvine Laidlaw’s Highland Fling XI, but with a massive gap under IRC of almost 16 minutes between Rambler 88 and Canadian Will Apold’s Southern Wind 96, Sorceress.

In the Rambler 88 afterguard alongside Brad Butterworth is his nemesis from the 2003 and 2007 America’s Cups, Dean Barker, surprisingly sailing his first Maxi Yacht Rolex Cup. Of today’s racing, Barker said: “It was beautiful. The coastal races here are stunning and the breeze way better than expected until the final stretch to the finish, but we managed to wiggle our way through the transition.”

“We managed it well,” said de Froidmont. “There was more wind and it was very competitive racing between us, SuperNikka and the three Swans. The Swans are extremely competitive in this type of breeze.”

Second-placed Roberto Lacorte, owner of SuperNikka added: “We sailed a good race without mistakes, especially upwind for the first part. It was very easy to race at high speed but we know that Wallyño and the Swan 601s perform well in those conditions. We like reaching.”

Winner in Mini Maxi Racing Cruiser 2 was the Vallicelli 80, H20, of perennial Maxi Yacht Rolex Cup competitor and IMA member Riccardo De Michele. Their victory was tightest across all of the class’, by just 11 seconds from Giuseppe Puttini’s Swan 65 Shirlaf.

“We sailed a very good race and the conditions were perfect for our boat,” said De Michele. “We like more wind and flat water. Despite the range between the boats, the competition is very good, the level is very high and you have to do everything perfectly.”

Racing continues tomorrow with a first start at 1130, when more wind is forecast. Following the Wally and Maxi 72 abandonment, the race committee will make up the schedule for these classes on Thursday, the scheduled layday.

The International Maxi Association will be hosting its annual dinner at the Yacht Club Costa Smeralda on Wednesday, 6th September, with its Annual General Meeting on Thursday 7th September in the afternoon.