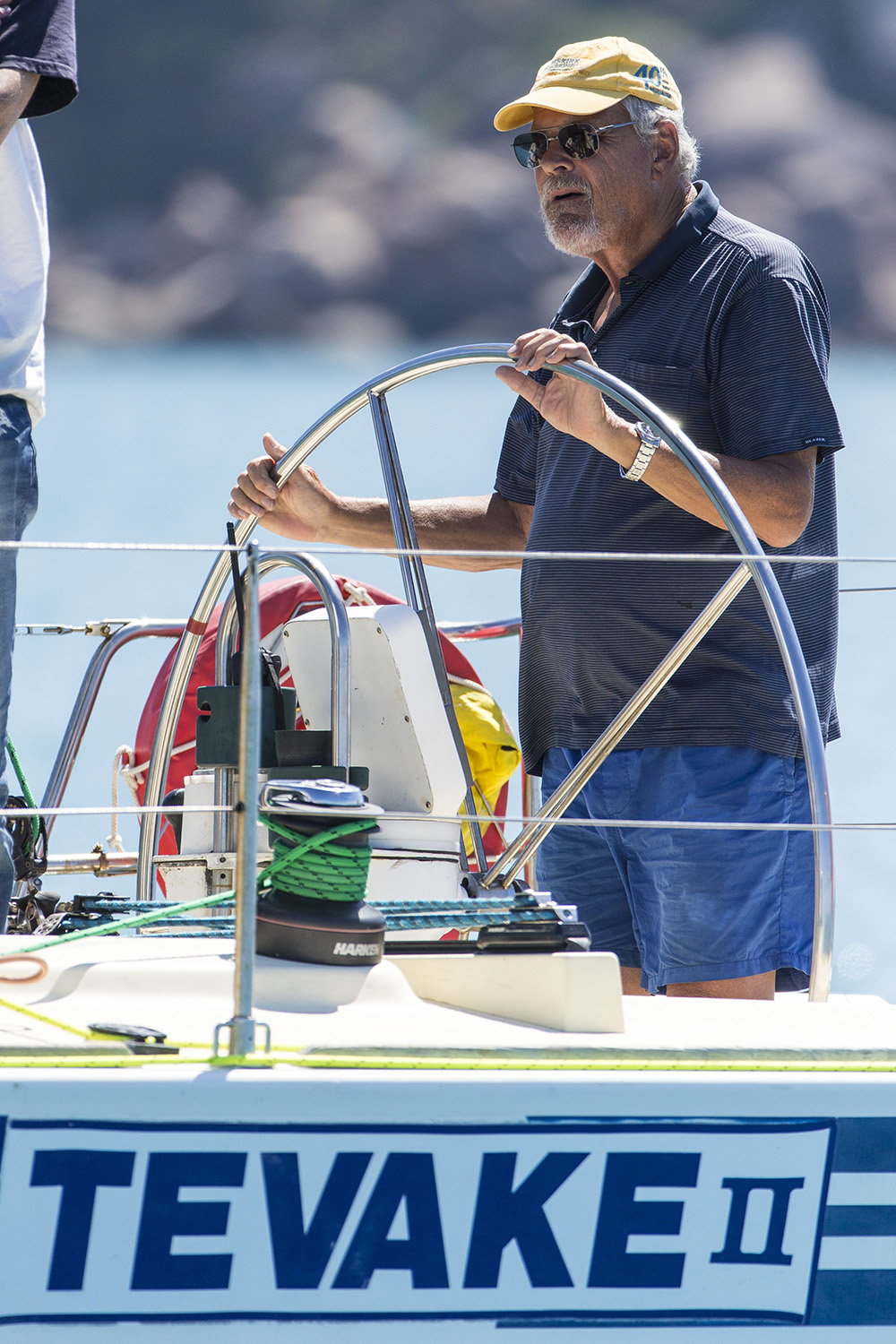 Angus Fletcher at the helm of his Tevake II - Andrea Francolini

Fluttering race flags from every major race and regatta on and from the east coast of Australia makes the 13.6 metre Radford designed Tevake II a standout at Townsville Yacht Club’s SeaLink Magnetic Island Race Week where she is racing for the third time.

An indefatigable Angus Fletcher bought the 2000 launched Tevake II in 2005 from her original Fremantle owner. She replaced his original Tevake (purchased in 1986), named for Basil Tevake, a master Polynesian navigator by whom Fletcher is fascinated.

“She is also named for the Tevake bird,” Fletcher says of the white-tailed-tropicbird found in the Pacific. “I thought it was a nice name for a boat and that if we needed guidance in the Pacific, the spirits might help us.”

The pair has cruised, raced, won and placed up and down the east coast of Australia since commencing Tevake II’s offshore racing career in 2006. They are wonderful ambassadors for the relatively small Hobsons Bay Yacht Club in Victoria.

“My first offshore race with the boat was the Melbourne Hobart. We used and wrecked just about every sail. It’s an interesting time to go into Bass Strait,” Fletcher recalled. “We were fourth over the line behind three 60 footers and unfortunately one boat beat us to the overall win.”

Since that time, Tevake II has become a seasoned campaigner, racing through the Ocean Racing Club of Victoria’s entire program with success. “And for my sins, I became Commodore there for a short time,” he says.

“While competing there, I was looking for a new race to do out of Melbourne. George Shaw and I came up with the Melbourne to Vanuatu Yacht Race,” he says of the leg stretching 1885 nautical mile race which was inaugurated in 2006. He competed that year and again in 2010 when Tevake II took line honours.

Their resume also includes the 2006 Vanuatu to Mackay, six Melbourne to Hobart West Coasters (scoring successive overall wins in the 2012 and 2013), numerous shorter Bass Strait races, along with the 2006, 2010 and 2014 Sydney to Hobarts, with a best result of third in PHS Division 1 in 2014.

“The West Coasters are more difficult than the Sydney Hobart,” Fletcher says.

The two have also competed in the Sydney Gold Coast race, at Airlie Beach Race Week and Magnetic Island in 2014 and again 2016 when they won Cruising Division 1. The Club Marine Brisbane to Keppel is another favourite, “and the only race we’ve retired from. There was little wind and some of the crew had to get back to work,” Fletcher says.

“If I start a race, I intend to finish it. I strongly believe you should finish every race you start. So we have just the one cross against us.”

All the while Fletcher has been plying Tevake II up and down the east coast, he has cruised her to each of these events, thousands upon thousands of miles.

“I never get sick of it; I just like getting out. It’s a perfect escape, getting away from it all. The best thing about racing is when the start gun goes. You have to rely on yourself.”

Although he only came to offshore racing in 1988, Fletcher, who turns 72 “in a month and a half’s time,” says: “I talked my parents into buying me a Gwen 12 when I was 15. My brother and I spent the first season upside down – but it didn’t stop me. I can’t imagine not sailing. Life has been busy…”