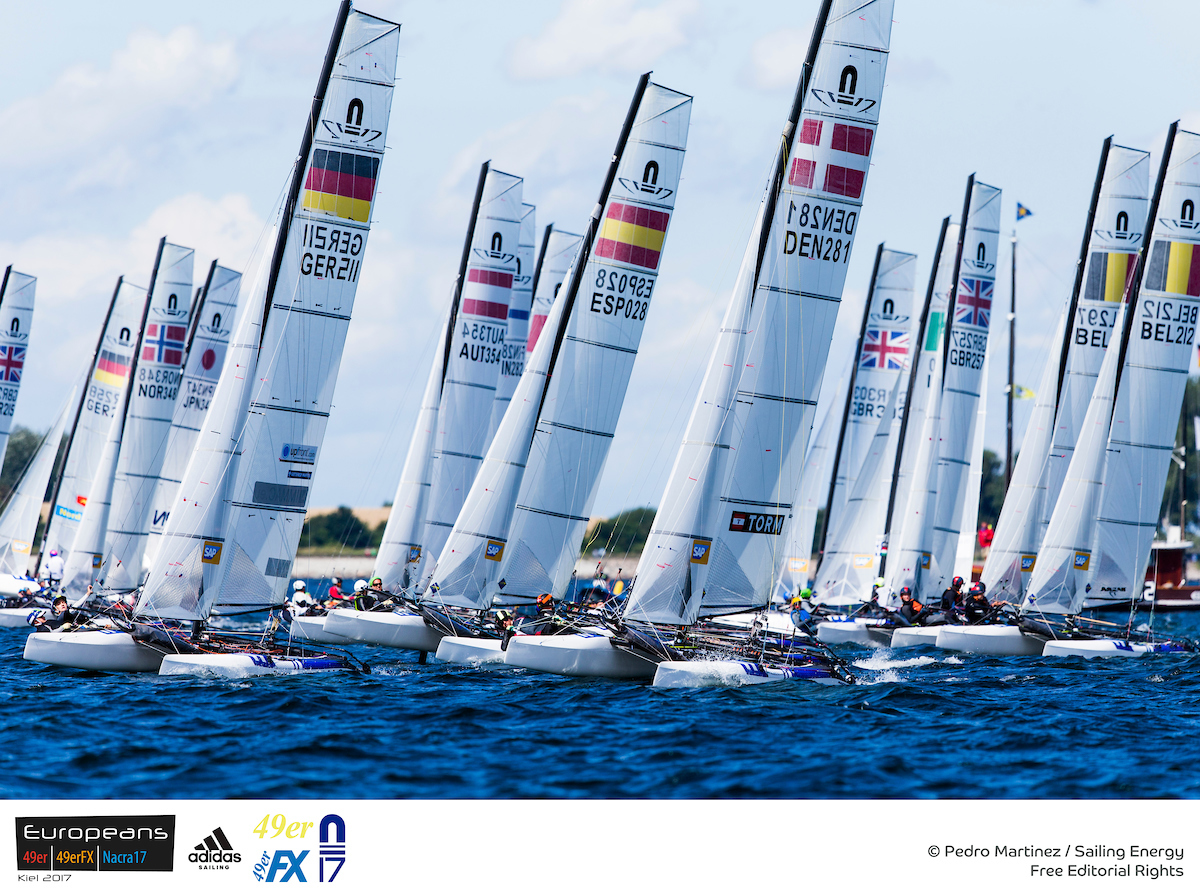 Two Class meetings were held with all members and entrants over the first two nights of the Nacra 17 World Championships, where Class members voted in a series of stabilizing measures.

The open forum meeting agenda was cut short after the allotted time was spent debating a single but very important topic: the use of the gennaker upwind. After two hours of debate, a sailor only vote was held. This vote changed, on a short-term basis for this World Championships only, the Sailing Instructions so as to rule out the use of gennakers upwind. The vote was very tight with both sides having some very valid arguments.

Four weeks ago, New Zealand’s Jones and Saunders initiated the use of gennakers upwind at the Europeans. Some fleet members took the concept forward, while others worked on trying to foil upwind with just the main and jib. While both concepts have had their moments in training, a 9-knot day at the worlds venue where the use of gennakers upwind won the practice racing worried the builders and some of the fleet enough to ask the Class for the practice to be reviewed. To date, sailing upwind with the gennaker has not broken any masts. However a couple of spinnakers have blown up and it is clear that they are not designed for this mode of sailing. After a lot of debate among the Class Executive a last minute vote, though inconvenient, was scheduled.

The following night, on the eve of racing, the Class held its AGM. An update was given to the World Council on topics not covered the previous night during the Open Forum. The Class discussed the future event schedule and other topics relevant to the Class. Three Vice Presidents and the CFO were elected to the Executive. One new VP was elected, Lisa Darminian (AUS), as well as re-elections of Murray Jones (NZL) as CFO, Sofia Bekkatorou (GRE) and Iker Martinez (ESP) as VPs.

Thereafter a series of debates and votes were taken on a number of equipment topics from the use of gennakers upwind, board position, mandatory and optional safety gear and foot loops. Much debate discussed having a period of stability in the Class. While evolution to remain current, and for performance, is desired the crux of the debate centered on the correct balance with a period of stability. Most of the sailors agreed that we should evolve to get the most out of the new boats but they really need as much certainty as possible about the platform over the next few years in the lead up to Tokyo. Ultimately a series of votes on various proposals emphasized stability over broad evolution, but with a focus on looking at low-cost and easy “quick wins” and a priority list of all potential options with full investigation into longer term and more significant changes.

A number of proposals for specification changes to optimize sailing with the gennaker upwind were withdrawn after the debate, with the Technical Committee and designers to investigate in more detail the various options. The Class reviewed its earlier decision to sail with the boards down at all times and ultimately decided to a Class Rule change to have more flexibility and to allow the Race Officers to prescribe times when boards may be raised in lighter airs. This change will allow the Class to test the impact of raising boards and further Class guidance will be developed to guide the Race Officials.

A vote to change the Class Rules to allow an extra foot loop was unanimously approved.

A number of Class Rules votes were conducted concerning safety. For the events in 2017, helmets, safety knives, and impact vests doubling as floatation devices were governed by each event’s Notice of Race. The Class proposed changes to its Class Rules to cement these issues. Of note is the ability for the Race Officials to determine when, in lighter winds, it is safe to race without helmets.

These Class Rule changes will be submitted to World Sailing for approval in the coming days.

In a positive development showing a new level of engagement of the sailors, the Class will meet again, informally, on Saturday, September 9, to review a list of small “quick win” improvements that can be investigated as well as some longer term investigations. The sailors will help set the priority list for Nacra Sailing and the Technical Committee to investigate with the goal of making simple and cost-effective improvements to keep improving the performance of the Nacra 17. An example of such improvements may be to allow a 3:1 traveller system, filling the screw holes in the rudder elevator and to look at the rudder gudgeons to see if we can reduce drag, weight and play in the system.