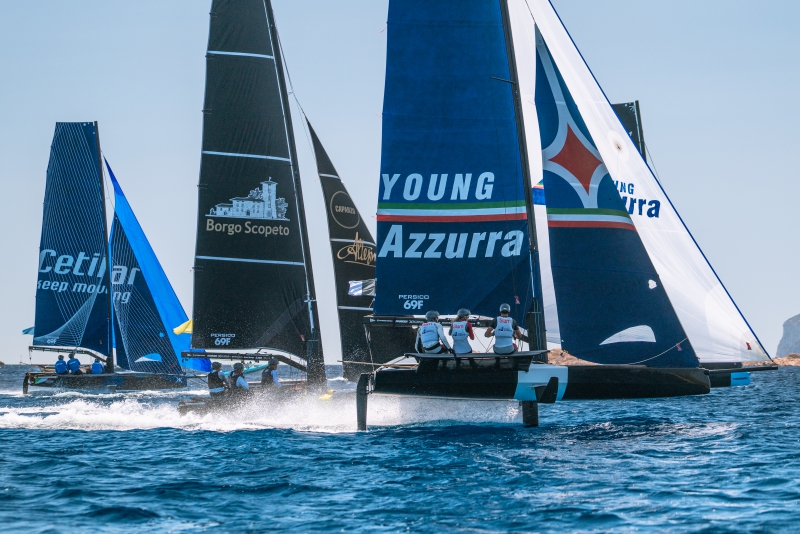 Under the guidance of the Nacra 17 Olympic coach Gabriele Bruni, the Young Azzurra team are looking to take risks on the race course at the upcoming Youth Foiling Gold Cup event. Pic - YCCS/Marcello Chiodino

The Italian team, Young Azzurra is set to begin racing today in the second event of the Youth Foiling Gold Cup at Lake Garda.

The Youth Foiling Gold Cup was established as an alternative to the Youth America’s Cup, which was cancelled in 2020 due to the pandemic, and sees the participation of mixed under-25 teams from all over the world competing on Persico 69F boats.

The first leg, where Young Azzurra claimed second place, was held in March in Gaeta. The YCCS team composed of skipper Ettore Botticini, flight controller Federico Colaninno and the two mainsail trimmers who alternate on board, Francesca Bergamo and Erica Ratti, have already completed a week of training in Limone prior to today’s start.

The Gold Cup Young Azzurra team have had the opportunity to perfect the finer details on board under the guidance of coach Gabriele Bruni, himself fresh from victory in Tokyo Olympics as trainer of the Italian Nacra 17 team.

Bruni said, “We have developed some new schemes and we are preparing in the best way possible. It will be a long regatta that includes qualifying and final stages. I’ve asked the team not to be afraid to experiment with some new things during qualifying to see if they work. You always have to try to improve.”

The programme for the Youth Foiling Gold Cup will see the teams complete the qualifying round on August 20, when the top-placed team will go directly to the final and the second will be able to skip the first round of knockouts. Then from August 21 to 23 there will be two knockout rounds before the final takes place from August 24 to 26.

In this event, Young Azzurra will once again come up against Dutch Sail Team, the current leaders of the series. Ten crews in total will do battle on Lake Garda, representing six nationalities including France, Holland, Italy, Switzerland, the United Kingdom and the United States.

Commodore of the Yacht Club Costa Smeralda, Michael Illbruck said, “This second leg of the Youth Foiling Gold Cup is an opportunity for Young Azzurra to consolidate everything the team has learned in recent months. “But above all it represents the opportunity to gain a better awareness of the level of performance achieved, through comparison with other very experienced teams. Fair winds!”