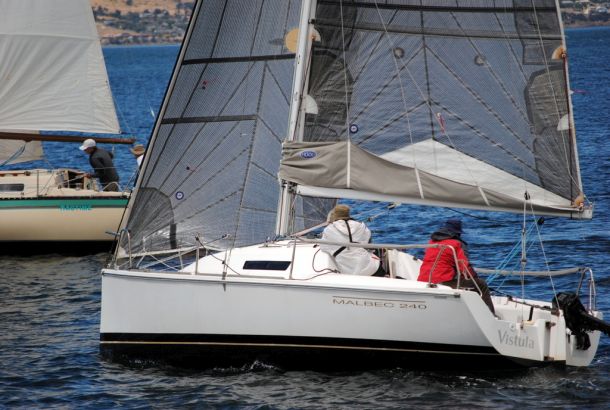 Young Lion, Steve Chau and Scott Brain’s Young 88, emphasised her dominance of Division 2 in the Royal Yacht Club of Tasmania/The Good Guys Winter Series on the Derwent today, scoring her third win out of four races.

The last race win gave Young Lion a comfortable overall victory, with a third place on corrected time in the only other race. The 2015 Series was reduced to four races with a winter gale causing one day to be cancelled.

Spring came and went on the final day, with the sailors having the best of steady 10 -11 knot north to north-easterly breezes and a sunny morning before the weather deteriorated and freshened.

The turn-out for the final race was most disappointing for the RYCT, with six starters in Division 2 (there is no Division 1 in the Winter Series) and just three on the start line for Division 3. Nevertheless, the outcome of Division 3 went right to the wire with just seconds deciding the final race and the overall winner, Gregory Biskup’s Malbec 25 Vistula.

Just 53 seconds separated the three starts at the finish of the 62 minute race and on corrected time, the Mottle 33 Kindred Spirit, skippered by Alastair Douglas, took first place, beating Vistula by 21 seconds.

The final pointscore was Vistula 10 points, Kindred Spirit 11 and Ingenue 18.

Had Ingenue managed to beat Vistula for second place on corrected time today, with Kindred Spirit still first, that would have resulted in a countback between Vistula and Kindred Spirit.

The countback would have favoured the Mottle 33 with a Series scorecard of 5-3-2-1 as against Vistula’s score of 2-2-4-3. Those seconds lost or won today proved the key to victory.