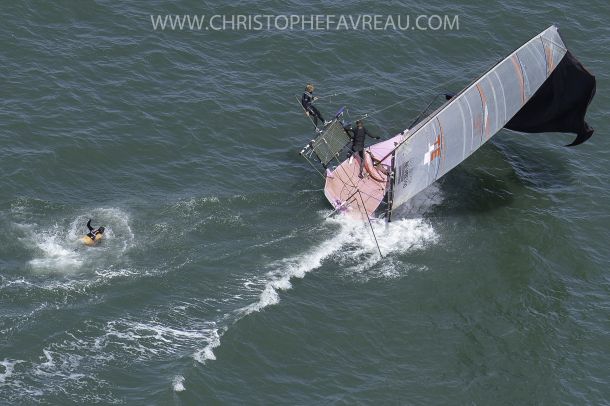 After seven races spread out over four days time, including the Ronstan Bridge to Bridge the evening before, Friday broke with the promise of superb conditions to wrap up this 2015 edition of the International 18ft Regatta hosted by the St Francis Yacht Club. Eleven boats were present, including the solitary Aussie entry, Keegan York's Compass Markets boat, which had suffered mast step damage on Tuesday, and looked for all intents and purposes done for the regatta.

With a deep, early season  low pressure system rotating off the coast of Oregon, the isobars were stacked tightly over Northern California, and by dawn's light, the Pacific was looking anything but pacified. On San Francisco Bay, the early signs of brisk conditions gave the fleet of 18s optimism that the regatta would end with a bang instead of the fizzle at the bottom of the course the previous evening.

The noon first start was sailed in the high teens on the course, with a fast flood throughout race track, there was little incentive to head to the beach for relief. The WNW offshore presented a more reliable and consistent breeze than the fleet saw the prior Tuesday. The tight battle between David McDiarmid's Yamaha and Alex Valling's C-Tech would continue where it left off on Tuesday, with Yamaha taking another bullet in race 8, with C-Tech nipping at her heels around the course. Fresh off repairs to the forestay attachment and mast forestay strut, Hamlin's Harken was back in form, and feeling great after a Bridge to Bridge class win the night before. In the mix and crossing paths with the leaders in the first race of the day, Team Harken would finish third in the first race of the day and take the bullet in the second.

Winds would exceed 20 -25 for the second race and the top of the track began to show some counter current as well as building swell filtering in from offshore, where a full-on maelstrom was building  and building. Conditions became more spirited in the second race with capsizes and close calls a plenty, mixed in with several spectator boats getting in the action along with a couple of the local tourist boats cutting across the course added to the color. Will Tiller's Aon  would join Glen Sowry's Event Clothing and Daniel Roberts' Notorious P.I.G. on the disabled list. Alex Valling's C-tech also would end up back on  the beach, having suffered  some jib sheet problems, but managing to limp around the course with enough chutzpa to hang onto a third.

By the third race, pressure had increased to the high 20's and low 30's, with established rollers streaming through the top of the course. The six remaining boats would find themselves sailing extremely cautiously, but even so, conditions were getting on the edge of out of control, and the simple task of bearing away at the weather mark became an adventure. We witnessed two completely submarined boats as the bows dug in and the boats followed suit.

As Graham Catley mentioned the night before, “To finish first, first you have to finish”… Graham and crew on Maersk would join JV Gilmour and crew on Skiff Sailing's PINK in the physically unable to finish category in  the final race of the regatta.

There would be but four boats to complete the final race, number 10 of the week, if you are counting,  one Kiwi boat ( Yamaha), one Aussie boat ( Compass Markets)  and two American  entries (Harken and White Lightning). David Mcdiarmid's Yamaha would finish the regatta on a high note with yet another bullet and overall victory with a mere 11 points. Alex Valling's four-man crew sat out the final race yet netted a second place overall with 16 points and Hamlin and crew would  ride into final day with a 3-1-2 flourish to take thirrd overall. Not bad for having to swallow two dnc's and a dnf on day 2!

All in all a glorious finish to yet another superb year for the 18's on San Francisco Bay.  The Kiwi's have become a powerhouse in the San Francisco event and despite most of them sailing much heavier and outdated rigs with battered sails, the American crews have shown themselves legit contenders, proud, unwavering and non relenting. It's great theater!

Now if we can just get the Aussie's to bring a few more teams next year, we would have something extra special!