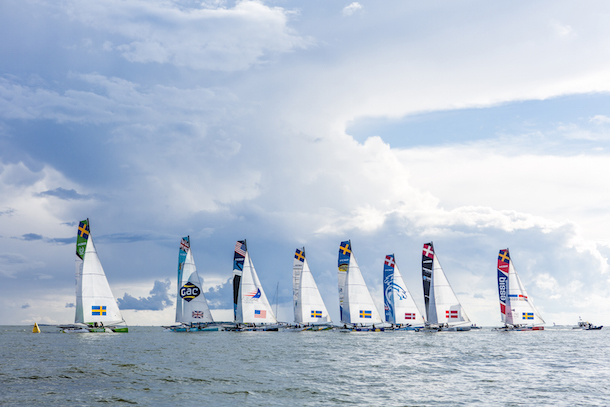 Saturday’s wind conditions challenged the nerves of the M32 sailors, organisers and the eager crowds on the Hernesaari shores. After the opening race the wind dropped to zero and did not return until just before the cut off time for the day. After an entertaining show race, only a reaching sprint from the start line to the finish, the wind decided to allow a second proper race of the day.

Team US One came out on top this Saturday. Having scored a first and a third, skipper Taylor Canfield and his crew took the overall lead in the Battle of Helsinki, further strengthening their lead in the whole series. “We managed to keep our focus and that paid off today. We are happy to lead the battle of Helsinki going in to the last day tomorrow”, says Canfield.

The Hydra Sailing Team had a really good day and ended up in runner up position. The team work between the Danish skipper Michael Hestbaek and Finland’s Thomas Johanson produced a fourth and a second bringing them a few steps closer to the top in the weekend’s total score. The battle for second in the closing race gave the audience a lot of joy as the Nordic combination beat Team Us One by only a few meters.

The Battle of Helsinki will be decided on Sunday and the first race is scheduled to start at 2 pm.