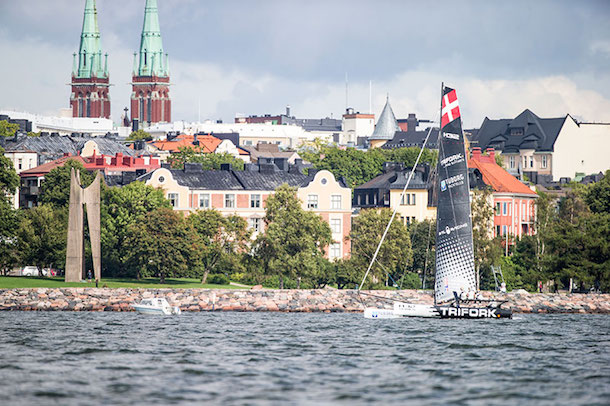 Trifork Racing from Denmark with the beautiful city of Helsinki in the background. Photo M32 Media.

The Hernesaari racecourse in Helsinki was in a better shape this Friday. With a steady breeze from southwest and under a pleasant sun the conditions were close to perfect.

Thursday’s winner Alite Racing skippered by Martin Strandberg had to live with a fifth position after today’s close racing. Friday’s winner were finally Team US One, the overall leader of the Scandinavian Series before Helsinki. Taylor Canfield (26) of US Virgin Islands took two bullets and avoided any bigger mistakes.

Another young skipper, Sweden’s Nicklas Dackhammar (25) at the helm of Essiq Racing Team and the experienced Rahm Racing Team under command of Mattias Rahm, also from Sweden, finished on equal points in second place today. Rahm Racing is now the new over all leader in Helsinki. “We are waiting for the bullets, but are very happy with our over all performance”, says Rahm.

Finland’s Thomas Johanson navigated the Nordic Hydra Sailing Team into a third place in the second race, but the team’s pace was still not good enough to squeeze into the top battle.

Trifork and Wallén Racing collided at the last mark rounding in race four. Trifork had to carry two penalty points into its score and Hans Wallén’s day ended with a damaged boat.

After a breath taking experience in the hot seat on board Rahm Racing Team, Finnish Olympic bronze medallist in London 2012, Mikaela Wulff, could not hide her excitement: “Let’s get the Rio 2016 project out of the way and then more of this”, she says.