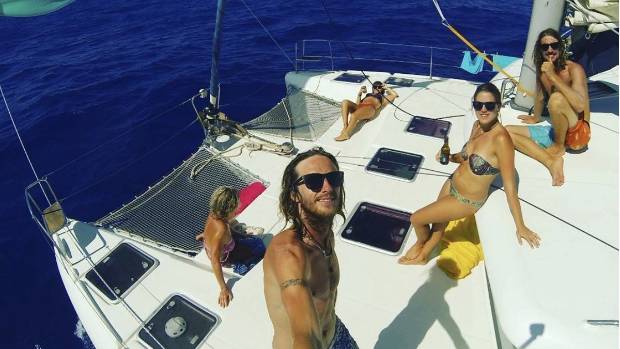 In the middle of the Atlantic. Photo Abby Stanford.

When Kiwi couple Abby Sanford and Rohan Honson-Morris took their yacht out for the first time ahead of their planned Atlantic crossing, they didn't even know how to turn on the engines.

The pair had been so captivated by the sight of a catamaran “surfing the most perfect wave” in Fiji the previous year that they'd made it their 2017 New Year's resolution to buy their own yacht and embark on an epic voyage.

“It took me about eight months to come around to the idea,” Abby, 25, says. “This is the type of thing people dream about but never take the plunge because it is terrifying. But after a few months we ended up having no reasons not to give it a try.”

The couple had absolutely zero sailing experience when Rohan, 28, bought a small Hobie Cat to start practicing on after their return from Fiji.

The 2007 Lagoon 420 Catamaran they purchased shortly afterward, using funds from the sale of their house, was the first sailing yacht either of them had ever set foot on.

But that didn't stop them setting themselves the challenge of sailing from the Mediterranean to the archipelago of Cape Verde off the northwest coast of Africa ahead of crossing the Atlantic to the British Virgin Islands in the Caribbean – a distance of 5700 nautical miles.

Growing up in small beachside communities north of Christchurch (Abby is from Pines Beach and Rohan from Woodend Beach), the couple say they developed a thirst for adventure that will probably never be quenched. Perhaps partly because they both spend so much time in salt water.

“There is something about the sea that has always grabbed my attention,” Abby says. “The wildlife, surfing, getting smashed by the waves and having the salt and sand on your skin. There is nothing I enjoy more in life than being out in the pure water.”

Read the full story about their European cruising experiences here.