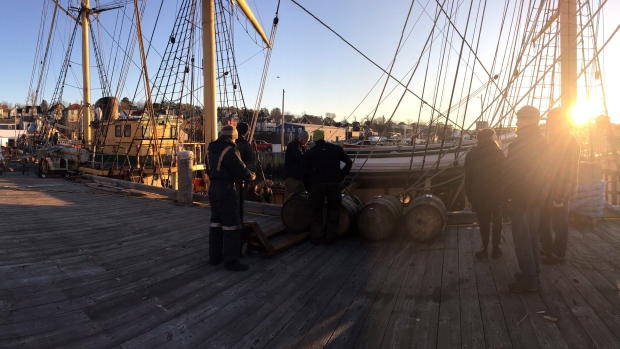 Barrels of rum from Ironworks Distillery rest before being loaded on a tall ship in this undated handout photo. (THE CANADIAN PRESS/HO

LUNENBURG, N.S. – A Nova Scotia distillery is sending its spirits on an around-the-world trip on a tall ship, promising it will taste better for the journey.

Four barrels of rum from Lunenburg's Ironworks Distillery will spend the next 15 months in the cargo hold of the three-masted tall ship Picton Castle.

The Lunenburg-based ship is best known for its adventurous sail training voyages, and “this will be their seventh and last complete around-the-world circle,” said Ironworks co-owner Lynne MacKay.

They decided to mark its final around-the-world trip with rum that will be bottled upon return in May 2019 as 'Round the World Rum.

The tall ship had been scheduled to set sail out of Lunenburg on Monday, but the sailing was postponed until Tuesday or Wednesday.

MacKay said Captain Daniel Moreland is keeping the rum secure in the hold, under lock and key.

“Everybody's making jokes – 'You're sending rum barrels to sea and your expect them to come back whole, that's a joke!' But they're pretty well secured. We sent it out under the auspices of Excise Canada and all of those customs things so that what goes out will come back, and we have faith that it will,” she said.