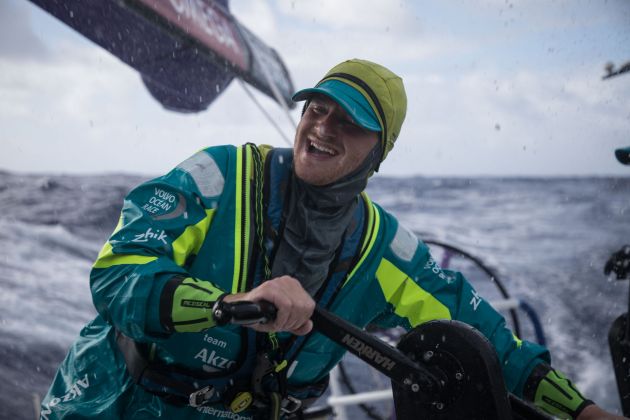 With the Volvo Ocean Race fleet racing south in trade wind conditions, team AkzoNobel is leading the charge towards the doldrums, still some 600 miles away.

The fleet is becoming more aligned from north to south, with less east/west leverage than 24 hours ago.

Scallywag, still furthest west, is making a concerted effort to get to the east with the rest of the fleet, narrowing their exposure by about 20 miles. But it’s come at a cost of more than 20 miles on the leaderboard. The Scallywags remain in second place however, behind the leading AkzoNobel who are sailing fast and on a favourable angle south.

“We are a few miles ahead of the guys behind us and we have Scallywag to leeward,” said AkzoNobel’s Nicolai Sehested. “It’s a tricky position as we don’t know how it will play out with Scallywag.”

“Boatspeed is crucial. A little bit of luck, you need that as well… Buy we’re in a strong position right now because we’ve been fast the last few days. We’ve locked the boat into a good mode. I can’t say what we’ve been doing but we’ve been fast and we’re feeling comfortable.”

“Hopefully our speed gets us first to the doldrums. And if first in means first out that would be really, really good for us.”

MAPFRE, locked into a battle with Dongfeng, are match racing their closest opposition on the overall race leaderboard as they head towards the doldrums.

“We’ve currently got Dongfeng about a mile and half to windward, and bow-even… it’s a pretty tight battle. Not much in it at all,” said MAPFRE’s Blair Tuke.

“AkzoNobel and Scallywag are ahead and to leeward of us. AkzoNobel has gone quite well on all the skeds, but we’ve managed to come back on Scallywag a little bit. Hopefully this next transition works in our favour and we can catch them up like they got us in the last one.”

For Dongfeng skipper Charles Caudrelier, the intensity is nothing new. But he still took time to make a Valentine’s Day phone call to his mates on MAPFRE.

“Since 24 hours the maximum distance between us and MAPFRE has been about 500 meters, less than on our last excellent inshore race in China,” he noted.

“I tried to call them earlier but they were probably not in good mood just after we had passed them this morning and I had no answer.

“Now all the fleet is running in the same direction and looking for the best passage through this terrible doldrums ahead of us and we use this time to have a rest after the first tough days.”

Rest won’t be on the cards for long. The doldrums will be in play by the weekend.