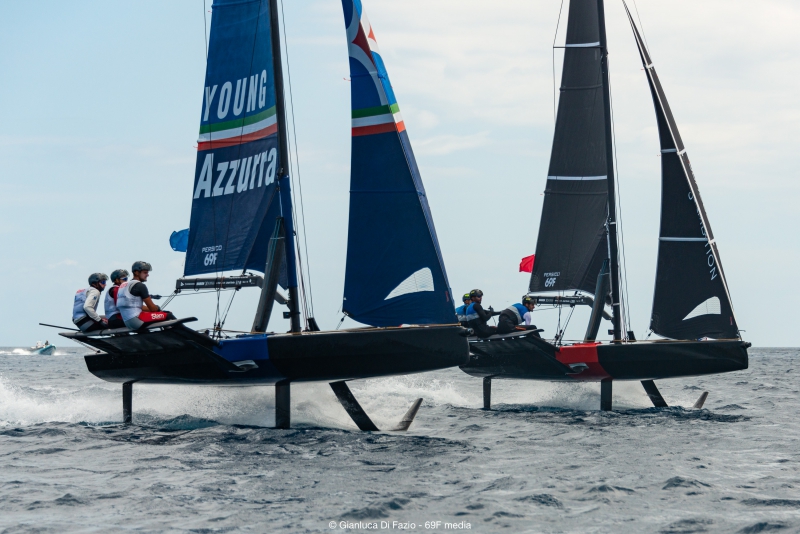 Groupe My Ambition finished in second place and Sailing Performance in third overall in the event organised by the Yacht Club Costa Smeralda together with the team 69F.

On this conclusive day, racing started at approximately 10.30am in winds of 14 to 17 knots. Four more races were completed, bringing the total number of races held over the three days to 12.

The Young Azzurra team kept their performances consistent, always finishing at the top of the fleet. Today’s results – two third places, a second and a first – secured a clear victory in the Grand Prix 2.2 of the Persico 69F Cup circuit.

There was no shortage of battles on the water, and in the penultimate race of the day, there was a spectacular duel between Young Azzurra and Group My Ambition on the approach to the finish. The home team crossed the line first by just a few seconds.

Ettore Botticini, skipper of Young Azzurra: “Winning both the legs of the Grand Prix 2 in Porto Cervo was not a given; we raced well, and we placed well even when things weren’t going the right way.

“We’re very happy with the work we’ve done over these two weeks, with waves and wind of over 20 knots. The boat was easily getting to 30 knots and managing the physical effort of the guys on board was complex. But we did it, and we feel ready for the second leg of the Youth Foiling Gold Cup in August in Limone, Lake Garda.”

Romain d’Ortolì, from Groupe My Ambition said, “We’re really happy with this result. Coming second after just a few days of training is fantastic. We are confident on board, even in extreme conditions. The key to racing well is flying the boat for as long as possible, navigating simply and avoiding penalties.”

Michael Illbruck, Yacht Club Costa Smeralda Commodore said, “We’re obviously very happy with the result Young Azzurra has achieved and just as happy with these two weeks of foiling; the first time a foiling event has been held in the Costa Smeralda.

“Sailing on these boats in certain weather and wave conditions is challenging. Racing on these waters has been a great training opportunity and provided excellent competition for all the participants. My thanks go to the 69FTeam, the crews, our team and staff, and we hope to see the Persico 69F boats on our waters again soon.”

The next sporting event for the YCCS is the Coppa Europa Smeralda 888, scheduled from 23 to 25 July.