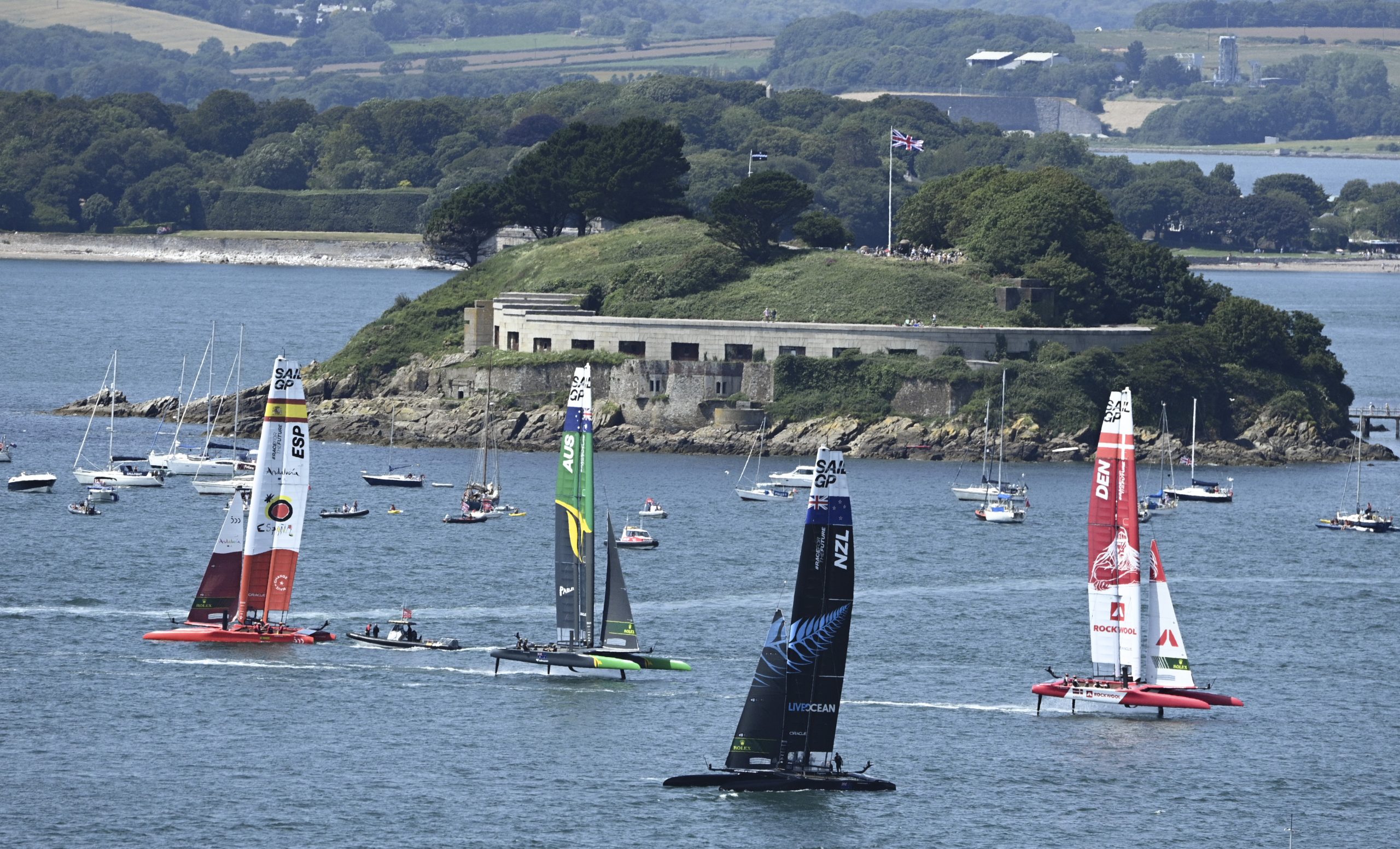 Spectacular racing and scenery at The Hoe in Plymouth - SailGP pic

Record numbers of fans turned out to watch the world’s most exciting racing on water from The Hoe in Plymouth, on what was the perfect British summer day, both on and off the water.

As the temperature soared on-land, Phil Robertson turned up the heat on the racecourse by eliciting the first SailGP black flag of the championship, ultimately disqualifying the Spain SaiIGP team from the final race.

Tom Slingsby’s Australia SailGP Team opened in style winning the first two fleet races, before Jimmy Spithill’s U.S. team claimed victory in race three, to place them at the top of the leaderboard, just ahead of Billy Besson’s French team who were the most consistent team of the day with three third places.

Although lighter winds were in the forecast, the decision was made before racing to utilize the traditional five crew onboard set-up. The Aussies who struggled with the three-up configuration in similar wind conditions in Taranto, Italy, made the most of the conditions to impress on Plymouth Sound with on-water gusts reaching nearly 20 km/h.

Australia’s early dominance began from the start of the event, winning the first race of the day by a clear margin and repeating the feat in the second race of the day. Slingsby and crew finished 37 seconds ahead of Nicolai Sehested’s Denmark SailGP Team presented by Rockwool, who scored their best result of the championship so far.

Slingsby said: “We’ve started well but there’s a long way to go. We’re sailing well, getting good starts, sailing with confidence, and showing if we get out in front, we’re hard to pull back.

“It’s no secret that light air is our biggest weakness – and it’s my weakness – but we’ve been working on it. The last event in Taranto was a bit embarrassing for our team. I felt bad for not doing the team justice, so we’ve worked on our light air and it’s working so far.”

Slingsby and his team appeared to take a breather in Race 3 – finishing seventh – and the race became a much tighter affair.

SailGP’s first ever black flag – meaning an instant disqualification – was given to Spain due to a risky starting maneuver causing high risk of collision or capsize to the U.S. team, but Spithill took it in his stride to guide his team to victory.

Spain SailGP Team driver Phil Robertson said: “Our start tactics were to come in fast and find a gap. From my side, I felt we nailed the timing on the start and then we heard that we had an infringement. It was close but we didn’t infringe. Perhaps it was marginal, but I don’t think it should have been a disqualification. We didn’t do anything wrong.”

Reactions to the repeat offense by Robertson and the Spanish team were strong. Sentiments from the likes of Spithill and Slingsby showed favor to the umpire’s decision.

“When MotoGP or F1 have a similar situation; they start fining or penalizing the driver, so perhaps this needs to be considered. There is a fine line between pushing and risking hurting people. For any other team perhaps, it might be a harsh call, but because it’s not the first time, it was absolutely the right call.”

Supporting the severe penalty call, Slingsby said: “The penalty in my mind should have been harsher as he keeps doing it. He is relying on the other boat to react and if Jimmy hadn’t reacted there would have been a huge crash and someone could have been injured.”

Adding to the drama of the day, local fans in Plymouth were met with a disappointing opening day for their home team, who ended the opening day of the Great Britain Sail Grand Prix in last place on the leaderboard.

While securing a second place in the final race of the day, Paul Goodison, interim driver of the British team, totalled just eight points across three races, after incurring a contact penalty in Race 2.

“On the plus side, the atmosphere and the crowds on The Hoe were fantastic to see. We were bitterly disappointed but even when we came off the boat there were fans clapping us up the dock and that has helped us pick our heads up and put a smile on our faces. A reminder that it is good to be British.”

The United States ended the day topping the event leaderboard with France and Australia tied for points sitting in second and third position respectively, while Italy Sail Grand Prix winners, Japan, disappointed to finish seventh – just a single point above the Brits.

Denmark, New Zealand and Spain complete the table in fourth, fifth and sixth respectively at the end of the day.

The Great Britain Sail Grand Prix will continue on Sunday, July 18 with two final fleet races followed by a podium race, with the top three boats in the ultimate showdown to decide the winner.

This event is sold out – except for spectators who can get afloat. Fans unable to attend, can watch the broadcast live in 175 territories, including via SKY Sports in the UK and Ireland as well as live on YouTube.