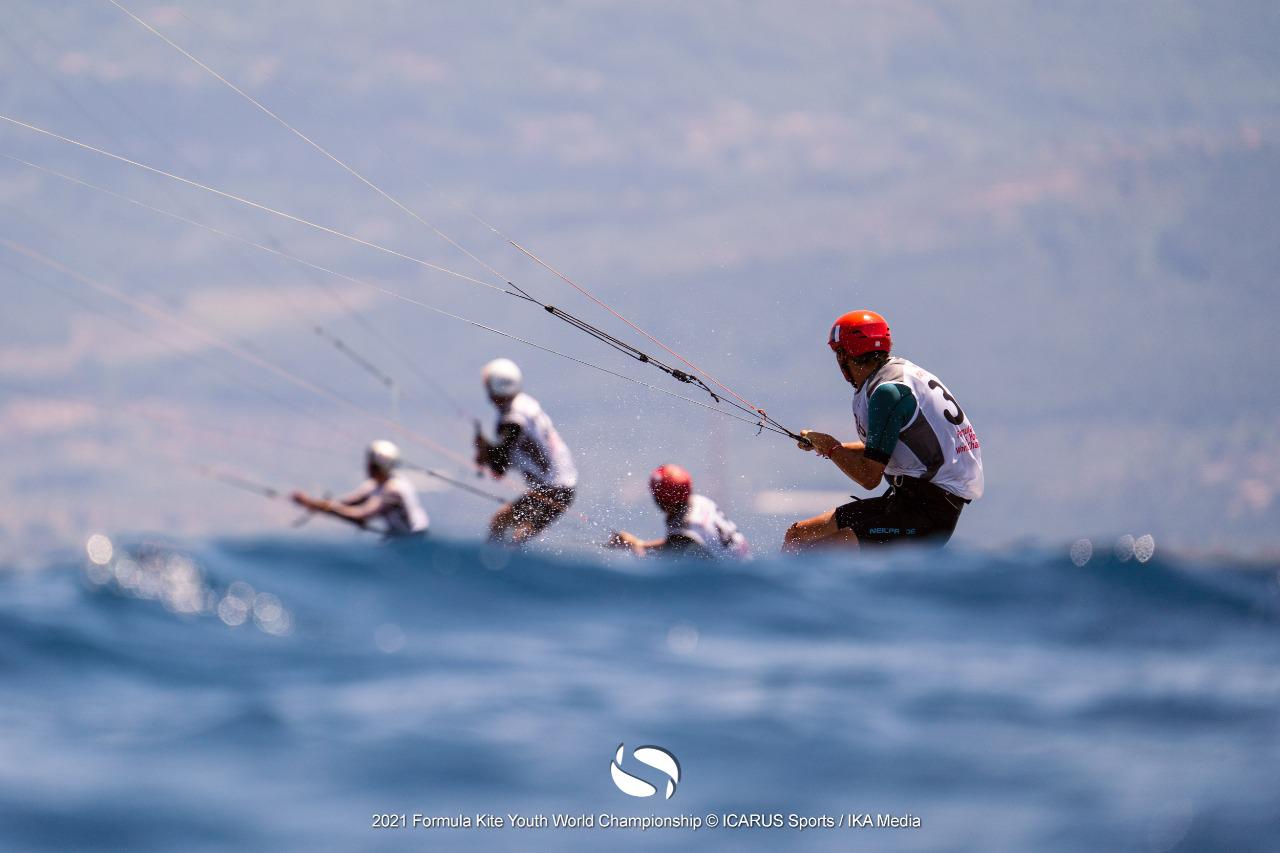 Sixty-five young competitors had their hopes high at Hang Loose Beach on the penultimate day of the 2021 Formula Kite U10 and A’s Youth Foil World Championship, as only the top 14 will make the Medal Series tomorrow.

A cloudy and almost windless morning in Gizzeria. Everyone was looking up, hoping for the wind to blow, as so many positions were at stake.

The clouds were gone by noon, thanks to a light breeze, and the three fleets headed to the water for what turned out to become another day of great sailing conditions.

It was not only crucial to end the day in the top 14, but those who finished first and second are headed directly to the Finals and will have respectively two and one match points on the scoreboard.

Winners of the two semi finals will join tonight’s first two in the all-deciding four-rider Final. The first competitor to get to three points will be crowned World Champion.

The Medal Series is only reserved to fleets with more than 20 competitors, and as a result, the 17 Formula Kite women will just keep going with three more races tomorrow.

Today, the Women kicked the day off in an 8-9 knots breeze that increased to 15 knots throughout the day. After four races, the top three spots were confirmed: Nina Arcisz (POL) was third, Magdalena Woyciechowska (POL) second and Julia Damasiewicz (POL) defended the lead with yet another four bullets.

“I had a great day; we had my favourite conditions. Super fun with lots of tight races and I am pretty happy,” Damasiewicz said.

“The match with Magdalena is going all right, but she is very good. I was happy to add four more bullets in the scoreboard. Tomorrow is the last day of this regatta and I hope we’ll be able to sail,” she said.

In the Formula Kite Men, after a scary DNC in the first race due to equipment failure, Maximilian Maeder (SGP) goes into tomorrow’s Medal Series as the number one with two match points in his bag. Riccardo Pianosi (ITA) was second.

In the A’s Youth Foil,Jan Koszowski (POL) and Mikhail Novikov (RUS) go straight to the Finals with two and one match points respectively.

The forecast for tomorrow doesn’t look promising, but with a target time of six minutes for the Medal Series, the Race Committee will do its best to complete the long and challenging 2021 Youth World Championships.