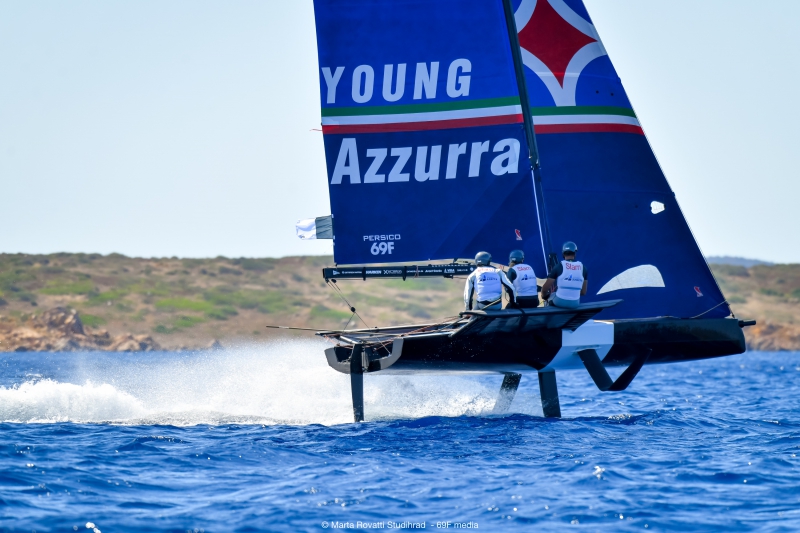 Porto Cervo: Today was the final day of racing at the first event in the foiling Persico 69F and the home team, Young Azzurra, won the Grand Prix 2.1, followed by the Swiss team Okalys Youth Project and the Italian team, FlyingNikka 74.

The third and final day of racing at the Cup, organised by the YCCS together with Team 69F, was very intense for all of the teams who, to recover the races that were postponed yesterday, started the day early at 7:00am with a briefing before heading out on the water.

Evaluating conditions, the Race Committee set the course off Romazzino, where the Persico 69F fleet completed eight races in a Mistral breeze of 15 to 18 knots.

From the first race, the YCCS home team were determined to make up for the complicated first day of racing in which they finished fifth overall. In today’s first race, after getting a less than perfect start, Young Azzurra began gaining ground and finished it in second place.

In the second and third races, the locals fired off two bullets, leaving the rest of the fleet more than a leg behind. In the following races, Young Azzurra scored a fourth, two more bullets and a pair of second places.

With placements like these, Young Azzurra dominated the scoreboard and won the Grand Prix 2.1, adding this victory to the one already captured at the circuit’s first event in Malcesine.

The Swiss team, Okalys Youth Project, started the day in first place overall, but finished second overall after scoring a trio each of fifth and third places, a second and fourth.

It was a very good day for FlyingNikka 74. The crew pushed their way up to third place overall thanks to a bullet, three second places, a fourth, two fifths and a sixth. The final score is calculated on the basis of points overall plus electronic points and added points for fair play.

Michael Illbruck, Commodore of the YCCS, said: “Today, the final day of racing and this first foiling boat event, was fantastic! The Race Committee did an excellent job, and all of the participating teams had a chance to prove themselves and measure up their adversaries in the Costa Smeralda waters.

“I want to congratulate team Young Azzurra for their result and especially for bouncing back, they gave it their all and had fun too.”

Ettore Botticini, skipper of Young Azzurra, responded: “We’re glad that we got eight races in today. We were sailing in a sheltered area, which is very tricky, because there were wind holes and gusts.

“The team sailed really well, and we managed to win the majority of today’s races. We rounded the final mark ahead of the entire fleet. We couldn’t feel better and are charged up and ready for next week’s event.”

David Biedermann from the Swiss team Okalys Youth Project commented: “The Race Committee did a great job today and found us a spot with lighter air that was a bit shifty. It was interesting to sail in these conditions.

“When we headed out this morning, we were in the lead, at the end of the event we’re in second place, it’s a good result for us. Young Azzurra deserved their win.”

On Monday, the practice sessions for the Persico 69F fleet will commence ahead of the Grand Prix 2.2 event in the Persico 69F Cup, which will be held at the YCCS from July 15 to 17.

There will be three days to win this event and Young Azzurra will be sailing against eight other teams: Okalys Youth Project, Sailing Performance and Tixwave/Timeon that they sailed against in this event and five new teams: Groupe My Ambition, Section 16, Balthasar, Swiss Dental Solutions and GoatPower by Ulika.