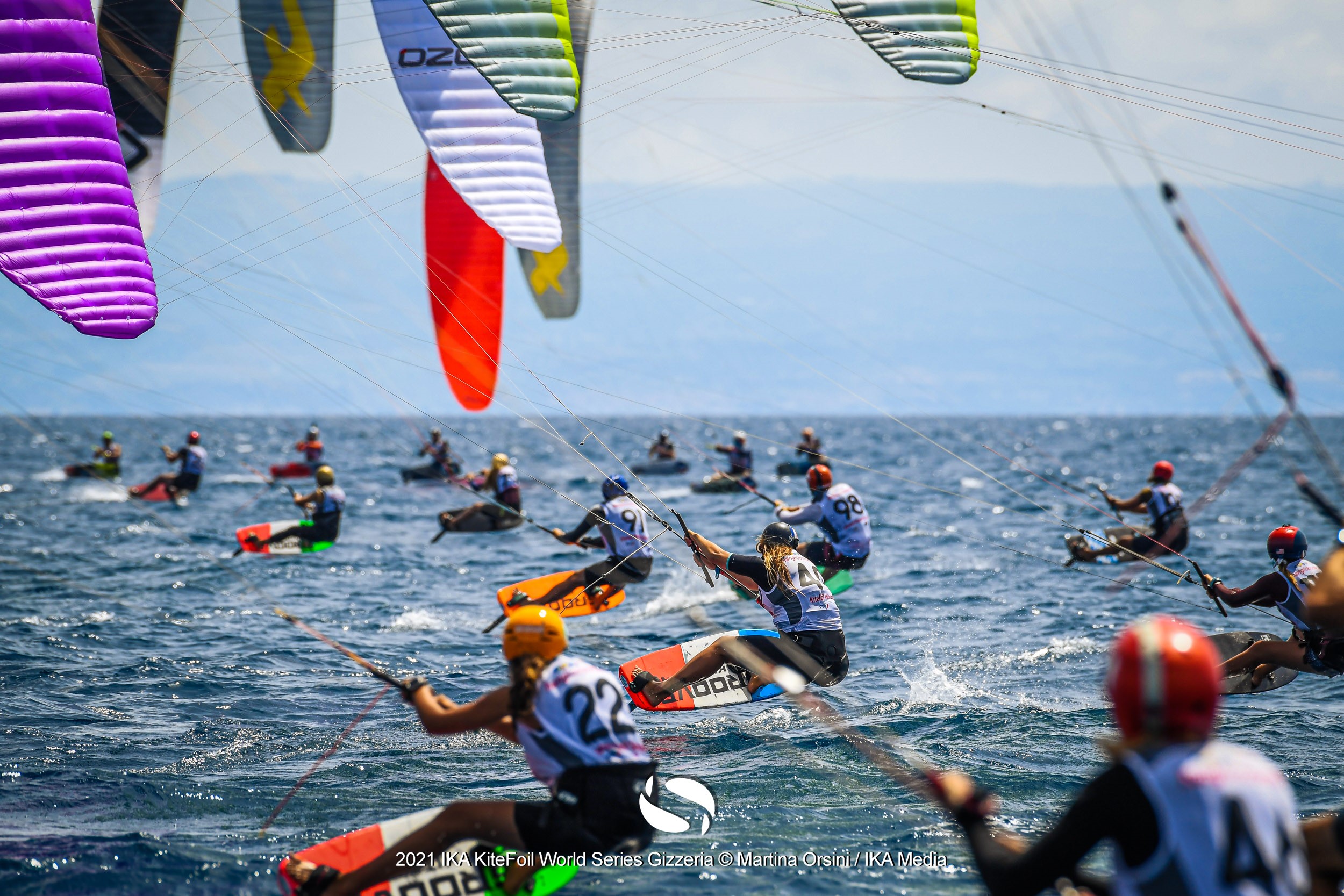 A perfect day of sun, wind and kitefoiling at Hang Loose Beach in Gizzeria, Italy for the last five races of the qualification series, with Russia’s Denis Taradin coming out on top at the end of the day.

One hundred competitors took to the water in two fleets as scheduled, alternating for the different races. A steady 15 knots breeze pushed the kites all afternoon on the flat waters off Gizzeria Lido, and apart from a few tangles here and there, everyone had fun flying over the racecourse.

First to hit the water were yesterday’s 50 riders from the blue fleet, who had to re-sail the race cancelled last night due to dying wind.

Connor Bainbridge (GBR) won the re-sail and kept his lead from yesterday, but it was only temporary. The day was going to unfold with five more races for both fleets.

Bainbridge scored another bullet, two fourths, a 20th and a 10th, using his worst as a discard. Nonetheless it dropped him down to third overall. Axel Mazella (FRA), moved up a place to second, after scoring a bullet and four seconds in a row. These scores, however, did not make him best of the day.

Denis Taradin’s four bullets and a second skyrocket him to the provisional leading spot.

“It was so unexpected, I have never won so many races back-to-back until today,” the Russian racer said.

“It feels surreal and nice. I am just excited that this is happening for the first time. The plan from now on is to stay out of trouble, race clean with no crashes, and just be as consistent as possible. We’ll see where I get.”

Toni Vodisek (SLO) closed the day in fourth place, making a strong comeback with three wins today. He is the defending winner of the 2019 edition of the KiteFoil World Series Gizzeria, and on top of that, runner-up from the 2019 European Championship. He also holds a Youth Olympics silver medal from Buenos Aires in 2018.

The Slovenian has been slowed down by a shoulder injury from last year but has already proven he is back.

“I can’t really say I’m 100 percent after the injury because I haven’t had the chance to train so much because of my shoulder, other than doing the medical exercises to fully recover. I hope to be able to kite much more this year,” Vodisek said.

“Yesterday I’ve made some mistakes and little ones today too, so the plan for tomorrow is race clean and have fun.”

The fastest girl is still Daniela Moroz (USA) in 26th overall in the Open competition. She was fastest in the lighter wind yesterday, as expected. Poema Newland (FRA) is not too far behind, in 32nd, closely followed by Ellie Aldridge (GBR) in 34th.

“It was better for me today; I think I’ve been more consistent,” Aldridge said. “We’ve had more stable and stronger wind which was nice, and we got so many races in.

“After these events, I am training for the Europeans and the Worlds. A win there would be amazing, but the main goal is for me to stay in the top group and get better.”

Tomorrow the sailors will be divided into Gold and Silver fleets, with the top 50 fighting to win the first of a five-event season. The first start is scheduled for 12pm and the goal is to get five races in for each group.