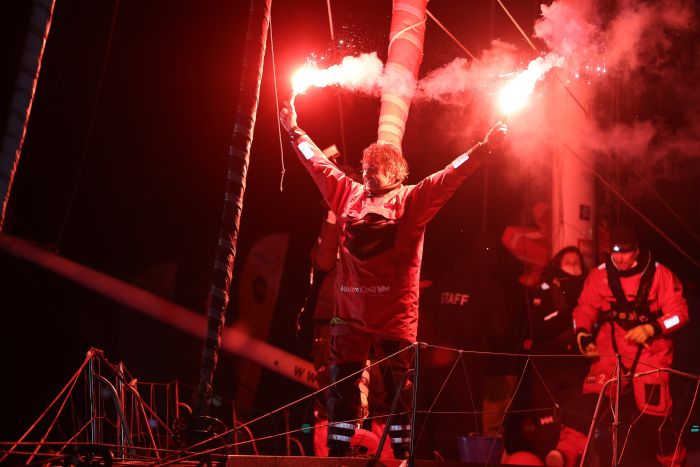 Yannick Bestaven, the 48-year-old French skipper of Maître Coq IV, is the overall winner of the ninth edition of the Vendée Globe.

Although he actually took the gun for third place off Les Sables d’Olonne, France at  03hrs 19mins 46 secs early this Thursday morning, because he carried a time compensation of 10 hours and 15 minutes, awarded by an international jury for his role in the search and rescue of fellow competitor Kevin Escoffier, Bestaven takes victory 2hrs 31mins 01secs ahead of Charlie Dalin and 6hrs 40mins 26secs of Louis Burton who both finished ahead of him and take second and third respectively.

The skipper of Maître CoQ IV was one of the two skippers who led the fleet for the longest time: 26 days, or 32% of the time an excellent result for the skipper who grew up in Arcachon and has Yves Parlier as his mentor.

Bestaven finished in Biscay drizzle on a two metre swell in 20 knots of westerly wind before being warmly welcomed back to Les Sables d’Olonne’s channel where well wishers lined their balconies and streets to acclaim the new winner of the Vendée Globe.

Although he was not tipped among the fancied, possible winners of the race, Bestaven revealed himself as an outstanding performer on his first time in the southern oceans where he was at his best in the Indian Ocean, passing Australia’s Cape Leeuwin in third place and then in the Pacific, emerging first at Cape Horn with a 15 hour lead.

After then building the biggest margin of the race, 440 hard-earned miles thanks to a smart climb up the South Atlantic, Bestaven must have thought his chances of winning this Vendée Globe were over, when during three frustrating days all but becalmed south of Rio, he saw his margin evaporate like snow in the hot Brazilian sun.

But the skipper from La Rochelle on the west coast of France, an engineer as well as professional skipper, proved his race winning credentials as he fought back into contention by the Azores. His final, key move proved to be choosing to head north on the Bay of Biscay which allowed him to arrive on the heels of a low pressure system and accelerate faster on a long, direct track into Les Sables d’Olonne over the last 24 hours, chasing Dalin and Burton across the line to hold his time to win outright.

Over an ocean racing career spanning nearly 20 year Bestaven has tasted success in the Mini class – winning the Mini Transat in 2001 – and then in Class 40 where he twice won the Transat Jacques Vabre. But, after he was one of the first to be forced out of the epic 2008 Vendée Globe when he was dismasted on the Bay of Biscay less than 24 hours into the race, he has taken his time to return to the Vendée Globe with a well appointed programme which saw him put together a small, hand picked team of specialists from all fields including the America’s Cup. He is also a successful entrepreneur who owns and runs Watt & Sea, a company which develops hydrogenerators fitted to most of the competing IMOCAs.

Although, in the 2015 VPLP-Verdier designed Maitre Coq IV which was built as Safran, his boat is not one of the latest generation foilers, he was able to maintain high average speeds in the south and remained competitive in more moderate conditions.

The ninth edition of the race saw a record entry of 33 skippers and has been marked by complicated weather patterns for both the descent down and the ascent back up the South Atlantic, including regrouping of the leading pack in persistent period of light winds early in the Pacific, and again off Rio de Janeiro, Brazil.

Difficult, short, crossed sea conditions in the Indian Ocean meant the newest, most powerful latest generation foilers could not sail to their full speed potential. And two of them, Thomas Ruyant’s LinkedOut and Charlie Dalin’s Apivia both suffered different damage to their foil systems which compromised their speed potential on starboard tack.

The most dramatic moments of the race came on the 22nd day of racing, November 30th when PRB, the IMOCA of third placed Kevin Escoffier broke up suddenly 640 miles SW of Cape Town.

Escoffier was forced to abandon into his liferaft in minutes. Four skippers were requested to reroute help locate and rescue Escoffier. Although 61 year old veteran Jean Le Cam was first on the scene and got close to Escoffier it was 11 ½ hours later when Le Cam was finally able to rescue the stricken skipper from his liferaft.

The international jury announced their time compensations on December 16th at six hours for Germany’s Boris Herrmann, 10hrs and 15 mins for Bestaven and 16hrs and 15 mins for Le Cam. Little then did race watchers realise that this redress would ultimately decide the final winner after the closest, most competitive race finish in history, the first three skippers crossing the line in less than eight hours.

Germany’s Boris Herrman was in contention for a podium position until he struck a fishing boat at 90 miles from the finish line. He is bringing his Seaexplorer-Yacht Club de Monaco to the finish at reduced speed.

He led the fleet for long stretches of the race, topping the leaderboard 157 times and proving virtually unbeatable in the south. It’s a marked contrast to his first attempt at the Vendee Globe, which ended with dismasting only hours after the start. After that experience he didn’t return to the race for more than a decade.

Perhaps bearing memories of his premature abandonment in the 2008-9 race, when he was one of the first forced out, he routed cautiously in the big weather of the early stages of this Vendée Globe and his performance didn’t shine until the fleet had almost reached the Roaring Forties. But then two perfectly timed gybes then lifted him into the top five behind Dalin, Ruyant, Escoffier and Le Cam.

Bestaven’s early progress in the south was interrupted by a heart-stopping night on November 30 supporting the search, along with Jean Le Cam, Sébastien Simon and Boris Herrmann, for Kevin Escoffier’s liferaft after PRB broke up and sank within a few minutes.

When he got back in the race, Maître CoQ IV was more than 400 miles behind the leader, Apivia, The subsequent award of 10 hours 15 minutes redress by the International Jury  to Bestaven kept the race open until the final hours of the race.

Bestaven, with his 2015 boat and its more modest sized foils, proved especially able to push his boat hard in the confused seas and big winds of the Indian Ocean and pulled away from the peloton, closing on leaders Charlie Dalin and Thomas Ruyant, before then breaking away into the lead south west of Tasmania on December 16. He then emerged out of a high pressure system which effected a remarkable restart in the Pacifc just after Christmas to celebrate his 48th birthday with a growing lead, which he had extended to nearly 15 hours over Charlie Dalin at Cape Horn. .

But from there he was impressive in the South Atlantic, putting a 434 mile lead on Dalin and Ruyant. But this didn’t last. His progress was cruelly blocked by the semi permanent cold front that sits off Brazil’s Cabo Frio, by Rio. Over three frustrating days his lead evaporated. And the evening of Day 65 saw an unprecedented restart after almost 20,000 miles of racing. With the top five boats now less than 30 miles apart, and four more within a further 80 miles, the race was wide open again.

After losing his lead it was back in the North Atlantic that Bestaven revealed he had in fact suffered damage as he was rounding Cape Horn in the most difficult conditions of his race, 50kts winds and big seas. His pulpit was ripped off, he lost a furler and some of his sails could no longer be used.

Maitre Coq lV was the westernmost boat among the leaders at this stage and the advantage passed to those further offshore immediately to the east – Apivia, Bureau Vallée 2 and LinkedOut. This trio, accompanied by Boris Herrmann’s Seaexplorer – Yacht Club de Monaco, were later the first to break out of the doldrums, thus extending their advantage over Bestaven.

Nevertheless, Bestaven continued to press hard and made the big call to route north of the major islands in the Azores archipelago. This traded extra distance for potential for more speed in the stronger winds associated with a massive low pressure system forecast to replace a weak high pressure ridge in the Bay of Biscay in the final few hours of the race.

This strategy not only returned him to overall contention at the heart of thrilling finale that left the overall result hanging in the balance, even after the first three boats had crossed the finish line of Les Sables d’Olonne.

Podium of the ninth Vendée Globe