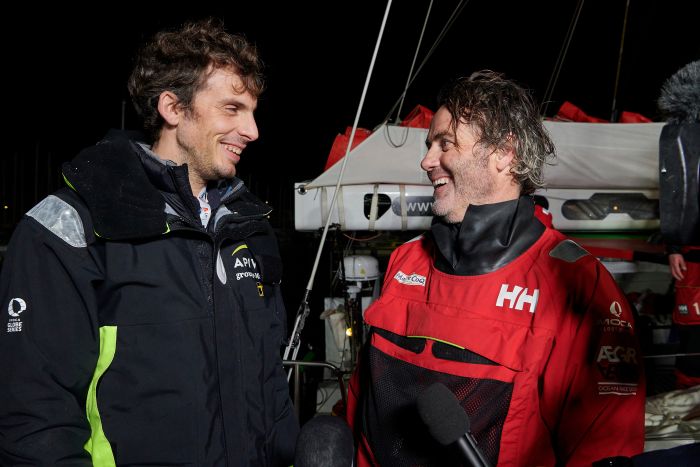 “There are two winners in this Vendée Globe,” smiled Yannick Bestaven sportingly as he warmly greeted Charlie Dalin, the French skipper who hours earlier had broken the finish line of the solo round the world race in first place.

Granted a 10 hrs 15 mins time allowance for his role in the search and rescue of Kevin Escoffier, Bestaven displaced the pre-race favourite Dalin to win the Vendée Globe by 2hrs 31secs, the narrowest margin ever in the history of the race, earned by the oldest ever winner.

“I am happy to have finished the race in the lead. The English talk about “Line Honours’ and I am happy with that,” Dalin, 36, said in his press conference. “What I’m going to remember is that I was first over the line – no one can take it away from me. It’s normal for boats that stop to help others to have time compensation and that’s out of my control. But whatever the outcome I’m here in front of you now and I’m happy that I’ve done a good job.”

To another man, among the top skippers, there was neither a gripe nor a groan about the time allowances made by the international jury.

“For me the matter is closed and I won’t be talking about it again. A human life was saved. End of story,” said Louis Burton who slipped from second across the finish to third.

And one of the most heartwarming exchanges was on the gangway to the ponton d’honneur when Escoffier greeted and thanked Bestaven. The two sailors embraced for 30 seconds, the unspoken message being that roles might as easily have been reversed.

But, recalling the time he spent searching for Escoffier in the dark of night 650 miles south of Cape Town, Bestaven recalled, “It was a nightmare, standing on the deck all night looking for someone. I really thought we might not find him.”

Germany’s Boris Herrmann, who was involved in the search too and was allocated six hours, still managed to bring Seaexplorer-Yacht Club de Monaco across the finish line despite damage to his boat sustained from a cruel collision with a fishing boat. The incident happened at 1926hrs CET Wednesday night while Herrmann was 90 miles from the finish and on course for a podium place.

When he reached the finish line in fifth place, his starboard foil slightly crumpled, the side of his hull badly scored and standing rigging damaged, Herrmann’s mood was equal measures of relief and contentment to have completed his race.

“I am happy with the result, definitely,” remarked Herrmann.

Jean Le Cam is due to finish this evening. With his 16hrs 15mins of time allowance if Le Cam passes the line before 20:34hrs UTC he will take fourth from Herrmann and if he passes only before 20:57hrs he will displace Thomas Ruyant (Linked Out) from fourth.