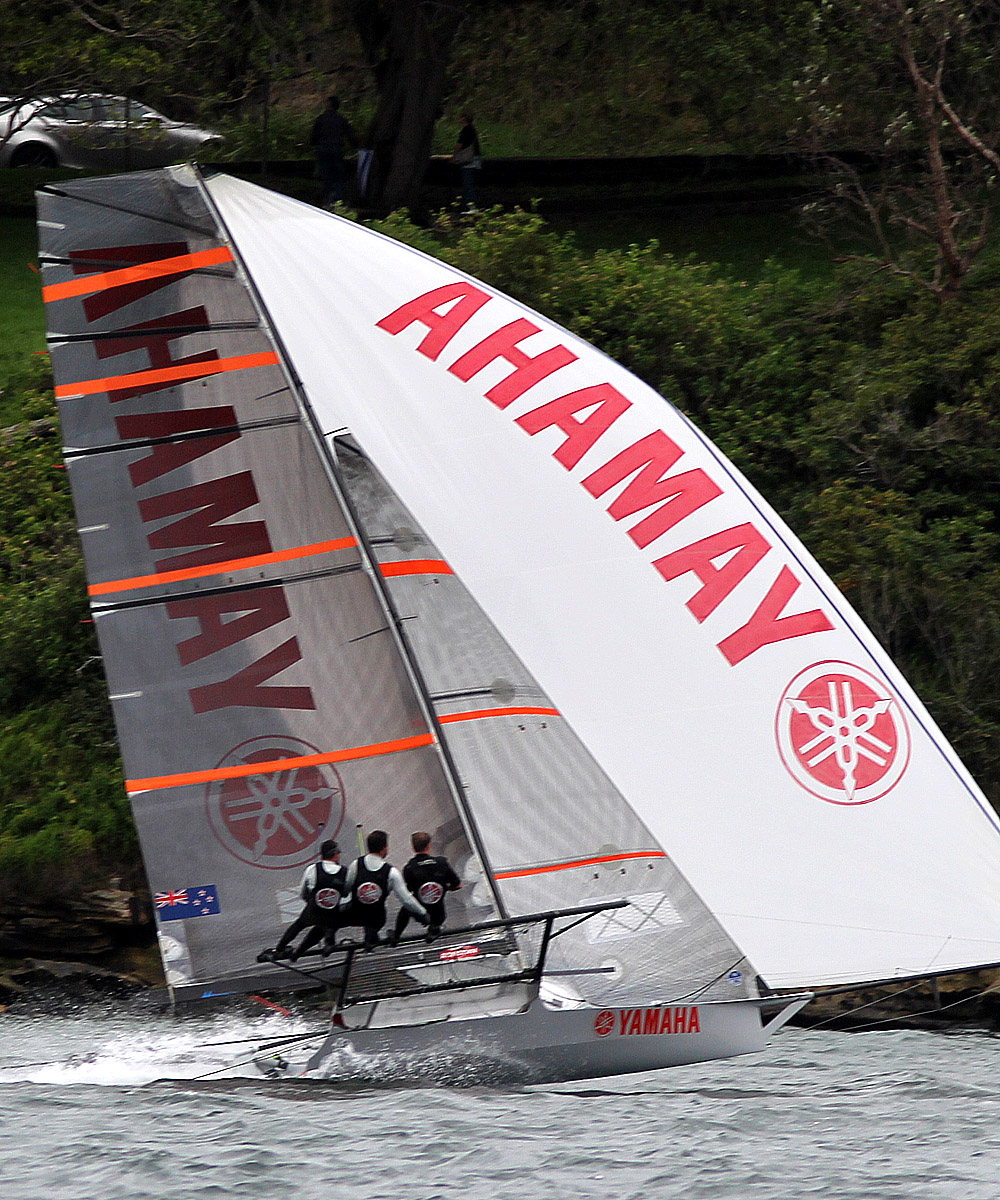 New Zealand’s Yamaha 18ft Skiff team responded brilliantly to a dramatic week when they dominated the high class fleet in Race 6 of the 2017 JJ Giltinan Championship on Sydney Harbour today.

Despite today’s domination by David McDiarmid, Matt Steven and Brad Collins on Yamaha, the 2017 title has been won by Michael Coxon, Trent Barnabas and Dave O’Connor on Thurlow Fisher Lawyers.

Thurlow Fisher has a maximum total of 19, regardless of what might happen in tomorrow’s Race 7, and no other team can match their score.

The only possibility of an alternative result depends on the protest the Yamaha team has against a ruling made during the week, which significantly changed the team’s final score.

Yamaha returned to the form the team showed in the first two races of the championship and won by a massive 3m42s in today’s race.

Coopers 62-Rag & Famish Hotel continued their consistent form throughout the championship to take second place, 30s ahead of Appliancesonline.com.au.

The spinnaker run from the Clark Island to Obelisk produced some brilliant sailing and spectacular viewing for the spectator fleet but little change in the order at the head of the fleet..

On the following leg back to Rose Bay, Yamaha was superb as the team opened up a 30s lead over Coopers-Rag, Thurlow Fisher, C-Tech, De’Longhi, Appliancesonline, Yandoo (John Winning), Knight Frank (Riley Dean) and The Kitchen Maker (Stephen Quigley).

Yamaha’s superiority was total as the team continued to increase the lead on every leg of the southerly course.

The race for second place became a three way battle between Coopers 62-Rag & Famish Hotel, Appliancesonline and Thurlow Fisher Lawyers with only a few secs. separating the skiffs as they approached the Rose Bay mark on the second lap of the course.

While the race for second place was close, Yamaha’s lead at that point was 3minutes.

With more good wind predicted for tomorrow the race to fill the placings behind Thurlow Fisher Lawyers should be sensational.

After the race David McDiarmid said:  “Going into the race we decided to become more aggressive, and smoked them.”

“We’re obviously disappointed that the regatta is going to be decided in the protest room.”

Race 7 (last race of the JJ Giltinan Championship) will be sailed tomorrow at 3pm.

The race will be live streamed from the Camera Cat and the drone, a world's first. Head to 18footers.com to watch the race live or catch up later. You can also follow all the action on the International 18ft Skiff Facebook page and @18skiff on Twitter.