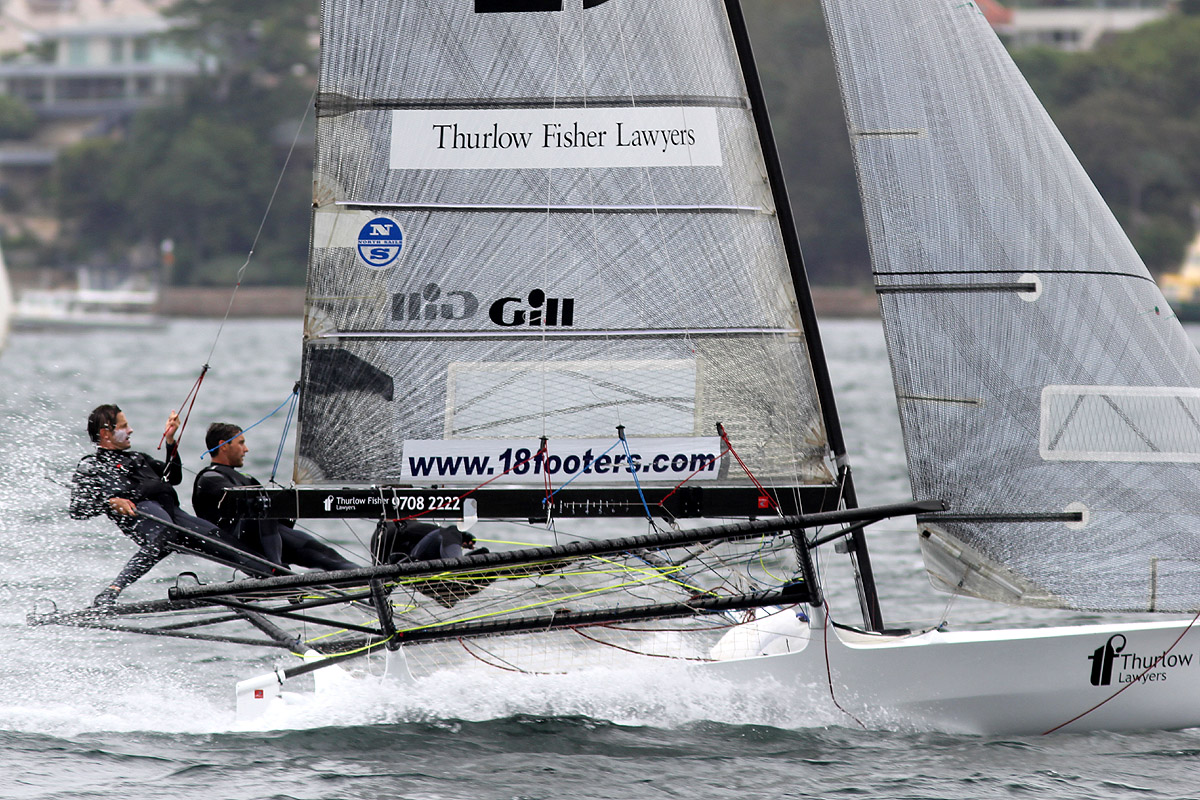 The Thurlow Fisher Lawyers team of Michael Coxon, Dave O’Connor and Trent Barnabas were already declared 2017 JJ Giltinan 18ft Skiff champions before today’s race but there was tremendous interest on the result as only five points separated the next six boats.

With a SSW wind, ranging between 15 and 25-knots, meeting the 26-boat fleet it was going to be a real test for all teams over the long South course.

Desperate to prove what might have been with a little more luck, the New Zealand Yamaha team (David McDiarmid, Matt Steven, Brad Collins) scored their fourth win of the regatta in brilliant style.

Yamaha and the new champion Thurlow Fisher Lawyers gave spectators a glimpse of power sailing in the fresh wind before Yamaha gained the upper hand to win by 1m44.

Coopers 62-Rag & Famish Hotel (Jack Macartney, Peter Harris, Mark Kennedy) continued their consistently good form to finish 21s behind Thurlow Fisher, and this was enough to give the team second place overall in the championship with 25 points. Thurlow Fisher’s winning score was 16 points.

Yamaha’s win today gave the team a total of 28 points, which was enough to finish third ahead after beating fellow New Zealander C-Tech (Alex Vallings) on count back.

Fifth place was Appliancesonline.com.au, skippered by David Witt, who retired from the skiffs today, on his 46th birthday.

What followed was an unbelievable spinnaker run to Obelisk which produced many spectacular rides and wild capsizes.  It was carnage and chaos and became survival for several teams.

Once the race settled down on the work back to the Rose Bay mark Yamaha took a narrow lead from Thurlow Fisher, Coopers-Rag, C-Tech and Harken with the rest of the fleet well back.

Thurlow manager to head Yamaha at the bottom mark but Yamaha was unstoppable on the following windward leg and was never headed over the rest of the course.

Club racing resumes next Sunday at the Australian 18 Footers League when the club hosts the annual Queen of the Harbour, Alice Burton Trophy race. The club’s regular spectator ferry will follow the race, leaving Double Bay Public Wharf at 2.30pm.