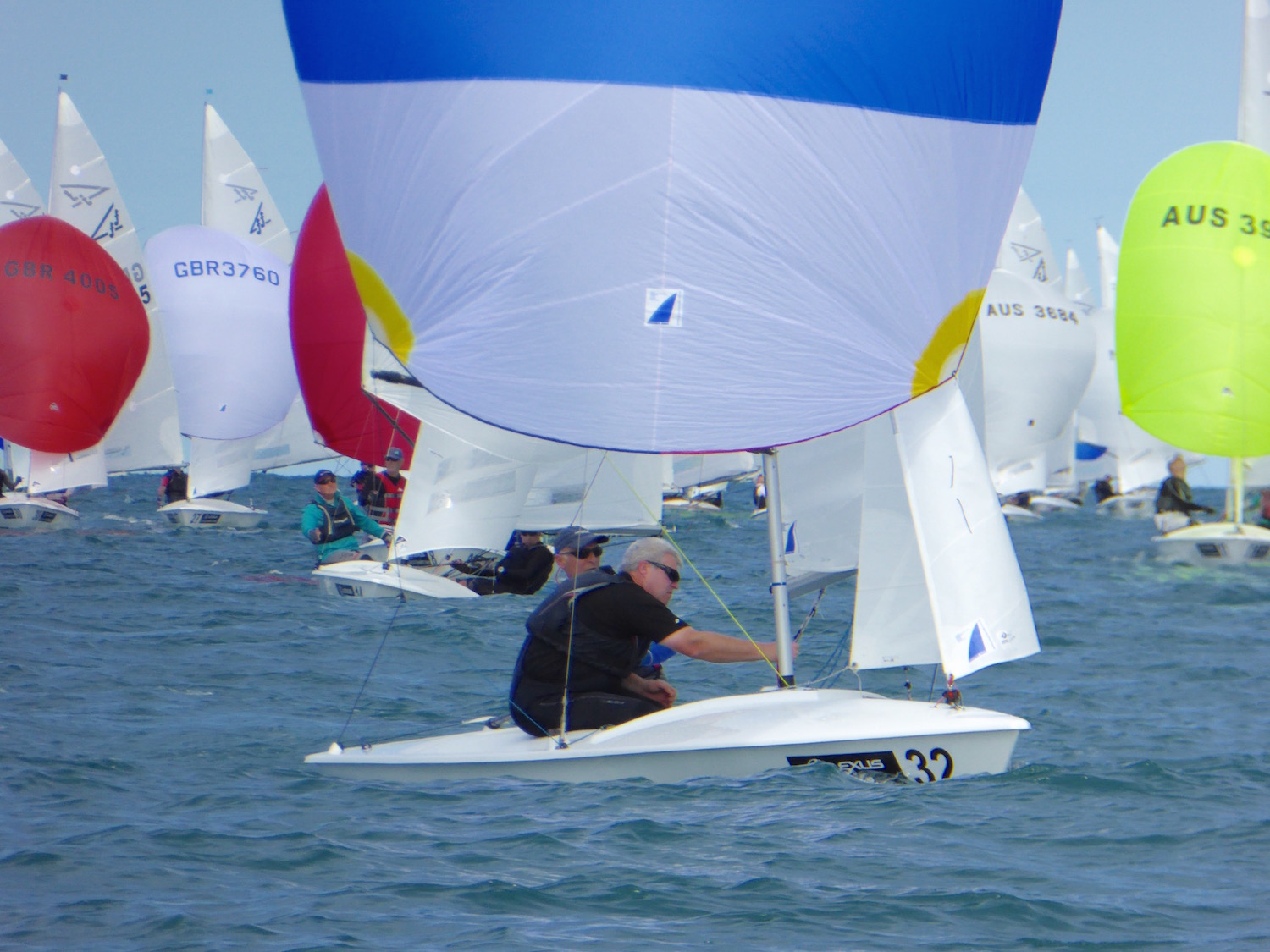 The last day of the 21st Lexus Flying Fifteen World Championship turned out to be a real cliff hanger. To finish on a high, Napier delivered on the weather with a warm sunny day and  9 – 11 knots of breeze.

The final race was delayed for about an hour as the NE/E breeze kept shifting  from side to side causing two general recalls. On the third attempt the PRO got racing started with a 1.1nm beat into a sloppy chop in Hawke’s Bay.

The two title contenders were at each other from the 5 minute gun with the Brits, Steve Goacher & Tim Harper playing cat and mouse with Nick & Janet Jerwood (AUS) never losing sight of each other.

After a clean start under U flag, the fleet were split across the course with a slight bias to the middle left hand side upwind. The first rounding was really crowded with a whole raft of New Zealand boats leading the field. Locals Hayden Percy & Scott Pedersen led from Murray Gilbert & Jonathan Burgess from Royal Akarana YC in Auckland. Third round was a female skipper, Susan Thompson sailing with crew Cameron Taylor (AUS) from Daveys Bay in Victoria.

The following run turned dramatic, Goacher & Harper turned the spreader mark right on the stern of Nick & Janet Jerwood, both crews down in about 20th place. A collision from a luffing incident on the downwind leg ended up with a red flag on each of the lead boats along with a small hole in the Jerwood’s boat. The Jerwood’s rounded the gate in the top 10 but Goacher & Harper had dropped places to the mid 20’s, having done turns.

The second lap was more of the same, 9-11 knots with the breeze flicking regularly left and right. Davy & Huett begun to extend their lead from a charging Greg Wells & Richard Rigg (GBR).

There were a number of crucial place changes in the final leg to the finish but Davy & Huett held firm to take their first gun of the regatta, fellow Brits Wells & Riggs crossing second and Yu & Nelson recovering to 3rd.

The Jerwood’s crossed in 4th and Goacher & Harper in 21st but sadly the final result of the championship would have to be decided in the protest room.

After a lengthy hearing Nick & Janet Jerwood were disqualified from the final race handing the title to the British team.

Steve Goacher was a very happy man winning his 4th world title nearly 20 years after his last win in 1999. However he was even more pleased for Tim his crew of the last two years as it was Tim’s first world title. He claimed it was one of the tougher championships he had raced in 25 years or more of Flying Fifteen sailing.

By finishing the last race in 6th, the Kiwis Gilbert & Burgess rose to 3rd on the overall podium overtaking Percy & Pedersen as first kiwis. Aaron Goodmanson & crew Alister Rowlands made up the third Kiwi boat in the top ten.

Hayden Percy & Scott Pedersen however have the honour of being first Silver boat with an impressive 6th place overall in the Open rankings. First Classic division boat was Nicholas Heath & Philippa Noon from the UK.