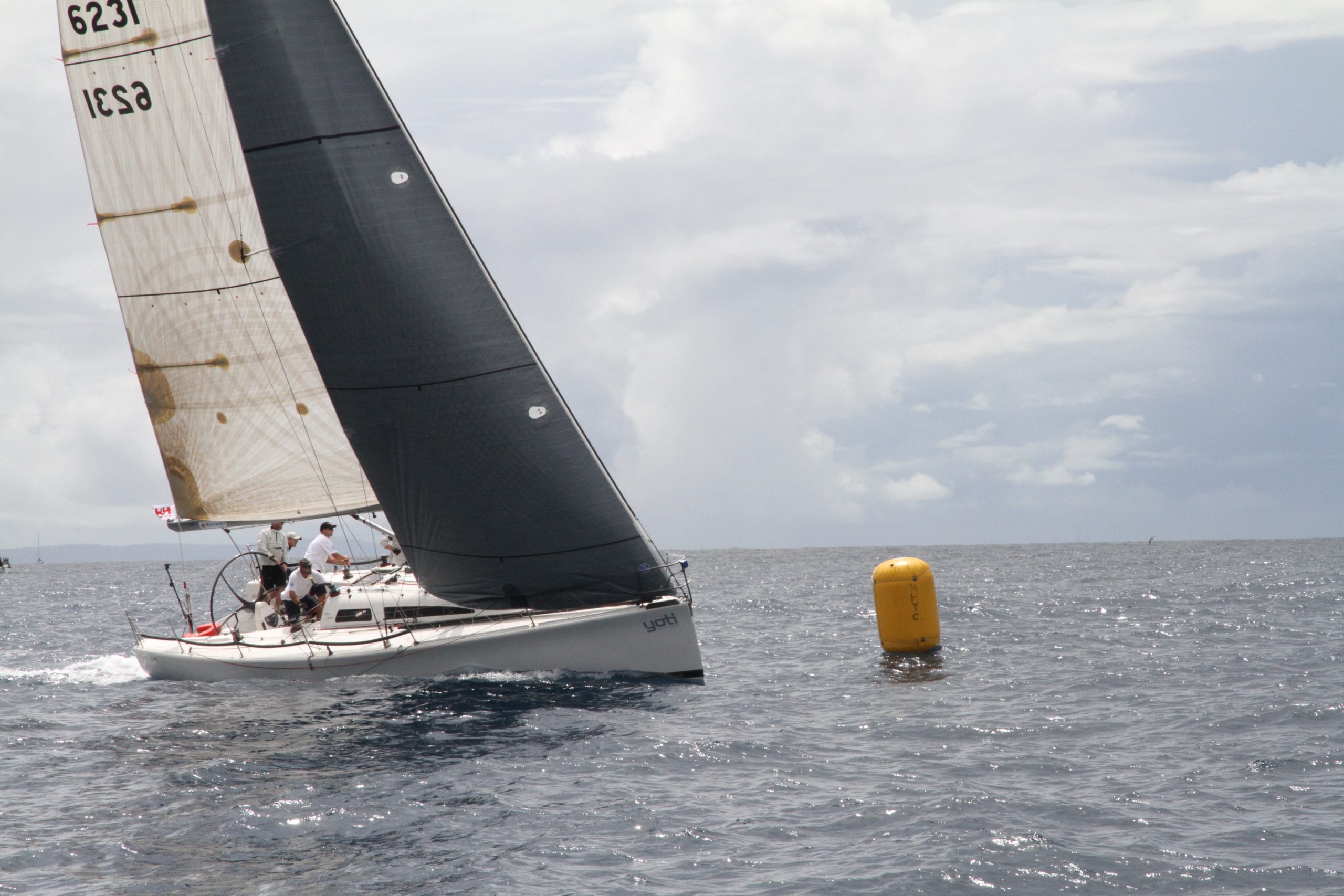 Kirwan Robb’s highly fancied Ikon38, is looking slick at the end of Day 1 of the Sydney 38 OD International Championship at Middle Harbour Yacht Club, winning three from three races today to be named ‘Boat of the Day’ and cart off the North Sails prize.

Robb’s Victorian entry, nominated the boat to beat, is living up to expectation. His nearest rivals at the end of the day are Richard Holstein’s Next, which scored a third and a pair of second places, and Renaud Gerardin and Mana Malmezac, one of two entrants from New Caledonia, who have chartered Calibre.

The New Caledonians, representing Cercle Nautique Caledonien, came in over the top of Rick Welch’s The Bolter in Race 3, ending the day with 4-7-3 results. The Bolter was looking better in the earlier two races with 2-3 results, but dropped to 10th place in Race 3 and now lies fourth, just a point behind Calibre.

Ikon38, representing Hobsons Bay Yacht Club, clinched victory in Race 1 by two minutes from The Bolter from the RPAYC on Pittwater, with Next from the CYCA in third place, 17 seconds astern of The Bolter.

In Race 2, the Victorians dominated again, to beat Next by just under a minute, with The Bolter hot on her heals, 21 seconds behind. Ikon38 backed up in Race 3 to take the gun from Next and Calibre in a closer finish of under a minute.

This evening Kirwan Robb said he and the crew had enjoyed the mixed conditions. “The first race was quite light, around 8 knots, with the wind flicking 30 degrees. It was quite shifty all day. We sailed the second race in 12 knots and the third in 18 to 21 knots – a bit of everything,” he said.

“I really enjoy one-design racing compared to fleet racing for the obvious reasons,” added Robb, citing Next as their main competition today. “They are quite quick and were right on us in Race 3.”

Renaud Gerardin and Mana Malmezac were thrilled with their day’s work, though a little surprised to find themselves third overall. Like Robb, they enjoyed the mix of conditions, “Although we were better in stronger winds, especially under spinnaker – compared to others who drove too hard and broached,” Malmezac said.

Gerardin, who is the skipper of the pair said, “This is the first time we’ve raced here individually, or as a crew. We brought a good crew from three boats in New Caledonia. We also have two Australian guys with us, Leon (Leon Thomas, previous owner of the Sydney 38 Guilty Pleasures he sold to the French pair) and Dan (Hayden). Both are from Townsville.

“We spent one day training in 'Frendlish', he said of the initial language barrier of boat talk between the French and English.

On today, Malmezac commented: “We were not expecting to do so well, especially after making so many mistakes in the first two races. But finally by the third race, we got it all together – we worked together better.

“It is also the first time we have raced in a one-design fleet. We came here for the experience, to make new friends and get an understanding of how the other guys are sailing their boats – how to make them go faster,” added Malmezac, who with Gerardin has been sailing Guilty Pleasures for three years on home waters, but not in one-design configuration.

An overcast day with a couple of downpours thrown in, Sydney 38 crews saw it all on the opening day of their competition. However, it did not dampen anyone’s enthusiasm in this history-making Championship, racing providing the panacea. This evening, all were enjoying the Norths Happy Hour at Middle Harbour Yacht Club.

Racing continues tomorrow with a further three races on the menu, provided the weather plays ball. Officials are hoping to complete nine races in total.