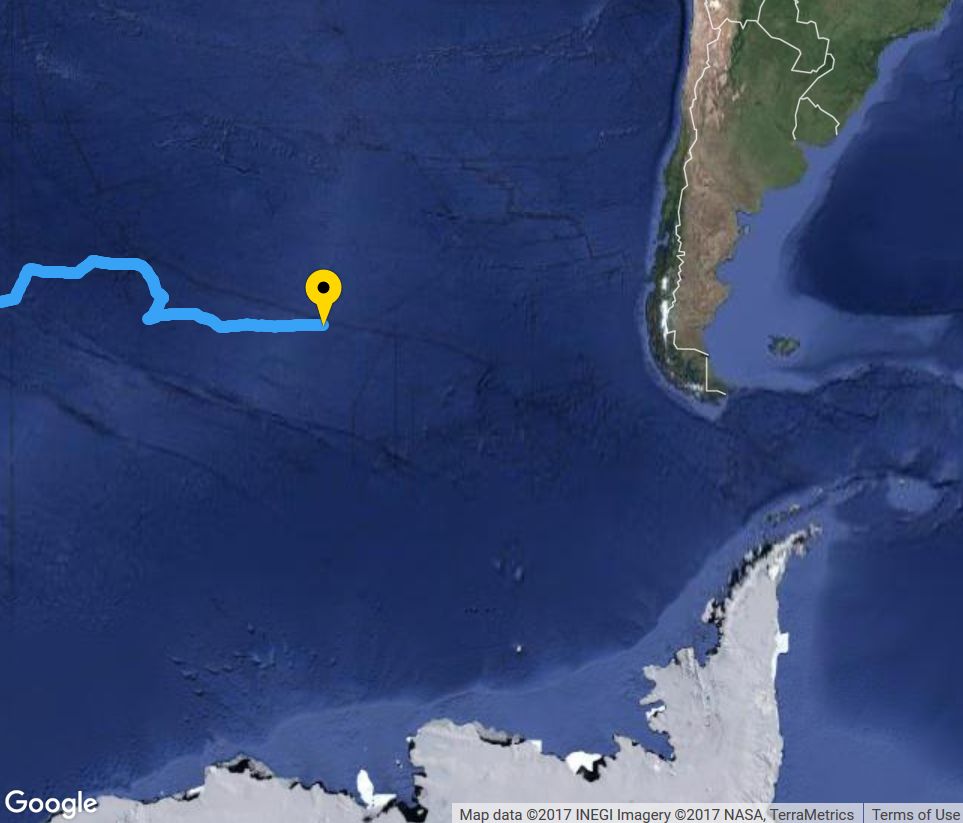 Lisa Blair is attempting to become the first woman to circumnavigate Antarctica solo, non-stop and unassisted. Just over a month into her journey, she is approaching Cape Horn. To check on her progress, click on the tracker.

Early this morning at just after 5am I sailed past Point Nemo officially the furthest point in the ocean from land anywhere in the world.  I passed roughly 80nm to the south just as first light crested the horizon. I was for a short time closer to the International Space Station than anyone on land. It’s all a bit surreal when you think about it like that. Keeping up with the milestones I have also passed 120 W today which would see me pass gate 6 of the Antarctica Cup Race Track were I racing and I am also now less than 2,000 nm from Cape Horn.

A big day all round.

I didn’t again get much sleep last night but it was due to computer issues and not boat issues so that is sort of acceptable.  As a result I was trying to sleep in, but the winds had other plans. So, at 8am I was up to change over the head sails.

Through the night, I was sailing with 1 reef in the main sail and the No 1 jib in winds of 10-15 occasionally 20 knots from the SW.  As the morning progressed I was seeing more 20-25 knots and didn’t wish to risk losing my jib, so I crawled out of my nice, dry and warm sleeping bag to be greeted with a cold, wet and windy morning.

Just to wake me up I copped a few face fulls of spray…  After I changed the jibs over I crawled right back into bed. 9am might sound like a nice sleep in however I didn’t get to bed until 3am, so it was a scant few hours of broken sleep. I didn’t have much success in getting more sleep. I lay there tossing and turning, mentally wishing myself back to sleep only to lay on my side and stare at the increasing winds coming up on the B&G Zeus display.

By 10am the winds were gusting 25-30 knots and were beginning to push the boundaries of my mainsail so once again it was out of my nice warm, dry bunk and on deck to enjoy the cold, wet and windy morning to put the 2nd reef in the main.  To be honest, I don’t think that I had woken up very well before getting on deck and was a little muddled in getting the job done.  I did manage to get the reef in and stay mostly dry.

When I think that I am just going to be on deck only for a short time I tend to only put the Zhik Isotak sallopetts on (the foul weather pants) and not worry about the jacket, most of the time this works okay however occasionally there is that nasty wave that just wants to coat me in sea spray.  This morning was one such morning. With an increasingly messy swell slapping the hull of Climate Action Now, I copped more than my fair share of salt water. I should really learn my lesson and just put the jacket on….

As the conditions are getting colder I need to make sure that I am not getting myself drenched or cold.  In these conditions and the conditions that I will be sailing in shortly, getting cold can cost you your life.  Right now, its around 10 degrees so its manageable.  I am back to wearing a beanie and fleeces around the boat and to bed.  Tomorrow I will do a wardrobe change and a baby wipes bath to freshen up but there is no way I am washing my hair until things warm up a bit.

Also as the conditions get colder I need to be more aware of ice…  I am very fortunate to have Jeff and Sue, from National Maritime College step forward to help as key members of my shore side support team.  One of the most important things that they are doing at present, is monitoring the movement of known Icebergs in the regions that I will be sailing through as I round Cape Horn.

There is normally a higher density of icebergs on the eastern side of Cape Horn but there is still the odd one that travels north on the western side.  Aside from the B&G 4G radar that I have on board for spotting icebergs I am also using the sea temperature.

If the sea temperature is rapidly falling I am likely to be encountering ice.  It is unlikely to have ice in a sea temp above 8 degrees, so for most of the trip Bob (METBob) has been doing a great job of keeping me in the warmer temperatures. This may not be possible all the way around the Horn. So, we just want to have an idea of the location and density of the icebergs in the area so that I can plan ahead, with exclusion zones. That way I know when it’s safe to go fast, or, when I need to back off and go slow to reduce the risk of collision.  The next 3 weeks of this trip are for me the most challenging and dangerous. It pays to keep playing it safe, especially here.

In more positive news I had a great chat today with Tracey from Twentieth Letter.  Tracey has been doing a great job in helping me share my story with you all.  She also works with D'Albora Marinas.  D'Albora Marinas were my first real sponsor on this trip.

I had just bought my yacht then. At the time it was named Funnel Web. I had no money left and nowhere to keep her.  I called up Brett from D'Alboras and arranged a meeting.  After some discussion and me letting them know what I was trying to achieve they offered for me to keep my boat at any of their marinas.  I am not sure if Brett at the time realized how big of a deal this was to me.  I will be forever grateful for their support……and for offering Climate Action Now a home.  So when Tracey and I spoke, she let me know that all the crew at D'Alboras were thinking of me and wished me well……..Thanks guys.

Well it appears that the winds are settling down a bit here to mostly 15 knots from the NW allowing me to sail a board reach for comfort and even lay a perfect course of 090 True.  I will keep the 2nd reef in overnight as there is more weather due tomorrow…….and apparently, lots of rain.  Bob from METBob just has the caption WET on his weather forecast for tomorrow…

Today dawned very cold, bleak and wet… Just as Bob (METBob) forecasted…  The swell continued to increase through the night causing Climate Action Now to get shoved around a bit…  I was again cautious on getting a wave large enough to come in through the hatch so I firmly closed the main companionway hatch just to be sure.  I am glad that I did because when I ventured out this morning there was mild carnage on deck.  I must have had a really big wave over in the night knocking me down. Whilst I remember the boat getting knocked over I don’t recall hearing the amount of water needed to do what was done.

When I got on deck there were ropes trailing behind the boat from where they had been ripped off the winches. Also, and probably the most telling was the fact that the wood from my centre deck hatch was lying tangled in the safety railing.  Before I left Albany one of the extra safety features we added to the boat was the fact that we doubled up the Perspex hatches…  We unfortunately did not have enough to do this to all the hatches so the middle hatch, that did not need to be able to have the sunlight come through, Paul who was a great help, covered it with a sheet of 18 mm plywood. It had grooves cut out to allow me to open the hatch from the deck.

The idea behind doing this was that if I was 'pooped' by a wave, meaning a big greenie wave breaks on the boat with a lot of force, I was less likely to stove in the hatch.  In this case the hatch was fine but the sheet of plywood was ripped off.  I managed to retrieve the plywood and when I get conditions that are dry again I will re-glue this back on.

Also though the night I must have been shoved over so much that the boom was once again in the water with enough force to break the preventer line again.  I had the pleasure of enjoying a cold walk forward to the bow to retrieve it and re-set.  I have been getting some great surfs in on the waves so it was actually a lot of fun on the bow watching the water shoot past at 15 knots +.  The biggest surf that I have had is 17.2 knots today so going well and hopefully bringing up my averages.

The winds though out the night were from the NW at 25-30 knots with a swell up to 5 meters. They seem to have started easing a touch. I am now seeing more 20-25 knots and the winds are backing towards the west so I will be making a course towards the NE tonight.  The swell has also lessened a bit but not dramatically so.

It does feel like I am in a bit of a washing machine at the moment and it tends to make even the simplest of tasks difficult.  Not to let that stop me from feeding myself. I decided to make some pancakes today.  They were delicious, smothered in Dick Smiths Foods Strawberry Jam. A nice change from my usually meals.  The food has been great. The only trouble is that all the freeze-dried pasta dishes taste exactly the same. There is only so much of the Cheddar Pasta one can eat…  We did arrange it so that I could add things to the meals like beans, mushrooms, corn or olives. These do help break up the flavours…….. but it’s still the same tasting cheese……..Having pancakes is a real treat just for that flavour change.

I just wanted to add that as I was writing this we just surfed a wave at 18.7 knots so that is the record for the trip so far…  Wahoo.

Well there is not much else to say here. I am just enjoying the opportunity to go fast without the need to push the sails.  I still also have the No2 reef in the main sail and a small amount of the No2 Jib out.  Conditions are likely to keep the same for the next few days at least.