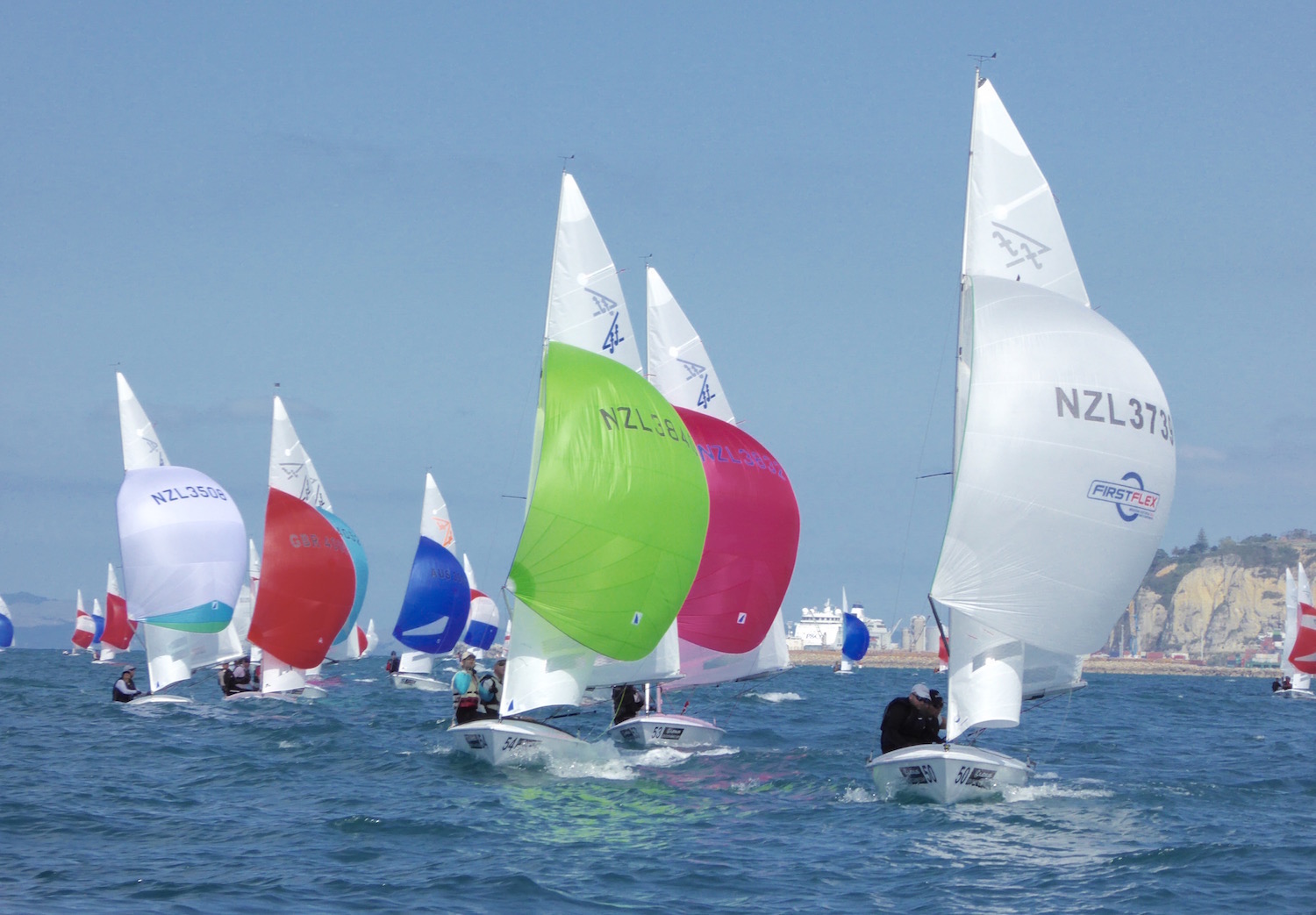 The fleet in Race 6 of the World Championships. Photo Johnny Fullerton.

The penultimate race of the 21st Luxus Flying Fifteen World Championship in Napier has set up to be a mouth watering finale with the title hanging in the balance.

Another warm sunny day on Hawke’s Bay with a hint of a stronger breeze earlier on, which toyed with the PRO and ended up proving a real challenge. Twice race management were in start sequence when the radio call came in from the top mark that the breeze was swinging from 70 – 100 degrees and back again.

On the third attempt race 6 got underway around 1400hrs in another light and shifty 7-10 knot NE/E breeze with a bit of chop thrown in for good measure. The start was clean but with an almost constantly oscillating breeze it proved a real test to find the best way to tackle the first upwind leg.

Both the championship leaders Steve Goacher & Tim Harper (GBR) and Nick & Janet Jerwood started mid line and sniffed out the best track to round with a few boat lengths lead over a large pack including Charles Apthorp & Alan Green (GBR/IRE), fellow Brits Greg Wells & Richard Rigg and Hayden Percy & Scott Pedersen, the first of a bunch of kiwis.

The run proved a bit pedestrian as the breeze softened and the chase pack had to fight for room at the gate, sometimes rounding up to five boats abreast. Once ahead the Goacher machine went into cover mode never letting the Jerwood’s off their radar scanner. Apthorp & Green also managed to hold their position but the fight for the remaining top 10 places remained tight all the way round the triangle.

As Goacher & Harper rounded the gate to head up to the finish, the sea breeze came in with a final flourish sucking the lead group in to make the final  work leg interesting. Everything the Jerwoods did to get away from the clutches of the Goach, it was to no avail, the British team crossing for the third bullet of the championship with 1 race to go.

Apthorp & Green finished 3rd ahead of a big cluster of boats. The young kiwis, Percy & Pedersen were back in form in their 28 year old Silver fleet boat grabbing a useful 4th and Brits David Mckee & Mal Hartland a solid 5th.

So the world title hangs in the balance with one ore race to go. Steve Goacher & Tim Harper stand 5 points ahead of Nick & Janet Jerwood but neither crew can afford any mishaps carrying double digit discards.

Canberra sailors Matthew Owen & Andrew Reed had a day to forget finishing 25th, their discard, but remain in 3rd overall, ahead of a log jam of crews on 39 & 40 points. It looks like a classic finale between the British and Australian pairs but neither can afford a slip up in the final race with only one discard.

Race 7 is scheduled for a an earlier start time of 1000 hrs (local) with no racing starting after1300hrs (local).

Provisional Results (Top 10 of 57 entries, after 6 races with 1 discard)