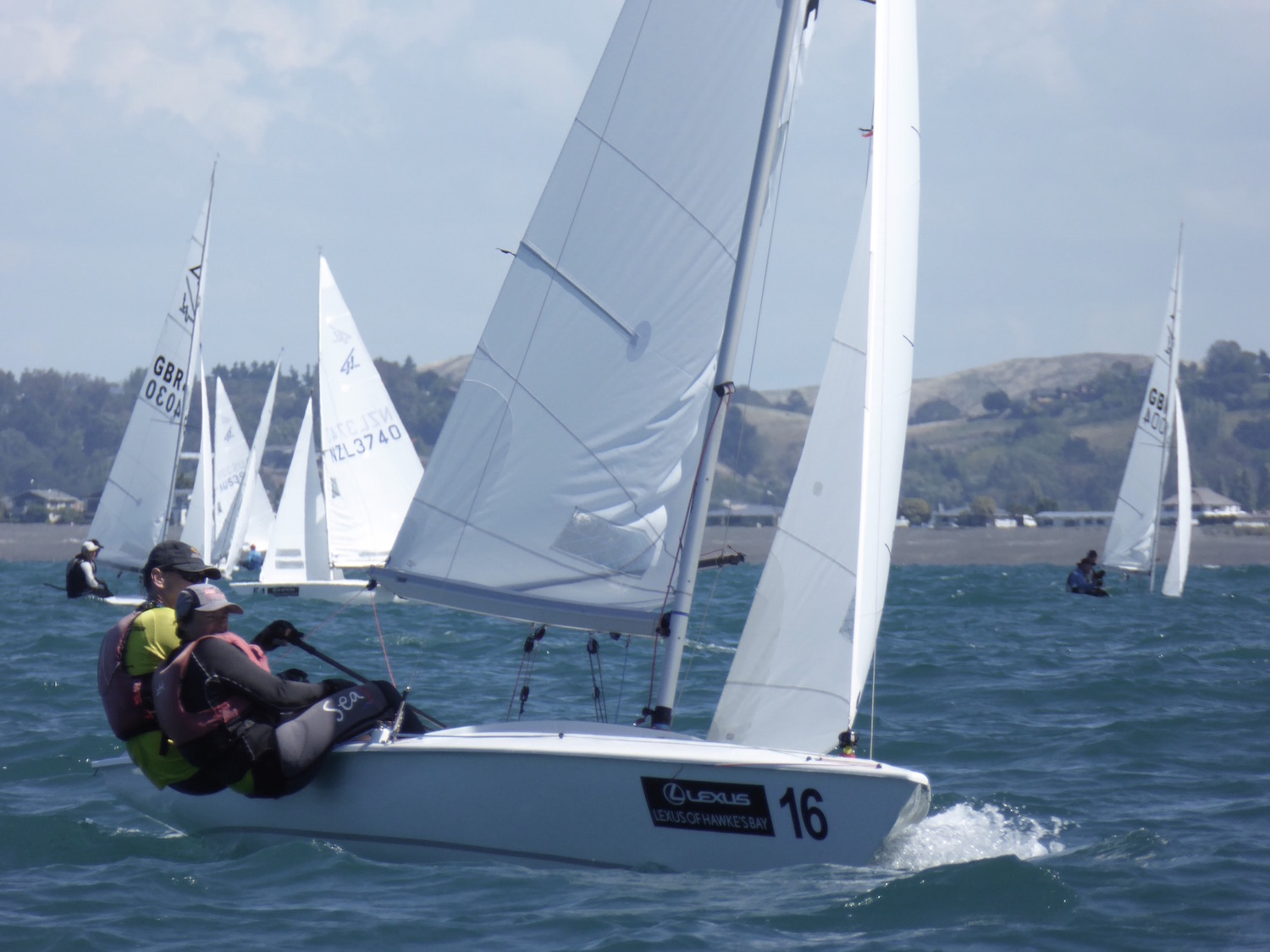 What a difference a day makes, the sun came out for day four of the 21st Lexus Flying Fifteen World Championship in Napier. Race 5 was sailed in a light NE breeze shifting from 40 – 50 degrees, but with a short chop rather than the rolling swell of the last few days. As they say in these parts, the lambs were just about to leap out of the paddock, allowing the bigger crews to get out on the side decks and even do a bit of hiking!

57 Fifteens were spread across the start line in a far more conventional start but with new choices over upwind tactics. Whilst the majority of the fleet decided to work the left, a late shift favoured the boats that had really banged the right corner hard!

Of these Kiwis, Brian & Bridget Kent from Royal Akarana YC in Auckland, sailed a blinder to round the top mark in the lead from the Flying Flamingos, Lewis Davies & John Radnell from Daveys Bay YC in Australia. (These guys are easily recognisable with their pink hats, kite and accessories! Another Kiwi boat in the Silver fleet, Wade & Lyle Tresadern from Bucklands Beach in Auckland, rounded in 3rd.

Most of the usual suspects were a bit deep in the pile with work to do but It only took the first run to see some of the downwind specialists starting to make their move. Steve Goacher rounded in the top 15 but scythed down the middle of the course to put pressure on the leaders at the gate. Nick & Janet Jerwood (AUS) were also working their way into the mix after a late change of gate choice got them on the right side of the race course for the beat.

Back upwind the pressure stayed a bit more reliable but a new leader was emerging in David Williamson & Craig Morton (AUS) from Mordialloc SC in Victoria. The Aussie crew had the two previous world champions chasing them down both legs of the triangle. Behind them there was a lot of shuffling in the lead pack, places could be won or lost on the boat handling at the gybe mark. But the real test was the final working leg to the finish. This is where the real champions work their magic and there was little surprise when the smiling faces of Nick & Janet Jerwood from South of Perth YC, were seen tacking up to the line with a reasonable lead. They crossed to take their first gun of the championship and leap back into contention for the tile with two days to go.

“We had two very difficult legs, we got to the top mark in the low teens and managed to get the bottom of the run wrong and lost a lot of spots there, I am guessing we were about 20th there. Things stated to get a bit better from there, we made a late decision to change gates at the bottom and it was a really good decision, put us on the right side of the course and we were able to pick a few good shifts which put us back into the top 10 and we took a few more as we progressed up to the beat to 4th so that was the best leg of the regatta for us so far from 20th to 4th,” said Nick Jerwood.

“Two days to go but we still have to sail the best race you can, the wind is way too localised, you can be 4 or 5 boat lengths away from somebody and be in totally different conditions so you just have to sail the best you can with what you have at that point in time. It is just going to be a case of how fast you can get round that race course. We actually used toe straps for the first time in the regatta today and it was great so I am looking forward to more of that in the final two days.”

Second to finish was Steve Goacher & Tim Harper (GBR) who are now able to drop their 19th place to take the overall lead in the regatta by four points. With the discard coming into play, the overall leaderboard sees a few changes with previous leaders Matthew Owen & Andrew Reed (AUS) from Canberra, slipping to 3rd overall, and Ashley Smith & Adam Kingston from Queensland (sailing under the Hong Kong flag), dropping their 35th to jump up to 4th in the overall classification.

With two days to go the pressure is rising and so is the barometer. There is a promise of more warm weather and a bit more breeze which might just suit some of the bigger crews who enjoy a bit of planing activity for which the Flying Fifteen is famous.