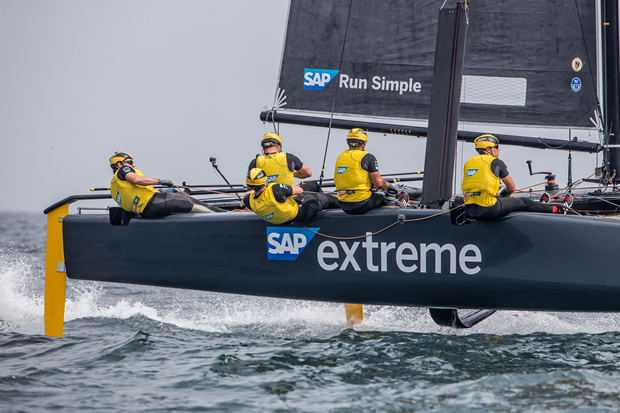 Conditions became lighter, but this managed to heighten the intensity of the racing between the 11 teams on day two of the GC32 Championship in Muscat, Oman.

With the wind dropping from nine knots to five, general recalls became the norm, as crews jockeyed to get the best starts. This forced Principle Race Officer John Craig to start races under a ‘black flag’, disqualifying premature starters. However this is indicative of the high level of competition in this GC32 inaugural championship, being run by the GC32 International Class Association in association with OC Sport.

The black flag claimed the scalps of two favourites in race two – Team Tilt and SAP Extreme Sailing Team, which were penalised with maximum points. However as the wind dropped, SAP Extreme Sailing Team came into its own, winning the third and fourth races comfortably. Despite this Oman Air, winner of today’s second race, continues to lead at the end of day two. Ernesto Bertarelli and the Alinghi crew had another consistent day elevating them to second.

Once again the day started badly for Jes Gram-Hansen and Rasmus Køstner’s SAP Extreme Sailing Team, when a halyard lock jammed just before the start of race one. As helmsman Adam Minoprio explained: “We had to lash it up there and we only managed to get our shore guy off just in time before the start.”

Minoprio was furious with himself for their black flag start. “We had a good half an hour to think about it and be angry with ourselves, but what’s done is done: You just have to get out there and do the best you can, otherwise you won’t catch up with the leaders.”

Fortunately SAP Extreme Sailing Team was on the money at the start of the final two races and, with neither side of the course being advantaged, managed to hang on, undoing the leaderboard damage they had done in race two. “We could foil comfortably downwind, whereas others getting a bit of gas from other boats took their time to get on the foils. The rich get richer when you get clear air,” concluded Minoprio.

If SAP Extreme Sailing Team was a case of ‘zero to hero’, the opposite was true for Sébastien Schneiter’s young Swiss crew on Team Tilt. They won the opening race of the day, as they did on day one, and despite conditions turning similar to their native Lake Geneva for the last two races, they finished the last race in a disappointing seventh.

“We are used to sailing on a lake, but not with foiling boats,” admitted Schneiter. “It is hard to get the boat going well and you have to be smooth and not aggressive. In the last race we were too impatient and we ran across the boat, which was not good. So we still have work to do and improve our consistency, but overall we are happy.” Team Tilt ended the day fourth overall.

As conditions became lighter, new faces began appearing higher up the leaderboard. Aside from Team Tilt, Land Rover BAR Academy was another team heading for the Red Bull Youth America’s Cup starting to show some of its potential, posting a third in race two and a second in the final race.

Skipper Rob Bunce explained: “In a big fleet like this, if you can get a good start and get to the first mark in a good position, then that often becomes a chain reaction for the whole race. We have been working on our starting, so we are happy to get those two results. In the last race, we were as close as you could have been without being over – it is pretty high tariff, but if you are a couple of seconds late, everyone will pass you, so you have to take the risk.”

Tomorrow is a layday for the GC32 Championship. Many crews will be taking part in safety training laid on by the GC32 Class Association. In this they will learn about how to use emergency oxygen cylinders underwater. This is mandatory equipment that all of the GC32s are obliged to carry.

This evening competitors are enjoying the GC32 Championship Crew Dinner, supported by the Yacht Racing Forum. Racing will resume on Friday.