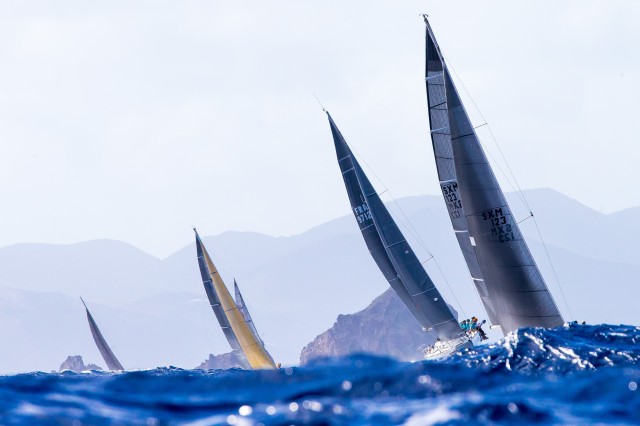 With the curtain set to rise on the eighth edition of Les Voiles de St. Barth in just over six weeks (10 to 15 April, 2017), no fewer than 57 boats are already signed up for the event. Among these will be an impressive and rather unique fleet of Volvo Ocean Race boats, including both VOR 60s and VOR 70s. It's a scenario that comes with the promise of some incredible battles and a series of top-flight “races within the race.”

For this 2017 vintage of Les Voiles de St. Barth, eight teams in the fleet will be sailing on boats designed for the Volvo Ocean Race (formerly the Whitbread Round the World, a famous crewed around-the-world yacht race split into legs). Four are VOR 60s (boats used for the race between 1993 and 2002) and four are VOR 70s (used from 2005 to 2012).

A Lithuanian crew will sail the VOR 60 Ambersail (ex Assa Abloy 1, designed by Bruce Farr and launched in 2001). Having already raced at Les Voiles in 2015 and 2016, Przemyslaw Tarnacki and his men will be competing in the event for the third consecutive year, keen to better their previous results of sixth and fifth place in the Maxi 2 class.

However, a small group skippered by Chris Stanmore-Major on Challenger are sure to make life difficult for them. Challenger was originally built for the 1997 edition of the Whitbread but ultimately failed in her bid to circumnavigate the globe due to insufficient funds at the time. As a result, she ended up being shut in a shed for several years with just a few rare excursions to compete in the Newport to Ensenada Race and the Transpac. Nevertheless, she was entirely refitted early last season and is now highly competitive.

Clashes at Every Stage of the Game

Also expected are some fantastic “races within the race” among the 70 footers. Among the heavyweights racing off St. Barths will be SFS II, which is none other than the ex Puma, previously skippered by Ken Read during the Volvo Ocean Race 2011-2012 and Groupama 4's sistership, the winning boat in that particular VOR edition. She boasts a great power-to-weight ratio, and better still, she can count on Lionel Péan's wealth of experience to push her to her limit, despite the stiff competition.

“There will be four of us VOR 70s, which translates as four boats with the same problematics,” said Pean, whose track record includes a victory in the Solitaire du Figaro in 1983, a first place in the Whitbread on Esprit d'Equipe in 1986, and a World 12m JI Champion title in 2001. “This will inevitably be very motivating, especially with regards to the rating, as the VORs are rather disadvantaged in relation to the Maxis that race in the same class. In addition to doing well overall, being the first VOR 70 to finish will obviously be a challenge for us within the fleet of Les Voiles de St.Barth. We know that the races will be full-on as we're all very close in terms of performance.”

The Marcelino Botin-designed Warrior, which finished second in the Volvo Ocean Race 2011-2012 as Camper–Team New-Zealand with Chris Nicholson at the helm, will be skippered by American owner Stephen Murray, a very familiar face on the podiums of major stateside races. Among his key achievements are a victory in the New York Yacht Club Race Week aboard a TP 52, first place in the Annapolis to Newport Race aboard a C40 mki, and a win at Quantum Key West Race Week on a Carkeek 40.

Trifork/L4 is another force to be reckoned with. Formerly Ericsson 4, the boat was built in 2008, the same year in which she set the 24-hour distance record (in crewed configuration aboard a monohull) after devouring 596.6 miles (a record which was only beaten six years later, in 2015, by Comanche with a distance of 618.01 miles). And it's no accident that she won the Volvo in 2009 at the hands of Brazilian sailor Torben Grael. She's sure to be a contender in St. Barthélemy again, too.

“This boat is perfectly fitted out and equipped,” said SFS II Skipper Lionel Péan. “In fact, she beat us two years ago in Palma. Her skipper is none other than the Dane, Jens Dolmer, who has an America's Cup campaign to his credit, as well as a victory in the World Maxi Championships and two Volvo Ocean Races, the first on Ericsson 4 in 2008-2009 and the second on Team Brunel during the last edition. She'll really be on her game.”

Péan, who has the benefit of already being familiar with Les Voiles de St. Barth, having participated under the colours of SFS (formerly Green Dragon) last year, added: “To my mind, together with Warrior and Trifork / L4, we're really going to have to work hard.”

The Mediterranean skipper also reckons the Monster Project led by Roman Guerra will be a cut above the rest. Indeed, this Russian boat (formerly known as Kostaka), participated in the 2008-2009 edition of the VOR. She may not be as efficient as her rivals, but since she was bought in January 2013 by Andrew Budgen and Fred Schywn from Project 1 Racing Team, she has been equipped with a new sail wardrobe and then thoroughly revised and optimised. One thing is for sure, the results for Les Voiles de St. Barth 2017 will make very interesting reading!