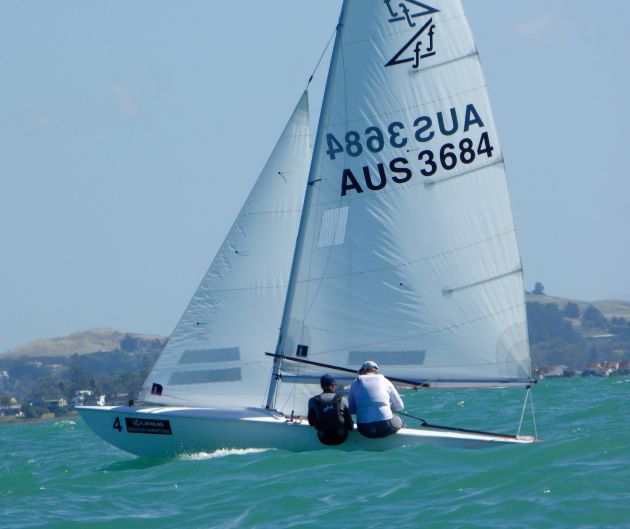 Day 3 of the 21st Lexus Flying Fifteen World Championship in Napier and another semi – overcast day with light winds on Hawke’s Bay. For a while it looked like an on schedule start for the fleet of 57 boats but after two general recalls the PRO was frustrated by the persistent shifts in direction from 60 – 100 degrees and had to signal a wait for the breeze to settle.

Race 4 got started mid afternoon in 6 – 10 knots with a flicking breeze which just remained with enough pressure to sail a two lap course of one windward/leeward lap followed by a triangle and beat to the finish.

At the third attempt the fleet got away to a clean start under the U flag with quite a split in choice of upwind strategy. Whilst the middle right upwind had been the best bet all week, finally the breeze shifted far enough into the E/NE sector to tempt enough competitors into trying mid left as an alternative.

A new leader appeared at the top mark in the shape of Peter Milne & Trevor Williams from Black Rock YC/Gippsland Lakes in Victoria, Australia. Local kiwi crew, Hayden Percy & Scott Pedersen from Napier SC were back in the front pack but lurking close behind was yesterday’s winner and former world champion, Steve Goacher sailing with Tim Harper from the UK.

Downwind to the gate the vast majority of the fleet searched for the pressure on the offshore side of the race track. Again Goacher and crew Harper used all his expertise to shrink the lead of the lead boat to a boat length by the bottom gate. Places from 3 – 6 continued to shuffle with Charles Apthorp & Alan Green (GBR/IRE) making good gains along with Brits Greg Wells & Richard Rigg.

Upwind again and another split in tactics, this time the cunning Goacher / Harper combination rounding in the lead to lead the pack on the triangle. The chase pack was close, the Aussies, Milne & Williams holding off Apthorp & Green but early pace setters, Percy & Pedersen dropping off the pace.

Today the breeze held in pressure but the British team of Goacher & Harper could not be slowed, covering their opponents all the way to chalk up a second bullet of the championship. Apthorp & Green squeezed in at the boat end of the line to snatch second in the final boat lengths to the finish line from Milne and Williams (AUS). FFI Commodore Peter Rooke sailing with Martin Arrowsmith (AUS) sailed an excellent final work leg to cross in 4th with the persistent local kiwi crew, Percy & Pedersen picking up 5th in their 20 year old (Silver) category Flying Fifteen.

However with four races sailed, the overall leaders are Matthew Owen & Andrew Reed from Canberra, Australia who are the only crew to have recorded single digit results by continuing to dig themselves out of difficult positions when buried in the pack. They lead the regatta by 7 points from Goacher & Harper who are chasing their 4th world championship win.

Matthew Owen describes his tactics: “We actually ended up with three really good starts today if you include the two general recalls, so we were pretty good off the line. We got a great start, turned over and about 50 boats down at the pin end crossed us so we were pretty much back of the fleet 30 seconds in, so we had to chip away quite hard to get back into it. We got a couple of nice shifts at the top but we were on the back foot from the start.

Race 5 is scheduled for a 1300hrs (local) start with similar light breezes forecast.