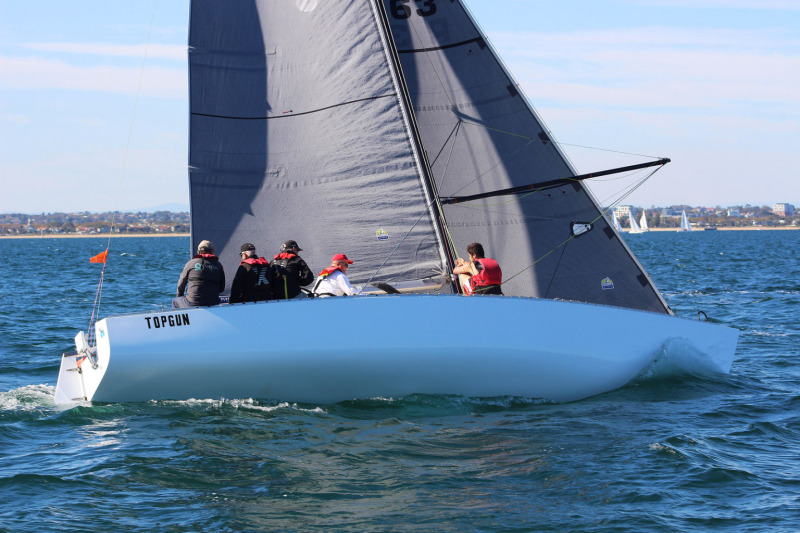 Racing in today’s Victoria’s prestigious Association Cup interclub yachting teams event has been abandoned after the death of a yachtsman in a MOB (man overboard) incident on Port Phillip this morning.

Max Peters went overboard from the Adams 10 class yacht Top Gun during the first race of the Association Cup in WNW winds estimated at 25 knots but gusting well over 30 knots. Seas were rough on the bay, at 1.5 to 2.5 metres.

Sandringham Yacht Club was conducting the series, with up to four races planned. The first race started at 11am after the Bureau of Meteorology had downgraded an overnight gale warning to a strong wind warning.

Under yacht racing rules the event would not have gone ahead had the gale warning remained in force.

“We were surprised that the race committee started the racing in these conditions,” the skipper of another yacht said. “Overall, the wind had eased somewhat but there were some big gusts coming through and there were still big waves.

“Another skipper said they recorded a gust of 37 knots on the first spinnaker run,” this skipper added.

Unofficial reports said a crew member from another competing boat dived into the bay and Peters was pulled out of the water, but failed to respond to resuscitation efforts.

Top Gun was representing the Royal Yacht Club of Victoria in the Association Cup with Peters listed as the skipper on the entry sheet. It is not known if he was the helmsman.

“Max was a very popular member of the club,” fellow members of the Royal Yacht Club of Victoria said, with club officials lowering the club burgee to half-mast as the distraught crew of Top Gun came ashore.

The Adams 10 class yachts that race on Port Phillip do not have guard rails but it is understand that all crew of Top Gun were wearing life jackets.

Sandringham Yacht Club has not replied to requests for comment on the incident, including whether the Association Cup will be re-sailed next Sunday, 22 April, as provided for in the Notice of Race.

It is with deep regret that we share the tragic news of the death of Max Peters whilst competing for the Royal Yacht Club of Victoria in the 2018 Association Cup on Sunday 15th April.

The Association Cup is an inter-Club event that is run on an annual basis and is traditionally hosted by the last winners being Sandringham Yacht Club. Racing was being held on Port Philip in the waters between Brighton and Sandringham with 18 yachts competing from three Clubs around the Bay.

It is understood the boat “Top Gun” broached whilst sailing downwind which in turn led to Max falling overboard. After being recovered from the water, very sadly Max could not be resuscitated.

Our sincere appreciation goes to all the people who assisted with the rescue effort.

At this time our thoughts are foremost for Max who was known as a true gentleman of our sport.

Our heartfelt condolences go out to his family, crew and friends.