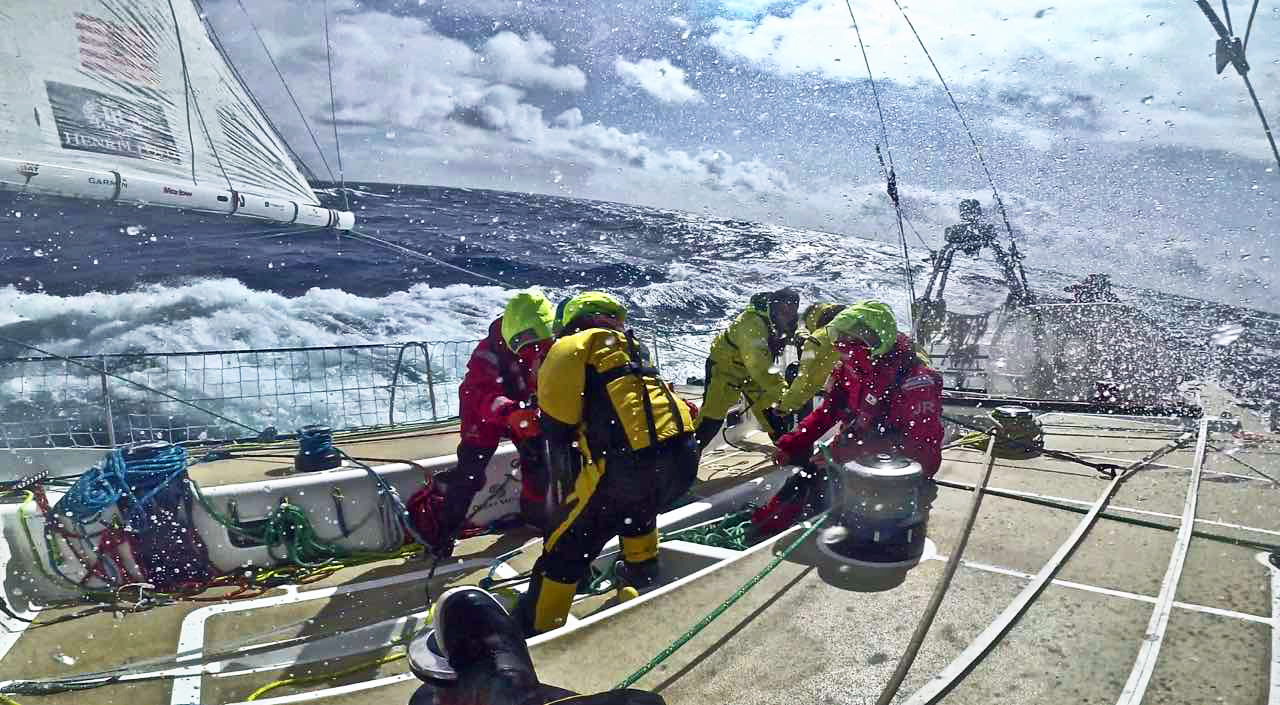 With the Mighty North Pacific Ocean relatively calm to what was experienced by the fleet a few days ago, the leading Clipper Race teams are relishing the return to full race mode as they enter the final stretch of the 5,600 nautical mile marathon to Seattle, USA.

The phenomenal sea state has settled due to the incoming high and will remain that way for the next few days. With the current conditions moderate to rough and winds between 20 and 30 knots, the top three remains unchanged for a third consecutive day, with Qingdao still holding off Sanya Serenity Coast and Unicef.

Just 15 nautical miles separates first and second, and Sanya Serenity Coast skipper, Wendy Tuck, whose team is currently on top of the overall race standings, is enjoying the chase, saying: “Surfs are still happening, there has been some sail changes and we know Qingdao is just up in front well over 10 nautical miles and under 20 so we are chasing – nice to be back to race mode.

“This will just get more intense as the boats behind and further south have a nicer angle to come up and join our party, so we are staying focused.”

The third placed Unicef is another 15 nautical miles astern and skipper Bob Beggs reports: “Following a night of steady progress and decreasing conditions, Unicef has shaken out her wings, all reefs gone and the Yankee 3 replaced by the Yankee 1. We continued all day to make steady progress towards the eastern limit of the 45 degree north virtual beach.”

Race Mode is also back on for HotelPlanner.com and Visit Seattle, after both teams completed much needed repairs to their mast tracks.

Following a constructive chat with the Clipper Race Maintenance Team, skipper of the fifth placed HotelPlanner.com, Conall Morrison, says: “After a morning of tapping, bending, grinding, filing, fitting, more filing and some spray lube, the mast track was back in business. At 1300h local we were pretty much able to go from three reefs to full mainsail and get back on the race pace again.

“I reckon over the 24-hour period that we had the problem we lost about 30 miles to the competition. Which given what happened isn't so much, hats off to the team for keeping the wheels turning, the boat going in a straight line making headsail changes happen and analysing the weather info whilst Anna, GG and myself were busy.”

On Visit Seattle, the skipper was also full of praise of her crew for managing not only the tough conditions, but also carrying out the same tricky repairs.

Nikki Henderson comments: “This morning, two hours after dawn, we finally finished repairing the mast track. Just before the storm hit, two sections of the track that our mainsail slides up on ripped out the mast. Both sections were about 30cm long and at the height of the second spreader (around 15ft up) which meant we have not been able to fly a mainsail for nearly three days now.

“Jerome, (world's most amazing engineer and team player), has spent around 12 hours up the rig in a terrible sea state left over from the storm – not an easy job on land let alone at sea.”

Over the next 24 to 48 hours, the fleet will begin the second chance at bonus points for this race, the Elliot Brown Ocean Sprint.

With up to three crucial bonus points up for grabs, Garmin skipper Gaetan Thomas, whose team has earned four Elliot Brown Ocean Sprint bonus points to date, says: “The wind is still a bit gusty and the sea state a bit big, but now we are flying our Code 3 (Heavyweight Spinnaker) and are having a good speed in the right direction!

“Not far to the Elliot Brown Ocean Sprint, we'll see what we going to have there, but with the fleet not really compressed, it does smell like a lottery sprint.”

To follow the fleet's progress to the Elliot Brown Ocean Sprint and for the rest of the race to Seattle, keep an eye on the Clipper Race Viewer. You can also read the skipper Blogs in full in the Team Pages section of the website or find out the latest from the crew in the Crew Diaries.

The latest Estimated Arrival Times into Seattle can also be found on the Clipper Race Website. The fleet was originally expected to finish the 5,600nm Race 9:

The Race to the Emerald City from Qingdao to Seattle and arrive into Bell Harbor Marina between Saturday 14 and Thursday 19 of April, but conditions in the early part of the race means the boats are now expected between Thursday 19 and Saturday 21 April.