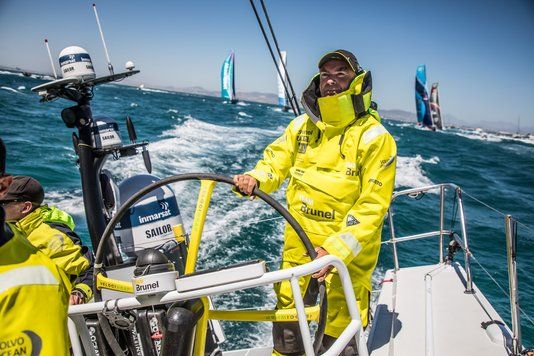 With only 11,000 nm of the 45.000 nautical miles to go till the finish in The Hague. Team Brunel is in third place overall and has the second elapsed time sailed in the legs till now. While Vestas 11th Hour racing and Sun Hung Kai / Scallywag still have to dock in in Itajai, Team Brunel is ready for the In Port race on Friday April 20th and leg start on Sunday April 22nd.

Bouwe Bekking: We are ready
Bekking: “If we had to leave today, we are ready. This last week our technical shore crew did an excellent job, helped by the boatyard and of course our own technical and painting specialists from Royal Huisman. In the meantime the sailing team had the opportunity to take some rest and spend some time with our loved ones. For me personally, it was the first time I was home in eight months so yeah that’s pretty special. But even when you’re at home you keep thinking about and preparing for the next leg. For example I did some high altitude training and went to the Norwegian snow with my wife and daughter.”
Balcaen back on board for Leg 8
For the next 5.700 nm leg from Itajai (Brazil) to Newport (US) Louis Balcaen (BEL) returns on board Team Brunel. The talented 29 year old sailor that sailed Leg 3, 5 and 6 and who is sailing his second Volvo Ocean Race. He will replace Thomas Rouxel (FRA). Rouxel has other commitments with the Gitana project in the next weeks.
Bouwe Bekking: “From the beginning we knew that Louis wouldn’t be available for the whole race and it’s good to have him back here in Brazil. In the next leg it will be about steering and trimming. With Peter, Louis, Kyle, Alberto and myself, we have five excellent helmsmen.”
Australian Olympic silver medallist Nina Curtis has been confirmed in the crew after a good performance in the recent Southern Ocean leg.
Crewlist Team Brunel – Leg 8:

Bonus point up for grabs

At the end of the race there will be a bonus point for the team with the lowest total elapsed time sailed. With just over 22 hours between Dongfeng in first place and Team Brunel in second, it looks like this competition will be between these two boats. Third placed Team Mapfre is almost four days behind on elapsed time and this seems insurmountable, assuming all three boats do not encounter any major problems in the remaining part of the race.
Standings based on total elapsed time
VIDEO
Team Brunel shore crew reacts to win in Leg 7