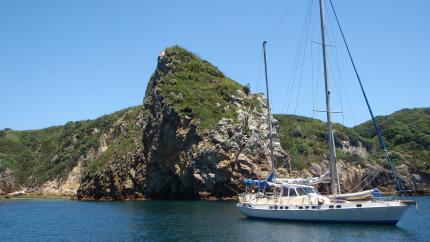 Yachties and boaties have a natural affinity with the environment and it’s why Yachting New Zealand have launched a wide-ranging environmental strategy they hope will prompt real change within the sport.

The national sports organisation for yachting and boating in this country have targeted five key areas in their strategy: clean yacht clubs, a strong network of organisations who work together, lowering the impact events have on the environment, a focus on technology and greater education and awareness.

They presently have 109 member clubs around the country who, together with about 50 class associations, have a membership base of about 30,000. There are also tens of thousands more who frequently enjoy New Zealand’s coastline and lakes.

“We recognise we all need to make changes to help protect and enhance the marine and coastal environment for the enjoyment of all,” Yachting New Zealand chief executive David Abercrombie said. “We are in a good position to influence our network of clubs and other stakeholders and help bring about positive change.

“We really want to make people aware of what they can do to help, no matter how big or small, and can provide guidance as well as lead by example.”

Yachting New Zealand will engage a handful of ambassadors to help spread the message, starting with Conrad Colman and Bianca Cook.

Colman is not only the first Kiwi to sail in the Vendee Globe but also the first person to finish the solo, non-stop race around the world without the use of any fossil fuels. He shot to international acclaim when he finished the race despite breaking his mast three days from the finish in France and despite being swept overboard in the Southern Ocean during a storm.

“This is something that’s dear to my heart,” Colman said. “I have raced around the world three times and seen the impact we are all having on our environment.

“I’m excited to be working with Yachting New Zealand to help spread that message that looking after the environment should be second nature rather than an after-thought. Sailors have a greater appreciation for the environment and can become advocates for the wider population to protect our Tangaroa.”

Cook recently completed the Volvo Ocean Race with Turn the Tide on Plastic, whose aim was to increase awareness on sustainability while competing in the round the world race. She was the first New Zealand woman to feature in the race for 16 years.

“I’ve been one of the lucky ones who has had the amazing opportunity to sail around the world,” Cook said. “Ocean health is so important and seeing first-hand the effects that we have had on our oceans is devasting. All of us need to make changes in our lifestyles to make a change for our future.”

Yachting New Zealand have identified a number of initiatives to help make a difference, ranging from leading an annual beach clean-up day and developing a clean club standard to investigating the use of battery-powered coach boats and ensuring all Yachting New Zealand events eliminate single use plastics.

Yachting New Zealand will also develop a range of educational tools for clubs and organisations to use as well as partner with the likes of the Sir Peter Blake Trust, Sustainable Coastlines and LegaSea, who are an arm of the New Zealand Sport Fishing Council.

“We’re really looking forward to working with Yachting New Zealand and seeing positive change within the boating community, particularly amongst their young people who will be our next generation of ocean leaders,” Gibson said. “Sir Peter Blake was a passionate champion for the ocean environment and this strategy aligns with his ambition to re-start people caring for the environment, especially our oceans and the issues they face.”