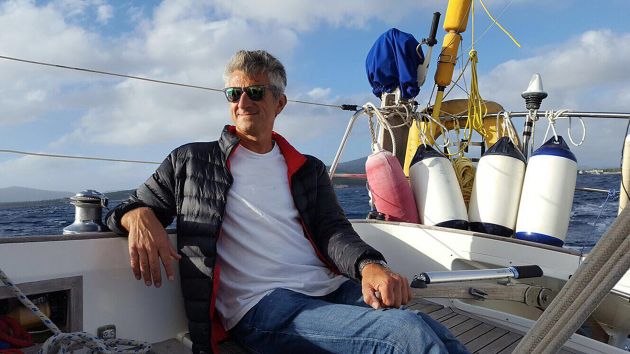 Day 9: French skipper Philippe Péché and his Rustler 36 PRB have opened up a 45 mile lead over fellow Frenchman Jean-Luc Van Den Heede (Rustler 36 Matmut) over the weekend after enjoying a fast run down the Portuguese coast. At 06:00 UTC today, Péché was closest to the Moroccan coast among the 16 remaining GGR sailors and on a rhumb line course for Rubicon Marina Lanzarote, the first gate in this 30,000 mile solo non-stop circumnavigation.

Those taking a more traditional westerly route led by Dutchman Mark Slats (Rustler 36 Ohpen Maverick) and Estonian Uku Randmaa (Rustler 36 One and All) 150 miles offshore, have not enjoyed quite the same boisterous NNE wind-stream and have fallen 64 and 84 miles behind respectively.

Ertan Beskardes withdraws from the Race

, the Turkish-born British skipper from Bournemouth informed Race HQ by satellite late on Friday July 6 that he was pulling out of the Race for personal reasons. Later, he informed followers on Facebook: “Not talking to my family regularly to share the daily experiences has sadly taken the joy and happiness from this experience. These feelings gradually got worse until nothing else mattered except to talk to them. This wasn't an experience I was prepared for and this decision was the hardest I've ever had to make in my life. I love solo sailing but felt very lonely with no contact.”

Ertan has pulled into La Corunna where his wife joined him yesterday. Another factor that may have swayed his decision was the fact that his HF radio was not working, which would have left him at a disadvantage communicating with the outside world and receiving weather forecasts from a worldwide network of Ham radio enthusiasts.

Others are facing practical as well as emotional issues. Both Frenchman Antoine Cousot sailing the Biscay 36 Métier Intérim, and his US/Hungarian rival Istvan Kopar (Tradewind 35 Puffin) are experiencing continued problems with their wind vane self steering systems – essential gear when they reach the Southern ocean – and for the moment are spending long hours steering by hand. Cousot has indicated that he intends to pull in at Lanzarote to make repairs but not yet declared whether he intends to gain outside assistance. Entrants are allowed to seek shelter to make repairs at any time without effecting their solo non-stop status, but face being relegated to the Chichester Class if they enter port or seek assistance.

Another to report problems today is Race leader Philippe Péché who, like Beskardes, is experiencing problems with his HF Radio. His current course is likely to carry PRB straight into an area of light airs blocking the fleet en-route to the Canaries.

If Péché can maintain his current 6knot average, the Frenchman could complete the 520 miles to the buoy off Marina Rubicon early Thursday morning, but a period of light airs forecast over the next 24 hours could extend that ETA to Thursday night/Friday morning – and shake up the standings. It is all to play for!